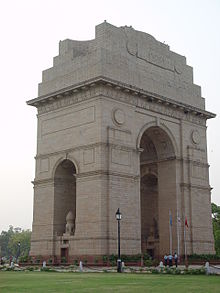 India Gate, one of the largest war memorials in India commemorating the 90,000 soldiers who died during World War I and the Afghan Wars 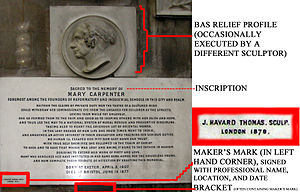 A wall-mounted memorial to Mary Carpenter in Bristol Cathedral with an example of a signed and dated maker's mark by monumental mason J. Havard of London

A memorial is an object which serves as a focus for memory of something, usually a person (who has died) or an event. Popular forms of memorials include landmark objects or art objects such as sculptures, statues or fountains, and even entire parks.

The most common type of memorial is the gravestone or the memorial plaque. Also common are war memorials commemorating those who have died in wars. Memorials in the form of a cross are called intending crosses.

Online Memorials and tributes are becoming increasingly popular especially with the increase in natural burial where the laying of gravestones, or memorial plaques, is often not permitted.[1] Online tributes and memorials create a way for family and friends from various countries to interact and share memories and photographs.[2] This is becoming more and more popular as it provides a private space that can be easily reflected upon at any time.

When somebody has died, the family may request that a memorial gift (usually money) be given to a designated charity, or that a tree be planted in memory of the person.[3]

Sometimes, when a high school student has died, the memorials are placed in the form of a scholarship, to be awarded to high-achieving students in future years.