Chiclayo (Spanish pronunciation: [tʃiˈklaʝo]) is the capital city of the Lambayeque region in northern Peru. It is located 13 kilometers inland from the Pacific coast and 770 kilometers from the nation's capital, Lima. As of 2011, Chiclayo is the fourth most populous city in Peru with a population of 629,990 (comprising 6 contiguous urban districts: Chiclayo, José Leonardo Ortiz, La Victoria, Pomalca, Reque and Pimentel) and the third largest metropolitan area of Perú.

Founded by Spanish explorers as "Santa María de los Valles de Chiclayo" in the 16th century, it was declared a city on 15 April 1835 by president Felipe Santiago Salaverry. He named Chiclayo "the Heroic City" to recognize the courage of its citizens in the fight for independence, a title it still holds. Other nicknames for Chiclayo include "The Capital of Friendship" and the "Pearl of the North".

Currently, Chiclayo is one of the most important urban areas of Peru. It is now the country's fourth-largest city, after Lima, Arequipa, and Trujillo. The city has a population of 738,000,[1] while the metropolitan area has a population of 972,713 (2009 - World-Gazetteer.com).

The city was founded near an important prehistoric archaeological site, the Northern Wari ruins, which constitute the remains of a city from the 7th-12th century Wari Empire.

Many different historical accounts tell of the naming of Chiclayo. Some attribute it to an indigenous man known as "chiclayoc" or "chiclayep" who transported plaster between the ancient cities of Zaña, Lambayeque and Morrope.

Another version claims that around the time that the city was founded, the area was home to a green-colored fruit called chiclayep or chiclayop which in the Mochican language means "green that hangs". In some towns in the highlands of Cajamarca, squashes are known as chiclayos, evidence that this fruit is the origin of the city's name.

Another source indicates that the word is a translation from the extinct Moche language and is derived from the word Cheqta which means "half" and yoc which means "property of".

Others say the Mochican language had words similar to the name, such as Chiclayap or Chekliayok, which means "place where there are green branches".

The 'Moche civilization existed from the years A.D. 100 to A.D. 800, occupying the territory which is now the northern coast of Peru in the Ancash, Lambayeque, and La Libertad regions of Peru. The area of current-day Chiclayo was part of this civilization.

This culture had a high understanding of hydraulic engineering as manifested by their canal system which allowed them to use rivers to irrigate their land. This allowed them to have a surplus of crops and a solid economy allowing their society to develop. The Mochicans also used copper in the fabrication of weapons, tools, and ornamental objects.

The Mochicans are considered the producers of the best ceramic artifacts because of the elaborate designs of the pottery. These designs represent religious themes, humans, animals, and scenes of ceremonies and myths reflecting their perception of the world. They are noted for their expressiveness, perfection, and realism.

This culture was formed towards the end of the Moche civilization assimilating much of their knowledge and cultural traditions.

The Lambayeque culture's civilization was divided into three phases or stages:

The Lambayeques excelled in architecture, goldsmithing, and navigating. 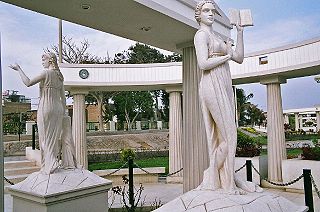 Parade of the Muses

In the early 16th century, Chiclayo was inhabited by two ethnic groups; the Cinto and Collique. The cheiftans of these ethnic groups donated part of their land for the construction of a Franciscan convent. This cesion of land was approved by the royal decree of 17 September 1585. Thus, with the advocation of Saint Maria of Chiclayo and under the direction of Father Fray Antonio of the Concepción, a church and a Franciscan covenant were erected at Chiclayo. At the time of construction of these Spanish-built edifices, the city of Chiclayo was founded.

Chiclayo, unlike most other Peruvian colonial cities such as Lima, Piura, Trujillo, or Arequipa, was inhabited by a largely indigenous population rather than Spanish colonizers. On 15 April 1835, during the republican era, the urbanization of Chiclayo was elevated to the category of city by the then president Felipe Santiago Salaverry. That same day, Chiclayo received the title of "Heroic City". The next day the Chiclayo Province is created of which Chiclayo becomes the capital.

During the Peruvian War of Independence Chiclayo was not indifferent to the patriot revolutionary cause, and supported it by suppling soldiers, weapons, horses, and other important resources to General José de San Martín's liberating army. All of this came to be under the supervision of the most progressive creole, José Leonardo Ortiz.

Soon after independence Chiclayo was still a small village. Nevertheless, due to its strategic geographic location, in future decades it became a rail, communications, and automotive hub. In 1827, Chiclayo was elevated to the level of villa. The progress of Chiclayo is evident in the early republican era by the naming of Chiclayo as a "Heroic City" in recognition of the services rendered by the Chiclayan people in the Peruvian War of Independence.

Chiclayo has a warm and very dry desert climate with the sun shining all year around. 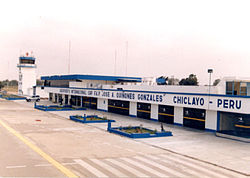 The city is served by the Cap. FAP José A. Quiñones Gonzales International Airport, which houses primarily domestic airlines, chartered international flights, and fuel supply services. The terminal has a runway of 2520 by 45 square meters.

There are currently four airlines that serve Chiclayo's international airport, some of which who offer daily service and others interdaily service. There are two schedules for this service one morning schedule and one afternoon schedule. There are flights to the city of Tumbes and especially to the city of Iquitos. The US-based Spirit Airlines has expressed interest in serving Chiclayo from its hub in Fort Lauderdale, Florida, USA.

Chiclayo, because of its location, serves as a point of interconnection for various cities of the Northeast of the country and has various bus companies which service cities such as Lima, Trujillo, Piura, Cajamarca, Chota, Cutervo, Bagua, Jaén, Chachapoyas, and Tumbes.

To adequately accommodate the transportation demand, the city is served by two different land terminals, one located towards the southern end of the city and another at the northern end on the Panamerican Highway.

A substantial number of bus companies have their own terminals, many of them located near the downtown of the city and in nearby areas. These interprovincial buses contribute to the congestion experienced in downtown Chiclayo. To try to solve the problem the city government has proposed a plan to build a central station in the city.

Regionally, there are various different public services such as combis, cousters, colectivos, which provide services within the districts and provinces of the department of Lambayeque. 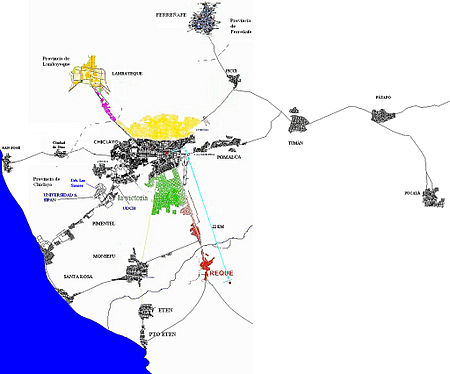 According to the Census of Population and Housing undertaken in 2007, 574.408 people inhabit the area within Chiclayo's cities limits or the six municipalities. The metropolitan area has a population of 930.824; it includes other nearby cities like Monsefú and Lambayeque in a ten minutes ratio by paved highway. Under the thirty minutes range are, in order of hierarchy, Ferreñafe, Santa Rosa, Eten, Illimo and Tuman. Chiclayo is at the center of Chancay River delta, in a fertile valley.

According to the planning director of Chiclayo, by 2020 the San Jose district belonging to the Lambayeque Province will be completely integrated with the city of Chiclayo. The district currently has a population 12.156 inhabitants. Currently most of the district is conurbanized with the rest of Chiclayo. 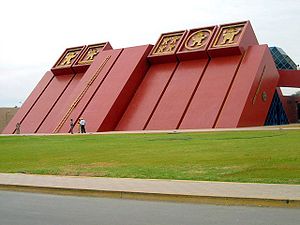 The following is a list of the universities located in Chiclayo:

The following is a list of museums in the area: 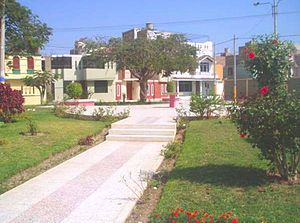