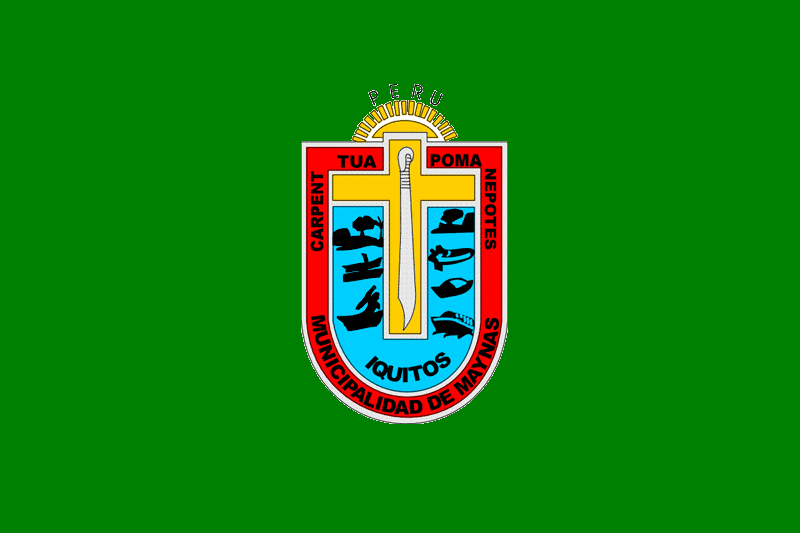 Iquitos is the largest city in the , with a population of 370,962. It is the capital of and . It is generally considered the most populous city in the world that cannot be reached by road.

Located on the , it is a mere convert|106|m|ft|0|lk=on|abbr=on above sea level even though it is more than convert|3000|km|mi|0|lk=on|abbr=on from the mouth of the Amazon at in , on the . It is situated convert|125|km|mi|0|abbr=on downstream of the confluence of the Ucayali and Marañón rivers, the two main headwaters of the Amazon River. Iquitos has long been a major port in the . It is surrounded by three rivers: the , the , and the Amazon.

The city can be reached only by airplane or boat, with the exception of a road to , a small town roughly convert|100|km|mi|0|abbr=on south. Most travel within the city itself is via bus, motorcycle, or ("mototaxi", "motocarro" or "motokar"). Transportation to nearby towns often requires a river trip via "llevo-llevo", a small public motorised boat.

The climate is hot and humid, with an average relative humidity of 85%. The wet season lasts from around November to May, with the river reaching its highest point in May. The river is at its lowest in October.

Iquitos was established as a mission in the 1750s, and in 1864 it started to grow when the was created and Iquitos became its capital. It is currently the seat of a . [http://www.catholic-hierarchy.org/diocese/diqut.html]

Iquitos was known for its industry through the of the first decade of the 20th century, and there are still great mansions from the 1800s, including the Iron House (Spanish: "Casa de Fierro"), designed by . The boom came to an end when rubber seeds were smuggled out of the country and planted elsewhere. The 1982 movie "", about the life of rubber baron Brian Sweeney Fitzgerald, was filmed near Iquitos.

Iquitos has become important in the shipment of from the to the outside world, and it offers modern amenities for the residents and tourists in the area. Other industries include , and production.

Iquitos is home to numerous research projects that cover the studies of ecology in relation to ornithology and herpetology. in particular owns a field station dubbed the . Founded in July 2001 under the direction of Dr. as a research facility dedicated to education, conservation, and the discovery of novel medicinal compounds from applied field chemoecology, the field laboratory strives to Survey and catalog the inventory of biological diversity found along the Yarapa River Basin while providing researchers with field experience in the broad range of disciplines necessary for this task. Another main goal is to explore potential value-added derivatives of biodiversity. This includes both tangible returns in the form of new discoveries in the biomedical and related sciences, as well as the less tangible goods such as the promotion of and an ecological aesthetic, and the corresponding benefits to the local communities, and to participating students and researchers.

Iquitos has a growing reputation as a tourist community, especially as a jumping-off point for tours of the Amazon rainforest and the , and trips downriver to , - the other rubber-industry city in the interior of the Amazon basin - and finally the , which is convert|3360|km|mi|0|abbr=on away.

A boat tour of Belén is a common tourist attraction. Belén is an area of Iquitos that can be accessed by foot in the dry season but is only accessible via boat in the wet season. Many of the homes in this area are tethered to large poles and float upon the rising waters every year, and some homes float year-round. Where the waters begin there are often a few men with their boats who transport locals and tourists for a small fee.

There is also an open-air market in Belén (in a part that doesn't flood). This too is a common tourist attraction. Most notable is the medicine lane, "Pasaje Paquito", an entire block of the market lined with local plant (and animal) medicines, stocking everything from to .

tourism has increased in Iquitos in recent years, with Westerners seeking traditional shamanic experiences using the visionary Amazonian medicinal tea. Although there are some reputable "curanderos" who can provide a safe context for such experiences, others do not have the specialised training or skills. As with any tourist activity, consumer discretion is advised.

Iquitos is served by .

Iquitos has two : , the local state university, and , a private institution. It is also home to the "Instituto de Investigaciones de la Amazonía Peruana" (IIAP), the Institute of Investigation of the Peruvian Amazon.

is an team based in Iquitos. In 2005 the city's association football community received the as a result of being one of the five host cities for the .