Interstate 95 is a major Interstate Highway, running along the East Coast of the United States from Florida to Maine. In South Carolina, I-95 runs approximately parallel to the Atlantic Ocean shore although about 50 miles (80 km) inland, from Hardeeville in the south to Dillon in the northeast.

The southern gateway to I-95 in South Carolina.

For the most part, the 198-mile (319 km) drive is fairly benign, passing through the pine forests, farmlands, and blackwater streams and swamps of the Coastal Plain. However, a few landmarks do exist to break up the monotony. Crossing from the south from Georgia just over the Savannah River bridge, motorists are greeted to an elaborate gateway into the state of South Carolina. The Juanita M. White Crosswalk also exists between Exits 18 and 21.[1] A flyover on twin high-spans over Lake Marion provides an unexpected scenic break in the center of the highway's length. Moving further north and out of the Palmetto State, the NC state line is prominently marked by the South Of The Border amusement complex at the US 301/501 exit. Local traffic parallel to the interstate uses US 301 from South Of The Border to Santee, US 15 from Santee to Walterboro, and a combination of US 17 and US 17A from Walterboro to the Georgia state line north of Savannah. In addition, Interstate 95 shares a number of concurrencies, or multiplexes, with 3 of these U.S. Routes at various stretches in South Carolina.

The old US 15-301 bridge runs along the west side of I-95 and is used for recreational purposes.

The Mark H. Coates Highway is a one-mile (1.6 km) portion of Interstate 95 located in Jasper County near Hardeeville and extends one-half mile on both sides of mile marker 7. In May 1997, the General Assembly of the State of South Carolina passed a resolution to designate this section of Interstate 95 in honor of Lance Corporal Mark Hunter Coates, who served as a trooper with the South Carolina Highway Patrol from 1987 until his death in 1992.[2] Coates, who was a native of Lexington County, South Carolina was fatally shot on mile marker 7 on November 20, 1992 during the course of a traffic stop.[3] 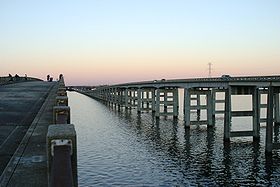 Like virtually all state spanning stretches of the United States Interstate Highways, I-95 in South Carolina was constructed in various stages, mainly from north-to-south, from 1965 to 1980, which includes the 1968-built Lake Marion Bridge.[4] The first traffic rolled along the highway from Dillon to Turbeville in 1968, finally able to cross the Savannah River south of Hardeeville by 1981.