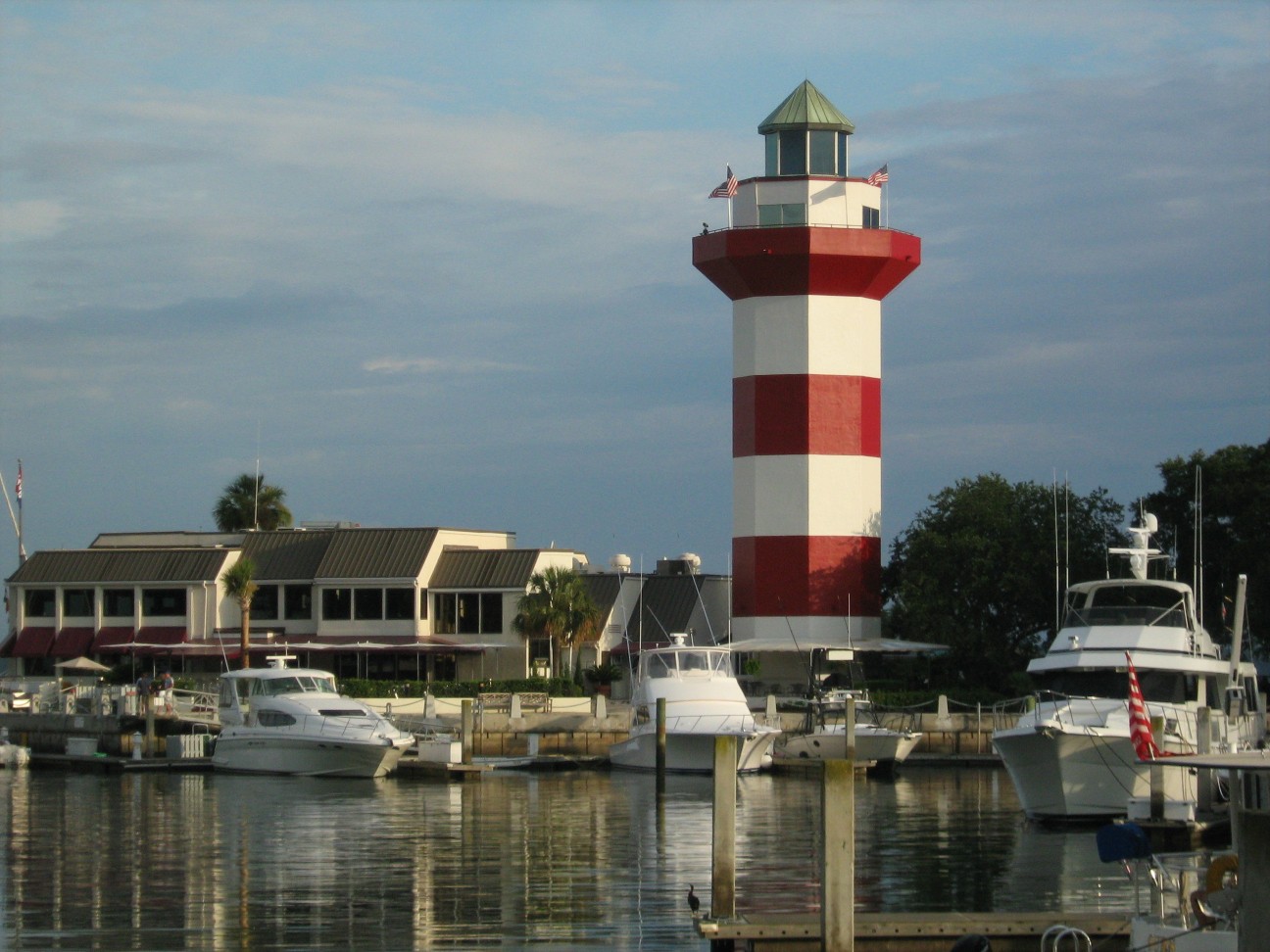 Hilton Head Island or Hilton Head is a town (located on an island of the same name) in Beaufort County, , United States. It is 20 miles (32 km) north of , and 95 miles (153 km) south of Charleston. The island features 12 miles (19 km) of beachfront on the and is a popular vacation destination. In 2004, an estimated 2.25 million visitors pumped more than $1.5 billion into the local economy. [ [http://www.hiltonheadisland.org/chamber-of-commerce/relocation/employment-and-volunteer.asp "Employment Fast Facts,"] "Hilton Head Island - Bluffton Chamber of Commerce" - Accessed January 31, 2007.] The year-round population was 33,862 at the 2000 census, although during the peak of summer vacation season the population can swell to 275,000.

The island has a rich history that started with seasonal occupation by native Americans thousands of years ago, and continued with European exploration and the Sea Island Cotton trade. It became an important base of operations for the Union blockade of the Southern ports during the Civil War. Once the island fell to Union troops, hundreds of ex-slaves flocked to Hilton Head, which is still home to many 'native islanders', many of whom are descendants of freed slaves known as the (or Geechee) who have managed to hold onto much of their ethnic and cultural identity.

The Town of Hilton Head Island incorporated as a municipality in 1983 and is well known for its "eco-friendly" development.

Hilton Head Island offers an unusual number of cultural opportunities for a community its size, including Broadway-quality plays at the Arts Center of Coastal Carolina, the 120 member full chorus of the Hilton Head Choral Society, the highly-rated Hilton Head Symphony Orchestra, the largest annual outdoor, tented wine tasting event on the east coast, and several other annual community festivals. It also hosts the , a stop on the which is played on the in .

An ancient Shell Ring can be seen near the east entrance to the Sea Pines Forest Preserve. The ring, one of only 20 in existence, is convert|150|ft|m|0 in diameter and is believed to be over 4,000 years old. Archeologists believe that the ring was a refuse heap, created by Native Americans that lived in the interior of the ring, which was kept clear and used as a common area. Two other Shell Rings on Hilton Head were destroyed when the shells were removed and used to make tabby for roads and buildings. The Shell Ring is listed in the and is protected by law. [ [http://www.csaadmin.com/shell_ring.htm "The Indian Shell Ring,"] "Community Services Associates (CSA)", Accessed May 18, 2007.]

Since the beginning of recorded history in the New World, the waters around Hilton Head Island have been known, occupied and fought for in turn by the English, Spanish, French, and Scots. [Carse R. (1981) "Hilton Head in the Civil War: Department of the South (20th Anniv. Ed.)", p. 1. Columbia, SC: The State Printing Company, ISBN B000J6GUMC]

In 1698, Hilton Head Island was granted as part of a barony to John Bayley of Ballingclough, County of Tipperary, Kingdom of Ireland. Another John Bayley, son of the first, appointed Alexander Trench as the Island's first retail agent. For a time, Hilton Head was known as Trench's Island. In 1729, Trench sold some land to John Gascoine which Gascoine named "John's Island" after himself. The land later came to be known as Jenkin's Island after another owner.

In 1788, a small Episcopal church called the Zion Chapel of Ease was constructed for plantation owners. The old cemetery, located near the corner of William Hilton Parkway and Mathews Drive (Folly Field), is all that remains. Charles Davant, a prominent island planter during the Revolutionary War, is buried there. He was shot by Captain Martinangel of Daufuskie Island in 1781. It is also home to oldest intact structure on Hilton Head Island, the Baynard Mausoleum, which was built in 1846.

William Elliott II of Myrtle Bank Plantation grew the first crop of in South Carolina on Hilton Head Island in 1790.

The Leamington Lighthouse was built in the 1870s on the southern edge of what is now Palmetto Dunes.

On August 27, 1893, the Sea Islands Hurricane made landfall near with a storm surge of convert|16|ft|m|0 and swept north across South Carolina, killing over a thousand and leaving tens of thousands homeless. [ [http://www.victoriana.com/Hurricane/seaislandshurricane-1.html "The Sea Islands Hurricane"] , "The Victorian Era Online", Accessed May 19, 2007.]

An experimental steam cannon guarding Port Royal Sound was built around 1900 in what is now Port Royal Plantation. The cannon was fixed but its propulsion system allowed for long range shots for the time.

On the Atlantic coast of the island are large concrete gun platforms that were built to defend against a possible invasion by the . Platforms like these can be found all along the eastern seaboard. Beach Patrol personnel to use horses and dogs to protect the southeastern coastline of the U.S. [ [http://www.uscg.mil/history/Beach_Patrol_Photo_Index.html Coast Guard Beach Patrol During World War II] , A Historic Photo Gallery, Accessed May 7, 2007.]

In the early 1950s, three lumber mills contributed to the logging of convert|19000|acre|km2|0 of the island. The island population was only 300 residents. Prior to 1956, access to Hilton Head was limited to private boats and a state-operated ferry. The island's economy centered on shipbuilding, cotton, lumbering, and fishing.

The James F. Byrnes Bridge was built in 1956. It was a two-lane toll swing bridge constructed at a cost of $1.5 million that opened the island to automobile traffic from the mainland. The swing bridge was hit by a barge in 1974 which shutdown all vehicle traffic to the island until the built and manned a pontoon bridge while the bridge was being repaired. The swing bridge was replaced by the current four-lane bridge in 1982.The beginning of Hilton Head as a resort started in 1956 with Charles Fraser developing , with the center piece being Harbour Town. Fraser was a committed environmentalist who changed the whole configuration of the marina at Harbour Town to save an ancient live oak. It came to be known as the Liberty Oak, known to generations of children who watched singer and song writer Gregg Russell perform under the tree for over 25 years. [ [http://www.parents.com/parents/story.jhtml?storyid=/templatedata/parents/story/data/6130.xml&categoryid=/templatedata/parents/category/data/1131554703863.xml&page=3 "Our Favorite Family Getaways"] , "Parents Magazine", June 2005. Accessed May 8, 2007] Fraser was buried next to the tree when he died in 2002. [ [http://www.lowcountrynow.com/stories/122202/LOCfuneral.shtml "Charles Fraser eulogized as great dreamer"] , "Carolina Morning News", December 22, 2002. Accessed May 8, 2007.]

The Heritage Golf Classic (now the ) was first played in in 1969, and has been a regular stop on the ever since.

Also in 1969, the Hilton Head Island Community Association successfully fought off the development of a chemical complex on the shores of Victoria Bluff (now Colleton River Plantation). Soon after, the Association and other concerned citizens "south of the Broad" fought the development of off-shore oil platforms by (a division of ) and ten-story tall liquefied natural gas shipping spheres by .

Office holders as of February 2008: