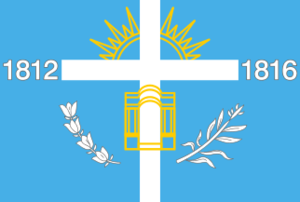 Tucumán is a province of , located in the northwest of the country. The capital is , often shortened to Tucumán. Neighboring provinces are from the north clockwise Salta, Santiago del Estero and Catamarca. It is nicknamed "El Jardín de la República" ("The Republic's Garden").

Before the Spanish colonization, this land was inhabited by the s and es, who practiced agriculture.

In 1533 Diego de Almagro explored the , including Tucumán. By 1565 saw the foundation of "San Miguel de Tucumán" by Diego de Villaroel, and the creation of the "Provincia de Tucumán, Juríes y Diaguitas", whose first governor was Francisco de Aguirre. San Miguel de Tucumán was refounded in 1685 by Miguel de Salas some 65 kilometres from its first location, in order to avoid the constant attacks of the aboriginal malones.

The local aborigines of the region presented a strong resistance to the Spanish, who decided to move the defeated tribes towards , being the most famous the case of the Quilmes, who were moved to the city of Quilmes.

Tucumán was a mid-point for shipments of gold and silver from the , with important cattle, textile, and wood activities that provided supplies for the convoys on their way to Buenos Aires. Because of its important geographical position, and as head of the civil and Catholic governments it acquired special importance during the 18th century.

The creation of the in 1776 meant the end of the convoys from to the port of Buenos Aires. Tucumán, with 20,000 inhabitants by that time, suffered also from the British imports from the newly opened customs of Buenos Aires, no longer under the monopoly of the Spanish Crown.

San Martín arrived to Tucumán in 1813 and installed the Military School. In 1814 the Intendency of Salta was divided into the present provinces.

On , at the "Congreso de Tucumán", the "Provincias Unidas del Río de la Plata" ("United Provinces of the Río de la Plata") declared their independence from , but internal conflicts delayed the final fusion of the provinces into the "República Argentina". Following the failure of Argentina's first independence-era government, the Directorate, Governor Bernabé Aráoz on March 22, 1820, proclaimed the creation of the "Federal Republic of Tucumán." The experiment collapsed, however, when the neighboring provinces of Catamarca and Santiago del Estero withdrew, the following year.

The beginning of the 20th century, with the customs restrictions and the arrival of the railway, brought prosperous economic times for the province and its production; but, the sugar price crisis of the 1960s led President to have eleven large state-owned sugar mills closed in 1966, hitting Tucumán's economy hard. [http://www.arztucuman.org.ar/pap/capitulo3_pap_1_2.htm Archdiocesis of Tucumán]

The next decade saw mounting unrest due partly to economic hardship and in 1975, Pres. declared a state of emergency in the province. The decree led to Operation Independence, an official military campaign at least as brutal on local magistrates, lawmakers and faculty as it was on its stated target, the ERP. Violence did not fully abate until the appointment of , the operation's commander, as governor at the behest of the dictatorship that deposed Mrs. Perón in 1976. Efficient as well as ruthless, Bussi oversaw the completion of several stalled public works; but, also presided over some of the worst human rights abuses during that painful 1976-77 period. [Andersen, Martin. "Dossier Secreto." Westview Press, 1993.] Retaining a sizable following, Bussi was elected governor in his own right in 1995, losing much of his popularity during his tenure.

Life in Tucuman has since returned to a certain normalcy and, if well its economy languished during much of the 1980s and '90s, it has recovered strongly during the expansive period Argentina has seen since 2002.

In spite of the small size of Tucumán, its necessary to distinguish two different geographical systems. The east is associated to the flat lands, while the west presents a mixture of the Sierras of the s to the south, and the canyons of the to the north, being the highest peak the "" with 5,550 meters.

Warm sub-tropical temperatures rein almost all over the province, but the mountain region receives more than 1,500 mm of precipitations per year, in contrast with the 600 mm of the plains. This is due to the effect of the mountains on the humid winds from the that elevate the wind to higher, and thus colder air, forcing the condensation of the humidity and later rain.

It is because of the abundant precipitations that Tucumán has a wide area of abundant vegetation that justifies the title of "Jardín de la República" ("Garden of the Republic").

The Salí is the main river of the province. There are a few dams in Tucumán used for hydroelectricity and irrigation; "El Cadillal" on Salí River, the most important of the province, "Embalse Río Hondo" and Hondo River, "La Angostura" on Río de los Sosa River, and "Escaba" on Marapa River. The are crossed by the Santa María River.

Long among the most underdeveloped Argentine provinces, Tucuman has been growing strongly and, in 2006, its economy measured US$7.2 billion, the nation's 7th largest. Its per capita output of US$5,400 is nearly 40% below the national average; but, it compares favourably with that of most of its neighbors. [ [http://www.iader.org.ar/ I.A.D.E.R ] ] Known internationally for its prodigious (with 2,300 km², and the sugar production, 60% of the country's), Tucuman's economy is quite diversified and agriculture accounts for about 7% of output. After the sugar crisis of the 1960s, Tucumán tried to diversify its crops, and now cultivates, among others, (world 1st. productor), , , , , , and s.

Cattle, sheep and goats are raised, mainly for local consumption.

Manufacturing is not prominent in Tucuman; but, still, adds about 15% to output. Besides the industrialisation of the sugarcane into sugar, paper and alcohol, there are food, textile and metallurgic industries. Among these latter, the freight-truck assembly operated by Swedish conglomerate 's SCANIA unit is probably the best-known. Mining is a minor activity, centred on salt, clay, lime and other non-metallic extractions.Cultural and sport tourism is common in the province and attracts a number of Argentine tourist every year.The (Route 9) crosses San Miguel de Tucumán and connects it with and Buenos Aires. The city also serves as a mid-stop for tourists visiting other provinces of the Argentine Northwest. The Benjamín Matienzo airport receives over half a million visitors per year.

the most visited destinations of the province are the , , , Quilmes' Ruins, the s' community of , and the city of .

There are 4 important universities in Tucumán the (with 60,000 students), the , and the

The province is divided into 17 departments (Spanish departamentos).