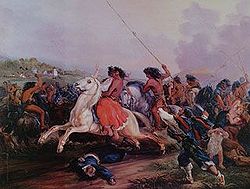 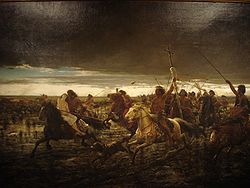 Malón or maloca was a military raiding tactic of the Mapuche peoples from the 17th to the 19th centuries.

The "maloca" among the Mapuche is described as a means of obtaining justice, by Juan Ignacio Molina:

"The injured family often assumes the right of pursuing the aggressor or his relations, and of punishing them. From this abuse are derived the denominations and distinctions, so much used in their jurisprudence, of genguerin, genguman, gerila, &c. denoting the principal connections of the aggressor, of the injured, or the deceased, who are supposed to be authorized, by the laws of nature, to support by force the rights of their relatives."

"When those who are at enmity have a considerable number of adherents, they mutually make incursions upon each others possessions, where they destroy or burn all that they cannot carry off. These private quarrels, called malocas, resemble much the feuds of the ancient Germans, and are very dreadful when the Ulmenes are concerned, in which case they become real civil wars. But it must be acknowledged that they are generally unaccompanied with the effusion of blood, and are confined to pillage alone. This people, notwithstanding their propensity to violence, rarely employ arms in their private quarrels, but decide them with the fist or with the club."[1]

As a tactic against the Spanish, the malón or maloca, pioneered by leaders such as Lientur, consisted of a fast surprise attack by a number of mounted Mapuche warriors against the white (huinca) populations, haciendas, settlements and fortifications in Chile and Argentina, with the aim of obtaining horses, cattle, provisions and captives, often young women. The effectiveness of the tactic was that a rapid attack without formal order did not give sufficient time to organize a defense, and that it left behind a devastated population unable to retaliate or pursue.

In Chile, the Spaniards responded with a system of fortifications, La Frontera, garrisoned by a standing army that patrolled the border along the Bio Bio River. In Argentina, where Mapuches in the 19th century ravaged the southern frontier, the government responded by building wooden outposts and occasionally fortresses, e.g. Fortaleza Protectora Argentina and the Zanja de Alsina, a trench that covered hundred of kilometers across the Pampas to make incursions more difficult. Ultimately, the Argentine government invaded and succeeded in conquering Mapuche territory in the Conquest of the Desert of the late 1870s.