The National Reorganization Process (Spanish: Proceso de Reorganización Nacional, often simply el Proceso, "the Process") was the name used by its leaders for the military government that ruled Argentina from 1976 to 1983. In Argentina it is often known simply as la última junta militar (the last military junta) or la última dictadura (the last dictatorship), because several of them existed throughout its history. 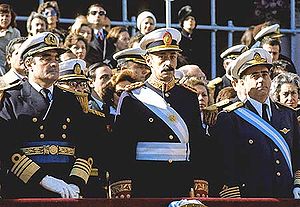 The Argentine military seized political power during the March 1976 coup, amid violent factional conflicts between supporters of recently deceased President Juan Domingo Perón. The junta continued the Dirty War. After losing the Falklands War to the United Kingdom in 1982, mounting public opposition to the junta led to its relinquishing power in 1983.

The military has always been highly influential in Argentine politics, and Argentine history is laced with frequent and prolonged intervals of military rule. The popular Argentine leader, Juan Domingo Perón, three times President of Argentina, was himself a colonel in the army who initially came to hold political power in the aftermath of a 1943 military coup. He advocated a new policy dubbed Justicialism, a nationalist policy which he claimed was a "third way," an alternative to both capitalism and communism. After being re-elected to the office of president by popular vote, Perón was deposed and exiled by Revolución Libertadora in 1955.

After a series of weak governments, and a seven year military government, Perón returned to Argentina, following 20 years exile in Franquist Spain, amidst escalating political unrest, divisions in the Peronist movement and outbreaks of politically motivated violence. His return was marked by the June 20, 1973 Ezeiza massacre during which the right-wing Peronist movement became predominant.

Peron was democratically elected President in 1973, but died in July 1974. His vice-president was his third wife, Isabel Martínez de Perón, but she proved to be a weak, ineffectual ruler. A number of revolutionary organizations — chief among them Montoneros, a group of far-left Peronists — escalated their campaign of political violence (including kidnappings and bombings) against the campaign of harsh repressive and retaliative measures enforced by the military, the police, and right-wing paramilitary groups such as the Triple A death squad, founded by José López Rega, Peron's Minister of Social Welfare and a member of P2 masonic lodge. The situation escalated until Martínez was overthrown and replaced by a military junta led by Lieutenant General Jorge Rafael Videla, on 24 March 1976.

The expression "national reorganization process" was used to imply orderliness and control of the critical sociopolitical situation of Argentina at the time. Forced disappearances on ideological grounds and illegal arrests, often based on unsubstantiated accusations, became common. Armed soldiers arrived at randomly selected people's houses to rob them.[citation needed] The police would pull over cars for no reason, beat the occupants senseless, and leave without explanation, as part of a program to intimidate the populace and decrease its willingness to protest against the government.[citation needed] Government spies were dispatched to infiltrate the universities; students who openly professed even slightly leftist political opinions would simply disappear.[citation needed] Official investigations undertaken after the end of the Dirty War documented the "disappearance" of about nine thousand persons, noting nevertheless that the correct number is bound to be higher, since many cases were not reported and the records were destroyed by the military authority [3]; unofficial estimates by most human rights organizations place the number closer at 30,000. Among the "disappeared" were pregnant mothers whose babies, once born, were then illegally adopted by military families. The film The Official Story which won the Oscar for the Best Foreign Film category in 1985, addresses this situation. The Argentine secret service SIDE (Secretaría de Inteligencia del Estado) also cooperated with the DINA and other South American intelligence agencies in what was known as Operation Condor. It would also train the Nicaraguan Contras, for example in Lepaterique's base (Honduras).

The regime shut down the legislative branch and restricted both freedom of the press and freedom of speech, adopting severe media censorship. The 1978 World Cup, which Argentina hosted and won, was used as a means of propaganda and to rally its people under a nationalistic pretense.[citation needed]

Corruption, a failing economy, growing public awareness of the harsh repressive measures taken by the regime, and the military defeat in the Falklands War to the United Kingdom in 1982, eroded the public image of the regime. The last de facto president, Reynaldo Bignone, was forced to call for elections by the lack of support within the Army itself and the steadily growing pressure of public opinion. On 30 October 1983 elections were held, and democracy was formally restored on December 10 with the assumption of President Raúl Alfonsín.

Videla appointed José Alfredo Martínez de Hoz as Minister of Economy, charged with stabilizing it and privatizing state-owned companies, along what would later be known as neoliberal lines. He was opposed by General Ramon Díaz, the Minister of Planning, who favored a corporatist model[citation needed], with the state retaining control of key industries. Although Díaz resigned, military officers, many of whom looked forward to jobs running state enterprises, blocked Martínez de Hoz's privatization efforts. Meanwhile, the Junta borrowed money abroad for public works and social welfare spending. Martínez de Hoz was forced to rely on high interest rates and an over-valued exchange rate to control inflation, which hurt Argentine industry and exports.

French journalist Marie-Monique Robin has found in the archives of the French Ministry of Foreign Affairs, the original document proving that a 1959 agreement between Paris and Buenos Aires instaured a ‘permanent French military mission,’ formed of soldiers who had fought in the Algerian War, and which was located in the offices of the chief of staff of the Argentine Army. She showed how Valéry Giscard d'Estaing's government secretly collaborated with Videla's junta in Argentina and with Augusto Pinochet's regime in Chile.[1]

Green deputies Noël Mamère, Martine Billard and Yves Cochet deposed on September 10, 2003 a request for the constitution of a Parliamentary Commission on the "role of France in the support of military regimes in Latin America from 1973 to 1984" before the Foreign Affairs Commission of the National Assembly, presided by Edouard Balladur. Apart from Le Monde, newspapers remained silent about this request [2]. However, deputy Roland Blum, in charge of the Commission, refused to hear Marie-Monique Robin, and published in December 2003 a 12 pages report qualified by Robin as the summum of bad faith. It claimed that no agreement had been signed, despite the agreement found by Robin in the Ministry.[3][4]

When Minister of Foreign Affairs Dominique de Villepin traveled to Chile in February 2004, he claimed that no cooperation between France and the military regimes had occurred.[5]

Attitude of the United States Government

Declassified cables from the National Security Archive reveal the attitude of the US government toward the Dirty War, particularly that of Secretary of State Henry Kissinger.[6] Kissinger was quoted as telling the Junta:

Look, our basic attitude is that we would like you to succeed. I have an old-fashioned view that friends ought to be supported. What is not understood in the United States is that you have a civil war. We read about human rights problems but not the context. The quicker you succeed the better… The human rights problem is a growing one. Your Ambassador can apprise you. We want a stable situation. We won't cause you unnecessary difficulties. If you can finish before Congress gets back, the better. Whatever freedoms you could restore would help.

There were attempts by Spanish judge Baltasar Garzón to call former United States Secretary of State Henry Kissinger as a witness in the investigations into the disappearances,[7] as well as unsuccessful attempts at arrest warrants in the United Kingdom.[8]

Following a decree of President Alfonsín mandating the initiation of legal accusations and trial against the leaders of the Proceso, they were judged and convicted in 1985 (Juicio a las Juntas), but they were pardoned by President Carlos Menem in 1989, a highly controversial action. Amnesty laws were declared unconstitutional by the supreme court in 2005, allowing the trials against military officers to be resumed.[9]

Adolfo Scilingo, an Argentine naval officer during the junta, was tried for his role in jettisoning the drugged, naked bodies of political dissidents from military aircraft into the Atlantic Ocean during the junta years. He was convicted of crimes against humanity and sentenced to 640 years in prison in Spain in 2005.

Cristian Von Wernich, a Catholic priest and former chaplain of the Buenos Aires Province Police, was arrested in 2003 on accusations of torture of political prisoners in illegal detention centers, for which an Argentine court sentenced him to life in prison on October 9, 2007.

In 2002 the Argentine Congress declared the date of March 24 the Day of Remembrance for Truth and Justice, in commemoration for the victims of the dictatorship. In 2006, thirty years after the coup d'état that started the Proceso, the Day of Memory was declared a national public holiday. The anniversary of the coup was remembered by massive official events and demonstrations throughout the country.