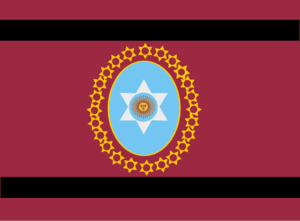 Salta is a province of , located in the northwest of the country. Neighboring provinces are from the east clockwise Formosa, Chaco, Santiago del Estero, Tucumán and Catamarca. It also surrounds Jujuy. To the north it borders and and to the west lies .

Before the arrival of the Spanish conquest, numerous native inhabitants currently referred to as s and es lived in the valleys of the Salta Province. These included many different tribes, such as the Quilmes and Humahuacas, all of which shared the language. The Atacamas in the Puna, and the s (Matacos) near the .

The first conquistador to adventure to the area was in , followed by Diego de Rojas. In "San Felipe de Lerma" was founded by after orders of viceroy , but the name of he city was soon changed to "San Felipe de Salta" In 1650 the city had around 500 inhabitants.Within the is created the intendency of "Salta del Tucumán". In 1774 "San Ramón de La Nueva Orán" is founded as a between and , the later added to the intendency in 1807. In , due to the importance of the city, the capital of the intendency of "Salta del Tucumán" is moved from to Salta. After the in 1813 the territory was freed form , but occasional attacks were still driven from the until . Gervasio de Posadas creates in the Salta Province, covering the current provinces of Salta, Jujuy, part of the South of and the North of the .

Due to some internal conflicts after the Argentine independence, Bolivia annexed Tarija in . In 1834 Jujuy separates from Salta and becomes a province of its own. In 1900 Salta loses to Bolivia.

The National Government of Los Andes, constituted in 1902, and its capital became once again part of the Salta Province in as Los Andes Department and San Antonio de Los Cobres as its capital city.

To the West, the Puna's arid high plains with salty lakes (Arizaro, Pocitos) has few inhabitants, and its main city is .

High snowy Andean peaks (Acay, Cachi and Chañi) lower to the North-east and hold valleys such as "Quebrada del Toro", and the Lerma Valley. This is the most densely inhabited area, and where the city is found. The climate of the area is of hot summers (average of 23 °C with peaks of 40 °C) and cold winters with temperatures well below freezing point.

To the east, near the area, the more humid subtropical climate is home to the jungle in the .

The main rivers of the province are the Pilcomayo, Bermejo and the Juramento, which later becomes the Salado River. Salta Province is located at a geologically active region, and suffers from occasional s. Fairly destructive were the ones that occurred in and .

Agriculture and its derived industries are still an imporant activity in the province, adding over 10% to output. , and are the most important and produce most of the exports from the area. Other crops mostly for local consumption are , s, , s, and es. The sugar cane is processed in plants in Salta before it is sent to the rest of Argentina and other countries. The plant in "San Martín de Tabacal" is the most important of them. The famous wines of the region near are produced in numerous s of diverse sizes (mainly , and ).

Gas and petroleum from the "Tartagal", "Aguas Blancas", "Madrejones" and "Campo Durán" centres is transported to and by pipes. "Campo Durán" also has an oil refinery located in the province. In all, manufacturing plays a significant role in Salta, adding 20% to the economy. Mining includes extraction at the "La Casualidad" mine, and at "Iruya", "La Poma" and "San Carlos".

American breeds of are raised only on the humid sub-tropical east, along with some and s.

The Salta Province is home to a number of natural, social and historic attractions.

The city of "La Linda" ("The beautiful") is both an important tourist destination, and the centre point for visiting the rest of the province. The city holds different attractions; among them are her colonial houses and cathedral, and the "Museo de Arqueología de Alta Montaña de Salta" that holds the 3 frozen Inca mummies found at the 6,700 meters of the volcano.

Also from Salta, the crosses canyons and cliffs before arriving to the 3,775 metres (12,500 feet) of . The red-rock formations of the and the wine-town of are the second most visited place in the province. Many visit the mountain and the villages (such as "Payogasta") around it.

There are 3 national parks in Salta: in the jungle, and .

The province is divided in 23 departments ( _es. departamentos).Department (Capital)