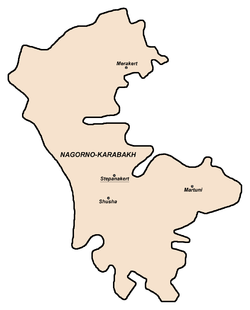 The Nagorno-Karabakh Autonomous Oblast was an autonomous oblast within the borders of the Azerbaijan SSR, mostly inhabited by ethnic Armenians and created on July 7, 1923. According to Karl R. DeRouen it was created as an enclave so that a narrow strip of land would separate it from Armenia proper.[1] According to Audrey L. Altstadt the oblast's borders were drawn to include Armenian villages and to exclude as much as possible Azerbaijani villages. The resulting district ensured an Armenian majority.[2]