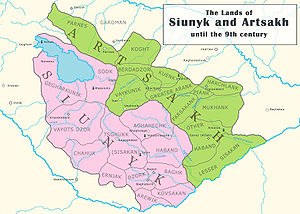 Artsakh (Armenian: Արցախ, Armenian pronunciation: [ɑɾˈtsʰɑχ], Arc’ax) was the tenth province (nahang) of the Kingdom of Armenia from 189 BC until 387 AD and afterwards a region of Caucasian Albania from 387 to the 7th century. From the 7th to 9th centuries, it fell under Arab control.[1] In 821, it formed the Armenian principality of Khachen and in around 1000 was proclaimed the Kingdom of Artsakh, which was one of the last medieval eastern Armenian kingdoms and principalities to maintain its autonomy following the Turkic invasions of the 11th to 14th centuries.[2]

According to Armenian historians, inscriptions dating to the Urartian period mention the region under a variety of names: "Ardakh", "Urdekhe", and "Atakhuni."[3] In speaking about Armenia in his Geography, the classical historian Strabo refers to an Armenian region which he calls "Orchistene.", which again is believed by Armenian scholars to be the old name of Artsakh [4]

According to another supposition of David M. Lang, the ancient name of Artsakh probably recalls the name of King Artaxias I of Armenia (190-159 BC), founder of the Artaxiad Dynasty and the kingdom of Greater Armenia.[5]

Folk etymology has that the name is derived from "Ar" (Aran) and "tsakh" (woods, garden) (i.e., the gardens of Aran Sisakean, the first nakharar of northeastern Armenia).[6]

The name today is used mostly by Armenians to refer to Nagorno-Karabakh.

Artsakh covered the north-eastern range of the Armenian Plateau[7] and was mostly mountainous and afforested.[8] In medieval Armenian sources it is styled as a strategic and fortified region.[9][10] It was bounded by the following Armenian principalities: Utik to the east, Gardman to the northeast, and Syunik to the southwest.[11] The river Arax formed the southern boundary. The Kingdom of Artsakh (1000–1261) also included Gardman, Sodk and some other parts of Gegharkunik (in particular the southeastern shore of the Sevan Lake).[12] Its area is estimated to have been 11,528 km2.[13]

Important places (mostly fortified towns) included Parisos, Tigranakert, Sodk, Tsar, Vaykunik, Asteghblur, Goroz and Berdaglukh. The fortress of Tigranakert, which was first excavated in 2005, is believed to be founded by King Tigranes the Great of Armenia in the 1st century BC, although conceivably it could also be founded by King Tigranes I (123-55 BC).[14] Later, in the Albanian period, the village of Guetakan (Armenian: Գյուտական, known as the "Royal Village") became of great importance as the residence of Vachagan III the Pious (467-510 AD), the last King of Caucasian Albania. By early medieval times, the castle of Khachen served a considerable time as the center of Artsakh.

It is not certain how Artsakh was administrated as a province of Armenia. According to some Armenian scholars, Artsakh formed a principality with the adjacent canton of Sodk, however this is not certain. Conceivably it was royal land. Its northern part also comprised the principality of Koght and it is possible that the princes of Koght were the original owners of Artsakh.[15] Under Albanian rule Artsakh, while often referred to, was not a recognized political entity. By the 9th century it comprised a number of small political units, including the principalities of Khachen in the center and Dizak in the south. Only in the 13th century these two states merged into one - the Kingdom of Artsakh.[2] 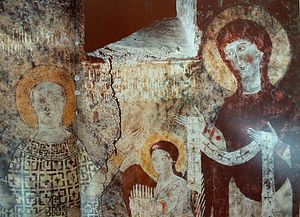 Fragment of a fresco with Armenian inscribed text in Dadivank Monastery, shows a masterpiece of medieval culture of Artsakh.

Following the modern consensus among western scholars concerning the origin of the Armenian people, the latter represent a fusion of the mostly non-Indo-European natives of the Armenian Plateau (including Artsakh) and the incoming proto-Armenians, conventionally called the "Armens", who moved eastwards through the Armenian Plateau after the collapse of Urartu in the 6th century BC.[16][17] According to this theory, from earliest time the Armenian Plateau was inhabited by many ethnic entities. The ethnic character of Artsakh may thus have been originally more varied and probably it was home of the ancient tribes who lived in the region of Arran, although that is not certain.[17][18]

According to the Encyclopædia Iranica, the proto-Armenians have settled in Artsakh already in the 7th century BC, though until the 6th-5th centuries BC the Armenians in the strict sense must have lived only on the western half of the Armenian Plateau (in areas between Cappadocia, the Tigris, the Euphrates, and the lake of Van).[19] The proto-Armenians came to Artsakh and adjacent mountainous regions (such as Syunik) somewhat later than the central parts of the Armenian Plateau and intermarried with its pre-Armenian natives to form its present Armenian people.[16]

Noteworthy, Strabo described Armenia (Artsakh and Utik included) in the 2nd century BC as "monolingual",[4] though this does not mean that its population consisted exclusively of ethnic Armenians.[20]

By medieval times, from at least the 9th century, the population of Artsakh had a strong Armenian national identity.[18] Its people spoke a local Eastern Armenian dialect, the Artsakhian dialect (today known as the Karabakh dialect), which is mentioned by 7th century grammarian Stepanos Syunetsi in his earliest record of the Armenian dialects[15]

Archaeological evidence reflects the competing influence from around 800 BC of the neighboring rival states Urartu, Assyria, and Mannai. After the fall of Urartu (sixth c. BC), most of the region south of the Kura, came under the domination of the Medes and Achaemenian Persians.[citation needed].

In 189 BC, when the Kingdom of Armenia was established, Artsakh became part of the new Armenian state. Strabo reports that King Artaxias I of Armenia (189BC-159BC) expanded his state in all directions at the expense of his neighbors[citation needed]. At this time, he conquered from Medes the lands of Caspiane and "Phaunitis" (supposedly a copyist error for Saunities, i.e. Siwnik), Utik and possibly the unnamed land of Artsakh, laying between Caspiane and Siwnik.[2][17] However it is just possible that Artsakh has earlier been part of Orontid Armenia in the 4th-2nd centuries BC rather than under Median rule.[2]

Map of Orontid Armenia, 4th-2nd centuries BC (the inclusion of Artsakh and Utik is uncertain.)

According to a traditional Armenian view, based on the accounts of early medieval Armenian historiographers Movses Khorenatsi and Movses Kaghankatvatsi, Artsakh was the original dominion of a certain Aran who was the progenitor of the House of Aranshahik - "the ancient native Armenian family".[21] Aran was called "the Aghu" (meaning amiable in Armenian[22]) because his good manners.[23] The genealogy of Aran (old spelling: Eran, hence: Eranshahik) is preserved by the historiographer Movses Kaghankatvatsi, who wrote that Aran belonged to the lineage of the ancient patriarchs and kings of Armenia, including Hayk, Aramaneak, Aramayis, Gegham, Aram, Ara the Beautiful, Haykak, Norayr, Hrant, Perch, Skayordi, Paruyr, Hrachea, Ervand (Orontes) Sakavakeats, Tigranes et al.[21]

Aran was appointed by the King Valarsace of Armenia as hereditary prince (nahapet or genearch) over the plain of Arran until the fortress of Hnarakert.[24] Aran is also known as the divine eponym[25] and the first governor of the Caucasian Albanians, appointed by Vagharshak I the Parthian.[21]

In 301 Armenia was converted to Christianity. The Armenian historian Agathangelos mentioned the princes of Utik and Sawdk (which probably comprised Artsakh) among the sixteen Armenian princes, who escorted Grigor the Illuminator to Caesarea, where he would be enthroned the High Priest of their land.[26]

Artsakh became a major stronghold for Armenian missionaries to spread the Christianity in the neighboring countries. In 310 St Grigoris, the grandson of Grigor the Illuminator, was ordained bishop of Caucasian Iberia and Caucasian Albania in the monastery of Amaras, being just 15 years old.[27] After his martyrdom by the Mazkutian king on the field of Vatnean (near Derbent), his disciples conveyed his body back to Artsakh and buried him in Amaras, which has been built by Grigor the Illuminator and Grigoris himself. Hence St Grigoris became a patron saint of Artsakh. The historiographer Pavstos Buzand wrote that "... every year the people of that places and cantons gathers there [in Amaras] for the festive commemoration of his valor".[28]

In the 5th century, Christian culture flourished in Artsakh. In around 410 Mesrop Mashtots opened at Amaras the first Armenian school.[29] Later, more schools were opened in Artsakh.[30]

The second half of the 4th century saw a series of wars between the Kingdom of Armenia and Persian Empire. After it lasted 34 years, the Armenian nobility of Artsakh and most of other provinces of Armenia revolted and refusing to support the Armenian king Arshak II anymore because of war-weariness.[10][31] Following the defeat of the Sassanid and Albanian armies, the Armenian strategist (sparapet) Mushegh Mamikonian punished severely the rebelled Armenian provinces, among others Artsakh, and subjected them to the king's rule. Then in 372 he attacked Caucasian Albanians and took back from them the neighboring province of Utik and made the river Kur the border between Armenia and Albania as it has been earlier.[10] 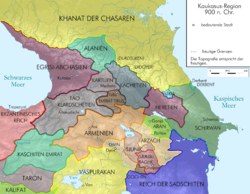 Political map of the Caucasus c. 900.

However, war between the Sassanid Persians and Romans continued, and in 387 AD, according to the peace treaty between the two powers, the Armenian kingdom was partitioned between them. Albania, as an ally of the Sassanids, gained all the right bank of the river Kura up to the Araxes, including Artsakh and Utik.[32]

Following the inconclusive Battle of Avarayr (451), where the Christian Armenian army clashed with the Sassanid army, many of the Armenian nobles retreated to impassable mountains and forests in several provinces, including Artsakh, which became a center for resistance against Sassanid Iran.[33] From 5th to 7th centuries Artsakh was ruled by Armenian noble family of Arranshahiks. Furthermore, the Armenian rulers of Artsakh began to play a considerable role in the affairs of Albania.[34] In 498 in the settlement named Aghuen (in present-day Mardakert region of Nagorno-Karabakh[35]), an Albanian church assembly was held, in the presence of the nobility and princes ("azgapetk") of Artsakh and the king Vachagan the Pious, to adopt the Constitution of Aghven, which would arrange relations between the of nobility (landlords), clergy and village people.[36]

In the 7th-9th centuries, the Southern Caucasus was dominated by the Arabian Caliphate. In the early 9th century two Armenian princes - Sahl Smbatian and Esayi Abu-Muse - who revolted against the Arab rule and established two independent principalities in Artsakh – Khachen and Dizak. At the time the Byzantine emperor Konstantinos Porphyrogennetos addressed letters "to prince of Khachen - to Armenia", being the residence of the Armenian prince Sahl Smbatian. The House of Khachen ruled Artsakh until the early 19th century, when it was conquered by Imperial Russia.[2] It was then often referred to the Land of Khachen (later Karabakh).