The Nagorno-Karabakh Republic Defense Army (Armenian: Լեռնային Ղարաբաղի Հանրապետության ինքնապաշտպանության բանակ, Lerrnayin Gharabaghi Hanrapetut’yan ink’napashtpanut’yan banak) is the formal defense force of the unrecognized but de-facto independent Nagorno-Karabakh Republic (NKR). Established in 1992, it united previously disorganized self-defense units which were formed in the early 1990s with the avowed goal of protecting the ethnic Armenian population of Nagorno-Karabakh from the attacks by the Soviet and Azerbaijani armed forces.[2] The Nagorno-Karabakh Defense Army is currently composed of around 20,000 well-trained and -equipped officers and soldiers and maintains a "constant state of readiness, undergoing more serious combat training and operational exercises than any other former Soviet army."[3]

The Nagorno-Karabakh Defense Army was founded on May 9, 1992. It created "its own central command and military structure distinct from the Armenian Army."[4] Its founders included Robert Kocharyan (the former president of Armenia, he was the first commander in chief of the Army);[5] Serzh Sargsyan (current president of Armenia); Vazgen Sargsyan (Armenia's Defense Minister 1992-93, State Minister in Charge of defence 1993-95, Armenia's Prime-Minister 1998-99);[5] Monte Melkonian (responsible for Martuni region);[6] Samvel Babayan (Nagorno Karabakh's Defence Minister from 1994 to 2000) and others.[5] Many of the men who served in its ranks and in the officer corps during the Nagorno-Karabakh War were seasoned veterans of the Soviet military and had fought with distinction in the Soviet war in Afghanistan.[3]

The formal formation of the NKR Defense Army was rooted in the concept of the Jokat (volunteer detachment).[6] With the early outbreak of hostilities prior to 1992, Armenians of Nagorno-Karabakh began forming small detachments of volunteers, often self-described as Fedayeen, inheriting the name of the fighters who actively resisted the Ottoman Empire in the final decades of the nineteenth and early decades of the twentieth centuries.

At the outset these detachments were small groups of no more than 12-40 men. For example, during Operation Ring, Shahumyan was defended by a force as small as 22 men under the command of Tatul Krpeyan. These volunteer militia would initially arm themselves with whatever was available, including hunting shotguns borrowed from local farmers and even home-made rifles. In the later stages of the war, these units armed themselves with AK-47s, RPGs and sometimes portable anti-aircraft MANPADs, transforming the defense force into a highly mobile and flexible force that was capable of waging guerilla warfare. Likewise, these units initially had no heavy military equipment, but later started taking over large quantities of Azerbaijani tanks and armored personnel carriers that were abandoned on the battlefield. Most of these captured tanks and APCs later became part of the NKR Defense Army's equipment. Improvisation, multi-functionality, creativity, strong-morale, focus on defensive tactics, adaptation, flexibility, high-mobility and a native knowledge of the mountainous terrain are all important factors in understanding the combat success of these small units.

The initial purpose of these detachments, made up of volunteers, was mainly to defend Armenian civilian population, each in a particular village or town. Each of them was operating independently with no central command or leadership. Yet, these units would regularly collaborate in joint operations such as the battle of Khojaly in February 1992 or the June 1992 surprise counter-offensives against operation Goranboy. The increasing scale and intensity of Azeri attacks, the devastation caused by the bombardments emanating from Grad multiple rocket launchers in Shushi and the Lachin, the blockade from mainland Armenia had broadened the notion of security beyond the mere defense of a small village. Capturing Shushi and Lachin as well as turning the tide of operation Goranboy became, for the Armenians, not only a matter of security, but that of survival.[7] For the successful conduct of such large-scale operations, the detachments had to be consolidated under a single command of the unified NKR Defense Army. 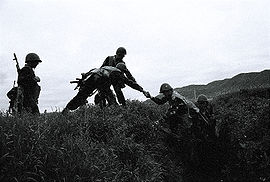 Troops from the 8th Regiment climb out of a trench during military exercises on the Agdam front.

The Nagorno-Karabakh Defense Army's primary role after the conclusion of the Nagorno-Karabakh War in 1994 is the protection of the NKR from foreign and domestic threats. Though the war ended with the signing of a cease fire between Armenia and Azerbaijan and the de facto independence of the NKR, the Azerbaijani leadership has repeatedly threatened to restart hostilities to retake the region.[8] Violations of the cease fire along the line of contact are frequent and often result in the deaths of several soldiers and civilians each year. The most significant breach of the ceasefire occurred in Mardakert on March 8, 2008, when up to sixteen soldiers were killed. Both sides accused the other of starting the battle.[9]

In June 2010, new skirmishes broke out between Armenian and Azerbaijani troops along the line of contact, resulting in the deaths of four Armenian servicemen.[10]

As for infantry weapon most rely on the AK-74 rifle and older AKMs in reserve for standard issue rifles. While other basic weapons consists of Makarov PM pistols PK Machine Guns and RPG-7 rocket launchers mostly supplied by Armenia. The Nagorno-Karabakh military is deeply integrated with the Armenian military, and the NKR depends on the Armenian Army to ensure its survival as an independent national entity. Armenia considers any act of aggression against Karabakh as an act of aggression against itself.[3]

The Nagorno-Karabakh Defense Army maintains a small air-force with a personnel of around 250 men.[1]