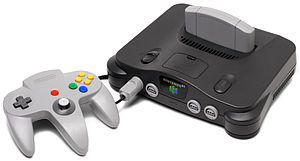 Nintendo 64 cartridges. From left to right; Super Mario 64 (the system's best selling game), the reverse of a USA/Canada, a PAL region, and a Japanese region game, (note the identical tabs near its bottom edge).

The Nintendo 64 video game console has a library of games, which were released in plastic ROM cartridges. Two small indents on the back of the carts allow it to connect or pass through the system's cartridge dustcover flaps.[1] All regions have the same connectors, and a cartridge converter or simply removing the casing from these will allow them to fit into the other regions systems,[2] however the systems are also equipped with lockout chips that will only allow them to play their appropriate games. Both Japanese and North American systems have the same NTSC lockout, while Europe has a PAL lockout. A bypass device such as the N64 Passport or the Datel Action Replay can be used to play import titles, but a few games require an additional boot code before they can be played.[3]

Of the console's 387 official releases, 84 were exclusive to Japan, 47 to North America, and 4 to Europe. The Nintendo 64 was first launched in Japan on June 23, 1996 with Super Mario 64, Pilotwings 64, and Saikyo Habu Shogi; in North America with Super Mario 64 and Pilotwings 64; and in Europe with Super Mario 64, Pilotwings 64, Star Wars: Shadows of the Empire and Turok: Dinosaur Hunter. The last game to be published for the system was the North American-exclusive Tony Hawk's Pro Skater 3 on August 20, 2002. The best-selling game is Super Mario 64 with 11 million units (as of May 21, 2003).[4] Despite the higher cost of producing cartridges, and continued criticism[5][6] over releasing a cartridge-based system,[7][8] the total sales of the Nintendo 64 software out sold the total amount of Nintendo GameCube software.[9]

This list does not include games for the disk drive add-on (for those see Nintendo 64DD). The list is initially organized alphabetically by their English titles or their alphabet conversions, however it is also possible to sort each column individually. It is arranged with the different titles being listed once for each program that it contains; the various titles are listed by the majority name first. When two English regions released a game with different names the first version is listed first. All English titles are listed first, with an alternate title listed afterward; direct translations of English titles are not used.