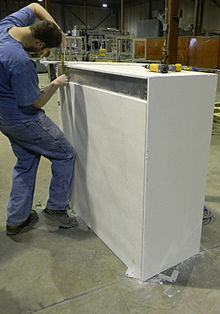 Calcium silicate passive fire protection board being clad around steel structure in order to achieve a fire-resistance rating.

Calcium silicate (often referred to by its shortened trade name Cal-Sil or Calsil) is the chemical compound Ca2SiO4, also known as calcium orthosilicate and sometimes formulated 2CaO.SiO2. It is one of group of compounds obtained by reacting calcium oxide and silica in various ratios[1] e.g. 3CaO.SiO2, Ca3SiO5; 2CaO.SiO2, Ca2SiO4; 3CaO.2SiO2, Ca3Si2O7 and CaO.SiO2, CaSiO3. Calcium orthosilicate is a white powder with a low bulk density and high physical water absorption. It is used as an anti-caking agent and an antacid. A white free-flowing powder derived from limestone and diatomaceous earth, calcium silicate has no known adverse effects to health[citation needed]. It is used in roads, insulation, bricks, roof tiles, table salt[2] and occurs in cements, where it is known as belite (or in cement chemist notation C2S). 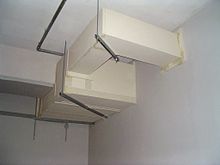 Circuit integrity fireproofing of cable trays in Lingen/Ems, Germany using calcium silicate board system qualified to DIN 4102. Other methods for exterior protection of electrical circuits include boards made of sodium silicate bonded and pressed vermiculite and flexible wraps made of ceramic fibre and rockwool.

Calcium silicate is also a constituent of the slag that is produced when molten iron is made from iron ore and calcium carbonate in a blast furnace. When this material is processed into a highly refined, repurposed calcium silicate aggregate, it is used in the remediation of acid mine drainage (AMD) on active and passive mine sites.[3] Calcium silicate neutralizes active acidity in AMD systems by removing free hydrogen ions from the bulk solution, thereby increasing pH. As its silicate anion captures H+ ions (raising the pH), it forms monosilicic acid (H4SiO4), a neutral solute. Monosilicic acid remains in the bulk solution to play other important roles in correcting the adverse effects of acidic conditions. As opposed to limestone (a popular remediation material),[4] calcium silicate effectively precipitates heavy metals and does not armor over, prolonging its effectiveness in AMD systems.[3][5]

As a product of sealants

When sodium silicate is applied as a sealant to cured concrete or the shells of fresh eggs, it chemically reacts with calcium hydroxide or carbonate to form calcium silicate hydrate, sealing pores with a relatively impermeable material.