Shortland Street
This article is about the New Zealand soap opera. For the fictional hospital in which the series is based, see Shortland Street Hospital.

Shortland Street is a New Zealand prime-time soap opera, first broadcast on Television New Zealand's TV2 on 25 May 1992. It is the country's longest-running drama and soap opera, being broadcast continuously for over 4500 episodes and 19 years, and is one of the most watched television programs in New Zealand. The show centres around the domestic and professional lives of the people who work at Shortland Street Hospital, a modern combined public-private hospital based in the fictional suburb of Ferndale, Auckland.

The show was originally screened as five half-hour episodes each week and initially receiving mixed reviews on its premiere.[1] After its launch it dropped in ratings and would have been cancelled if TVNZ had not ordered a year's worth of episodes in advance. By early 1993, the show's rating picked up and TVNZ renewed the production. Today, it is one of New Zealand's highest-rated shows - frequently making AGB Nielsen Media Research's top 5 programmes of the week.

As at 2011 the series continues to screen as five half-hour episodes each week, with Monday episodes in the winter months now being extended to one-hour duration. An omnibus edition is screened on Sunday mornings.

Other locations include The IV, a bar and restaurant located opposite the hospital; Sugar, a café located somewhere in Ferndale; and Ferndale High School, the local state secondary school.

The exterior views of the houses featured on the programme are located around the North Shore, West Auckland and Auckland City - the interiors are filmed on a sound stage in the Waitakere Studios.

Shortland Street's working title was The Shortland Street Project after its planned filming location in a TVNZ-owned studio at 74 Shortland Street in Auckland Central. However, the studio was found to be too small for the required sets, and the production studio was moved to a warehouse in Browns Bay. After running through many name options, the original working title was chosen and subsequently truncated to simply Shortland Street.[2] The name subsequently is a homage to the Shortland Street studios, which were home to New Zealand's first regular television broadcast in 1960, and were home to TVNZ and its predecessors Auckland operations until TVNZ moved to its new purpose-built television centre on Victoria Street West in 1990. The building has subsequently been sold to the University of Auckland and now forms their Gus Fisher Gallery.

The concept and format of the show was developed largely by New Zealand writer Ken Catran working with Fremantle Pictures. His scripts established the characters, setting and tone of the series. His first episode became infamous for having a sex scene between Doctor Chris Warner and an aerobics instructor, Jill (Suzy Aiken). The first episode also included the line, "You're not in Guatemala now, Dr. Ropata" which has since become one of the most widely recognised lines in New Zealand pop culture.

While the show was initially criticised for bad acting and poor storylines, it was praised for its sensitive portrayal of a teenage suicide storyline later on in its first year. Ratings were initially high, but within weeks they had fallen considerably. However, the show was saved from cancellation by the fact that TVNZ had pre-ordered a year's worth of episodes. By May 1993, the show was rating high enough that it was renewed, and later became the highest rating programme in the country for a brief period in August 1993.

In 2001 the show received much media attention in New Zealand when 14 cast members were either let go from their contracts or decided to leave. This was part of the revamp on the show which saw many new characters introduced. Angela and Rangi were both killed off while Minnie, Frank, Kate, Moira, Tamsin, Al, Dean, Blake, Erin, Cassie, Sofia and Paul were all written off. The revamp also saw the return of original character Chris Warner and Rachel McKenna, the clinics transition to a public hospital and the introduction of Toni, Barbara, Adam, Marshall, Judy, Te Hana, Joe, Mihi, Tama and Patricia. 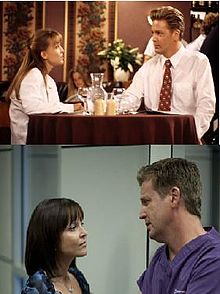 The show reached huge ratings in 2004 when the psychotic killer Dominic Thompson kidnapped series original Chris Warner and attempted to murder him.

2005 saw the departure of the show's longest-serving cast member, Karl Burnett, who played Nick Harrison, after almost 13 years. Burnett was the only cast member who had been with the show since its inception (although the character and the actor did take a sabbatical from the show in 2002).

In November 2005, Shortland Street was the winner of NZ Woman's Day TV Choice Award for Favourite New Zealand show at the 2005 Qantas TV Awards. They won the same award again in the 2006 Qantas TV Awards. On 22 November 2006 it was announced that actress Laurie Foell had decided to leave the series and that her character of Justine Jones would be played by Lucy Wigmore. This marked the first instance of recasting of a regular character.

The show reached huge ratings in 2007 when a serial killer storyline was introduced, with five characters meeting their demise.[3]

Episode 4000 saw the return of series original Dr. Hone Ropata for a six week stint in 2008.

Shortland Street aired its first ever 90 minute episode on 2 August 2010. The episode featured Chris discovering he had a son with series original Alison Raynor in 1996. It also featured the conclusion to the 3 year Kieran Mitchell storyline which saw the shows second highest ever ratings.

In July 2011 Shortland Street achieved a New Zealand first when it made its 2011 feature length episode available to purchase via Facebook, becoming the second ever TV show in the world to utilize this technology.[4]

In August 2011 All Blacks Keven Mealamu, Anthony Boric and Jerome Kaino filmed a scene that aired on the opening night of the 2011 Rugby World Cup on 9 September.[5][6] The show would also have reshoots to incorporate the wins or loses the All Blacks endure during the tournament.[7][8]

Since 1992, many notable faces have appeared on the soap with the only still remaining character from the original cast being that of Chris Warner. Though taking a 4 year break, Chris has been on the show the longest of the current cast and outstayed all of his family who either died or left. Rachel McKenna is another current long standing character, arriving to the soap in 1993 and making regular appearances since. Nick Harrison was also a long running character being on the show till 2005.

Characters on the show attribute and portray numerous different demographics found in New Zealand. These range from the rich and well off (such as Chris Warner) to the struggling and poor (Wendy Cooper). Other areas that are covered are groups such as ethnicities with Asian, Polynesian, Romanian and even Zimbabwean characters appearing on the show. In the first year of the show, it was decided CEO Michael McKenna's personal assistant Jenny, should be a solo mother to help draw in that demographic who statistically would be watching TV at 7pm. The show has also had a long string of family units and teenagers, helping young audiences and families relate to the show.

Several past cast members have made a name for themselves on the international scale with the likes of Temuera Morrison who portrayed Dr. Hone Ropata from 1992–1995 and a guest appearance in 2008, being cast in several Hollywood films and being recognized as Jango Fett in Star Wars. Martin Henderson who portrayed Stuart Neilson from 1992–1995 went on to star in The Ring and starred alongside James Franco in Flyboys and Brad Pitt in Little Fish. Karl Urban who portrayed the recurring role of gay paramedic Jamie Forrest went on to portray Eomer in the Lord of the Rings films which were made in New Zealand, as well as a number of other New Zealand films such as the Price of Milk in 2000 and the Truth about Demons in the same year. He more recently has played Dr. Leonard "Bones" McCoy in the 2009 Star Trek remake and is set to star as Judge Dredd in the upcoming superhero blockbuster Dredd. Marton Csokas who played Leonard Rossi-Dodds from 1993 to 1994, then again from late 1994 to 1995, went on to star in films such as The Bourne Supremacy alongside the previously mentioned Karl Urban and Alice in Wonderland. Besides these breakout stars, Shortland Street has also produced a number of successful actors who participate in successful homegrown material.