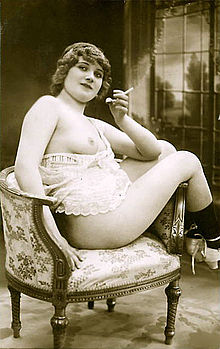 Smoking fetishism (also known as capnolagnia) is a sexual fetish based on the sight or image of a person smoking. For many, the fetish appears to have had its roots in early childhood. It is classically conditioned and shaped by many variables. These could include seeing the smoker as a stereotypically sweet, innocent individual behaving in ways that are considered taboo. For others, it stems from an attraction to more worldly people whose smoking epitomizes their strength and self-confidence. Within gay culture, this fetish often stems from the image of masculinity.

The reasons why a man or woman has a smoking fetish may vary from person to person. It is thought that most smoking fetishists are heterosexual men, though there are small groups of homosexual and bisexual women who have expressed similar interests in the fetish. There are also heterosexual females who have professed to have a smoking fetish,[1] though this particular group has not been the subject of any study. Among heterosexual men, the fetish is often associated with oral fixations and fellatio and it is rather caused by the image of the woman smoking, than by the smell.[2] It seems that the smell and taste of the cigarettes have a greater role to play in women's smoking behavior than in that of men [2]

Some fetishists have a fascination with the addictive properties of nicotine, and its ability to cause harm, and there is a sub-fetish relating to women being harmed by smoking, sometimes called "the dark side", "black lung fetish" or "lung damage". This has been interpreted as an element of misogyny in the community's psychology.

Most of the fetishists are strongly attracted to the glamorous aspect of smoking by women, which has been historically considered a masculine habit. Smoking has been feminized especially with the advent of fashion brands specifically marketed towards women has drawn the attention of fetishists who see the use of these brands as a way for women to increase or enhance their sexual appeal. Most often this fascination is focused on young fashion-conscious professional women who are target demographic for these brands, which are differentiated by slimness and added length over traditional brands of cigarettes.

Additionally, it has been suggested that there is an element of ephebophilia to the fetish, as much of the related literature generated concerns the events surrounding a teenager taking up the habit, virtually always a female making the switch from disgusted non-smoker to hopelessly addicted smoker.

The increasing intensity of anti-smoking campaigns, moreover, turns smoking into a transgressive and taboo act; eroticized images of women smoking may take some of their power from depicting a taboo being broken. Another cultural source for the fetish may be eroticized depictions of women who smoke that come from older motion pictures, especially from the film noir era.

Men also enjoy seeing the smoke pouring from the woman's mouth or nostrils, though the reason behind this is still being researched. On the other hand, it has also been speculated that men who have smoking fetishes are more likely to have mothers who smoked, going back to the old belief that all men are secretly attracted to women who are just like their mothers.

Capnolagnia appears to be a little different in gay men than in heterosexual men. Some gay men take pleasure in watching visually a dominant men smoking, others are attracted to the "innocent young man" picking up smoking and the rebellious aspects of this action. Also, a part of the gay fetishists may consider the action of smoking as a part of growing up and becoming a real man process. In some cases the fetish appears to be linked with the fascination with smoke damage – the fetishist might find it arousing that a healthy man will subject himself to the damage of smoking.

The diagnostic criteria for fetishism are:

A misdiagnosis may occur when a hierarchical proceeding is not followed. According to the International Statistical Classification of Diseases and Related Health Problems manual, as criteria are not repeated in sub-stages this can be mistakable to laymen or medics that have not been educated in the use of this manual.

Capnolagnia symptoms consist in the attraction that one has for women or men who are smoking. Whether it is the smell or just the image, people who get sexually aroused by people of the other or same sex and who are smoking are considered smoking fetishists.

People who experience one or more of the symptoms below are considered to have a smoking fetish:

However, capnolagnia is not considered a disease, but an unusual sexual practice and many of the fetishists do not seek medical help unless this behavior strongly interferes with their daily lives. The majority of people simply learn to accept their fetish and manage to achieve gratification in an appropriate manner.[4]