Omorashi (おもらし / オモラシ / お漏らし?) is a fetish subculture recognized predominantly in Japan, in which participants experience arousal from having a full bladder or a sexual attraction to someone else experiencing the feeling of a full urinary bladder. Outside of Japan, it is not usually identified separately from urolagnia (urine fetish), though they are different things. Westerners who do make the distinction commonly use phrases such as "bladder desperation" or "panty wetting." The Japanese language term from which the subculture's name is derived means "to wet oneself," literally translated, "leaking." The word is also occasionally romanized as "omorasi" in the Kunrei-shiki romanization system.

Attitudes toward sexuality in omorashi media

Most fetish activities concerning the use of bodily waste are considered by the general public as "hardcore," taboo, or edgeplay.[1] However, because the object of the fetish is clothed incontinence, omorashi videos do not feature direct sexual contact. The focus on clothed rather than overtly sexual images makes garment fetishism a prominent feature in most omorashi erotica: commonly featured outfits include those worn by schoolgirls, female working professionals, and other women attempting to look dignified before succumbing to the need to urinate.

There are many ways in which omorashi fetishism is practiced in Japan.

One of the variations is known as omorashi yagai, which translates as "to wet oneself outdoors (or publicly)." A further variation includes yagai hōnyō, or "outdoor (or public) urination," in which the subject publicly removes their clothes to urinate. Other yagai hōnyō practitioners operate much like graffiti artists, attempting the public urination acts without being caught.[2]

Another variation of omorashi play is omutsu omorashi, less commonly called oshime omorashi, both of which translate as "to wet oneself in a diaper." This omutsu variation is essentially the same as the standard omorashi, except that the participants are wearing a diaper instead of panties. Diapers may be favorable for public wetting because they render it more discreet and eliminate mess, and their use is not limited specifically to those with a diaper fetish. However, omorashi fetishists specifically interested in this aspect of the subculture could be considered a Japanese variation of the diaper lover community.

In the years following the end of World War II, eroticism had been gradually making its way into Japanese cinema. The first kiss to be seen in Japanese film- discreetly half-hidden by an umbrella- caused a national sensation in 1946.[3] Throughout the 1940s and early 1950s, nudity in Japanese movie theaters, as in most of the world, had been a taboo.[4] Now, with foreign films such as Ingmar Bergman's Summer with Monika (1953), Louis Malle's Les Amants (1958), and Russ Meyer's The Immoral Mr. Teas (1959) introducing female nudity into international cinema, sexuality in films was being imported to Japan without problem.[4] Nevertheless, until the early 1960s, graphic depictions of nudity and sex in Japanese film could only be seen in single-reel "stag films," made illegally by underground film producers such as those depicted in Imamura's film The Pornographers (1966).[5]

It was during that period of the early sixties that the first wave of the Pink film began. Nudity and sex officially entered Japanese cinema with Satoru Kobayashi's controversial and popular independent production Flesh Market (Nikutai no Ichiba, 1962), which is considered the first true pink film.[6] Made for 8 million yen, Kobayashi's independent feature film took in over 100 million yen.

The popularity of Pink films continued to grow, and by the early 1970s, sex and sexuality had found their way into even the most mainstream Japanese films. So much so in fact, that many of the major studios would be forced to rely on such films to prevent the loss of their theatrical audience. With their access to higher production-values and talent, some of these films became critical and popular successes.[7]

In order to avoid Japan's strict censorship laws, which limited depictions of actual sex and pubic hair, these movies often relied on fetish elements which could skirt such restrictions. One such film, Terrifying Girls' High School: Lynch Law Classroom in 1973, would be the first to depict an omorashi scenario to a theatrical audience.

As the AV (adult video) genre took hold in the 1980s, videos specifically devoted to omorashi began to arise. Several notable AV idols have starred in such scenarios, including Sakura Sakurada. However, perhaps because of its softcore nature, omorashi never became relegated to solely pornographic fare.

Today, Japanese omorashi fans also enjoy game show-style videos in which contestants must compete in various urine-holding challenges.[8] The Giga[9] video company's "Desperation Tournament" series is an example of this kind of contest. One such activity has been a panel of contestants competing to hold their bladders or guess which woman has to use the restroom.

Some eroge game designers have capitalized on omorashi fandom's niche market by including the occasional wetting scene in their games a selling point. MAID iN HEAVEN SuperS,[8] for example, which contains only a single, diapered wetting scene, was used to spin-off an entire set of collectible figures in various omorashi poses. [9] These PVC model figures were created by toy manufacturer Giga Pulse, which is not related to the video company of similar name. 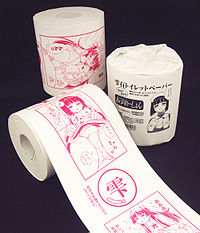 With the translation of omorashi into manga and its subsequent adoption by otaku fandom, a number of omorashi themed collectibles have appeared on the Japanese market, including figurines[10][11] and "Shizukuishi kyuun kyuun toilet paper"[12] printed with wetting scenes featuring the character Shizukuishi from the omorashi manga, Iinari! Aibure-shon.[10]

Though there is a small community devoted to such fetishism outside of Japan, it is usually overshadowed by the more hardcore fetishes, urolagnia and urophagia. Outside of Japan, omorashi groups usually refer to their shared interest as "desperation" fetishism, often making a distinction between content featuring males and females. Some English language websites with a focus on females simply identify as "panty wetting." Since such sites abandon the "desperation" title which implies an effort not to wet, they are more likely to include nudity, overtly sexual models and situations, as well as purposeful (as opposed to accidental) wetting.

Though there is generally no wide acceptance of incontinence-based play, recent studies in England have shown that urinary incontinence during sexual activity is a "common, but rarely volunteered symptom" observed in 24% of sexually active women. Moreover, no connection could be identified with any specific abnormality of bladder function associated with these symptoms, indicating that such leakage is both normal and healthy.[13][14] 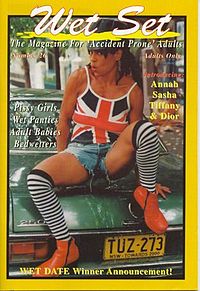 Because of the western stigma in numerous countries against wetting, omorashi subculture has not received such diverse exposure in non-Japanese media. In some countries, governments have even banned such materials. In New Zealand for example, creating, trading, distributing (e.g. making available on one's web page) anything containing "the use of urine or excrement in association with degrading or dehumanizing conduct or sexual conduct" is a felony punishable by up to ten (10) years in jail.[15][16]

One such example is the Australia based, internationally distributed, [17] Wet Set Magazine. The welcome header on their website reads:

Though Wet Set publications were originally only available in English, readership in German speaking countries has since proved high enough to justify printing some materials in German.

Though Wet Set does not generally acknowledge the comparatively large Asian fan base over any other country, some Western advocates of omorashi recognize a heavy Asian influence. For instance, in a February 2006 issue of The Brooklyn Rail, American poet Garrett Caples of Oakland, California chose to describe the shooting of an omorashi film in a Japanese setting.[12]

Aside from lending Western omorashi media an "authentic" quality, the inclusion of Japanese models and settings might also be seen as an attempt to play upon the stereotype of ultrapassivity globally associated[18] with Asian women, further enhancing their perceived moe qualities and catering to Asian fetishists.

Cat Chaser Conspiracy, an American all-girl punk rock band, became known during the 80s and 90s for performing a panty-wetting stage act as they played songs about wetting themselves. Some "wetty gurl" fans would wet themselves when these songs were played.[19] Before their breakup in 1999, members made regular appearances in the pages of Wet Set magazine. Their second vocalist, Moppet, appeared as a model in a number of photosets, including #84 through 89.[20]

Another all-female band, Rockbitch, would often use omorashi as part of their performance, wetting themselves onstage and also peeing on willing participants in the audience.

Other examples of omorashi in English language rock music include another all-female group, Crucified Barbara, from Sweden. Their song "I Wet Myself" from their debut album In Distortion We Trust states: