Fat fetishism is the strong or exclusive sexual attraction to overweight or obese people.[1] As well as traditional attraction, the topic also incorporates feederism and gaining, where sexual gratification is obtained via the process of gaining body fat. Fat fetishism also incorporates stuffing and padding, whereas the focus of arousal is on the sensations and properties of a real or simulated gain. 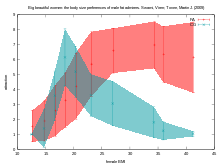 Physical attraction of 47 male fat admirers (FA) towards 10 female figures from the given BMI range, compared with a control group (CG)

A 2009 study found that heterosexual male fat admirers preferred females that were clinically overweight and rated both overweight and obese women more positively than slighter individuals. The study also found that participants reacted positively to a much wider range of figures than a control group, even rating emaciated figures higher. It concludes "these findings suggest that an explanation for fat admiration may be that FAs are rejecting sociocultural norms of attractiveness".[1]

Padding refers to the practice of padding or layering clothing in such a way that it simulates a distended abdomen, for the purposes of arousal, and is often used as a form of experimentation with increased size, but can also be a form of role play.

Inflation refers to the practice of inflating (typically with air or liquid), until the abdomen is distended, in such a way that it simulates a stuffing or bloating, but without food.

Stuffing or bloating refers to the practice of eating until the abdomen is distended. The act of stuffing can cause arousal, perhaps due to the pressure within the body upon the sexual organs. Also, as the swollen belly can mimic pregnancy, which is arousing to maiesiophiles.

Gaining refers to the relationship between gainers and encouragers, where one or both members engage in activities designed to promote the gaining of body fat. Often considered synonymous with feederism, the term is used more primarily in the gay male nomenclature, but is not exclusive to gay males in practice. Categorically, gaining differs from feeding in the way weight gain is approached. For some, gaining focuses on being encouraged, while for others gaining is done individually - sometimes both.

Feederism describes sexual relationships where both members obtain gratification from the gaining of body fat. Feederism refers to the acts of feeding, encouraging eating, or being served large quantities of food. Sexual pleasure is derived from the act of eating itself, and/or from the process of becoming fatter. Pleasure may be derived from specific changes to specific areas of the body.

Immobility refers to the state in which someone has either given up walking and exercise in order to gain more weight quicker, usually by sitting in the same place without moving for days, weeks or months and eating nonstop, or where a feedee, foodee or gainer (sometimes even people outside of the FA community, with eating disorders) becomes so heavy that movement is either impossible or impractical (examples include extreme slowness, difficulty fitting through door frames, and difficulty with climbing stairs).

Several terms refer to the roles adopted within the culture:

Some people consider Fat Admiration to be fetishistic, while others feel that their attraction to bigger people is at most a strong preference, but not a fetish. Bears and Chubs often share similar sentiments.

Some people involved in the fat acceptance movement argue that fat fetishism undermines social movements towards fat acceptance, through counter-productive objectification and dehumanization of fat people. They argue that often, fat fetishists (specifically feeders) derive sexual pleasure from increasing immobility, disability, or helplessness in the fat person through weight gain. Some people take issue with the coercion which is sometimes involved in fat fetishism.

NAAFA draws a distinction between fat fetishism and fat admiration: NAAFA states that "a preference for a fat partner is as valid as any other preference based on physical characteristics",[3] but also condemns feederism as coercive.[2] NAAFA advocate that people "celebrate the current weight of their partner as one aspect of the whole person".[2]