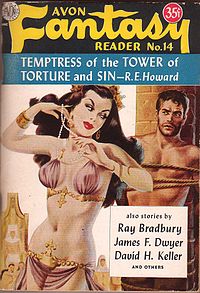 A rape fantasy or a ravishment is a sexual fantasy involving imagining or pretending being coerced or coercing another into sexual activity. In sexual role-play it involves acting out roles of coercive sex. Rape pornography is literature or images associated with rape as a means of sexual arousal.

Since the illusion of non-consensuality is important to the fantasy, one or more safewords are typically employed. This way, a participant can protest without stopping the scene, unless the safeword is used. Often a variation on the "stop-light" system is used, with different colors designating different messages: "red" to stop everything, "yellow" to slow down or take it easy, and so forth. For scenes where there is an element of surprise, the top or "ravisher" may use a "startword" or other identifying signal.[1]

In consensual ravishment scenes, all participants carefully negotiate what will transpire beforehand. Limits are respected and made very clear, to maintain safe, sane and consensual play. Such negotiation would also include discussion of emotional issues for both partners, especially if there has been a prior history of actual sexual abuse or assault.[1]