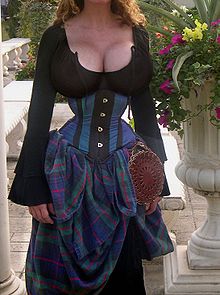 A corset reducing the circumference of the waist to 16 inches (41 cm).

Tightlacing (also called corset training and waist training) is the practice of wearing a tightly-laced corset to achieve extreme modifications to the figure and posture and experience the sensations of a very tight corset. Those who practice tightlacing are called tightlacers. Some tightlacers call the corsets they wear training corsets.

The most frequent aim of tightlacing is a slim waist. Depending on the silhouette desired, the shape of the ribcage may be altered as well. Wearing a corset can also change the bustline, by raising the breasts upwards and shaping them, flattening the stomach, and improving posture. However, these effects are only temporary and will be lost on removing the corset. Indeed, excessive corset wearing has been claimed to weaken certain muscles, making it more difficult to maintain posture without a corset.[citation needed]

Although some tightlacers aim to get their waists as small as possible, others prefer to reduce their waists to a certain point and go no further as they consider that proportion and aesthetics are more important than achieving the smallest possible measurement. For example, cross-dressing males may seek to make a more feminine-appearing waistline through tightlacing, but do not want to make their waists too small, as this would look unnatural.[citation needed] 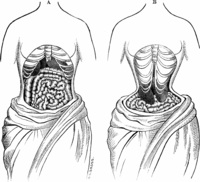 Two sketches from 1884 depicting what, at the time, was believed the way the inside of the body looked when wearing a corset.

Corsets were first worn by the Minoans of Crete by both men and women,[1] but didn't become popular again until during the 16th century and remained a feature of fashionable dress until the French Revolution (1789). These corsets were mainly designed to turn the torso into the fashionable cylindrical shape although they narrowed the waist as well. They had shoulder straps; they ended at the waist; they flattened the bust and, in so doing, pushed the breasts up. The emphasis of the corset was less on the smallness of the waist than on the contrast between the rigid flatness of the bodice front and the curving tops of the breasts peeking over the top of the corset. There are no records of tightlacers at this time.

The corset then went into eclipse. Fashion embraced the Empire silhouette: a Graeco-Roman style, with the high-waisted dress that was unique to this style gathered under the bosom. The waist was de-emphasised, and dresses were sewn from thin muslins rather than the heavy brocades and satins of aristocratic high fashion.

The reign of the Empire waist was short. In the 1830s, shoulders widened (with puffy gigot sleeves or flounces), skirts widened (layers of stiffened petticoats), and the waist narrowed and migrated towards its "natural" position. By the 1850s, exaggerated shoulders were out of fashion and waistlines were cinched at the natural waist above a wide skirt. Fashion had achieved what is now known as the Victorian silhouette.

In the 1830s, the artificially inflated shoulders and skirts made the intervening waist look narrow, even with the corset laced only moderately. When the exaggerated shoulders disappeared, the waist itself had to be cinched tightly in order to achieve the same effect. It is in the 1840s and 1850s that tightlacing is first recorded. It was ordinary fashion taken to an extreme.

As it was accepted that a corseted waist was the ideal, it is hard to define tightlacing strictly, or to say what proportion of Victorian women practiced it. Today's waist measurements are unacceptable as a guide, since:

A corset, recommended by doctors and nurses for Tightlacing. 1887

Young and fashionable women were most likely to tightlace, especially for balls, fashionable gatherings, and like occasions for display. Older, poorer, and primmer women would have laced moderately – just enough to be decent.

The Victorian and Edwardian corset differed from earlier corsets in numerous ways. The corset no longer ended at the waist, but flared out and ended several inches below the waist. The corset was exaggeratedly curvaceous rather than cylindrical. It was also much sturdier in construction, thanks to improvements in technology. Spiral steel stays curved with the figure rather than dictating a cylindrical silhouette. While many corsets were still sewn by hand to the wearer's measurements, there was also a thriving market in cheaper mass-produced corsets.

In the late years of the Victorian era, medical reports and rumors claimed that tightlacing was fatally detrimental to health (see Victorian dress reform).[citation needed] Women who suffered to achieve small waists were also condemned for their vanity and excoriated from the pulpit as slaves to fashion. It was frequently claimed that too small a waist was ugly rather than beautiful.[citation needed] Dress reformers exhorted women to abandon the tyranny of stays and free their waists for work and healthy exercise.

Despite the efforts of dress reformers to eliminate the corset, and despite medical and clerical warnings, women persisted in tightlacing as long as it was fashionable. In the early 1900s, the small corseted waist began to fall out of fashion. The feminist and dress reform movements had made practical clothing acceptable for work or exercise. The rise of the Artistic Dress movement made loose clothing and the natural waist fashionable even for evening wear. Couturiers like Fortuny and Poiret designed exotic, alluring costumes in pleated or draped silks, calculated to reveal slim, youthful bodies. If one didn't have such a body, new undergarments, the brassiere and the girdle, promised to give the illusion of one.

Corsets were no longer fashionable, but some people still felt that they were sexy. Corsets entered the underworld of the fetish, along with items such as bondage gear and vinyl catsuits. In the 1960s, 1970s, 1980s and 1990s, fetish wear became a fashion trend and corsets made something of a recovery. They are often worn as top garments rather than underwear. However, most corset wearers own a bustier or two for evening wear; they do not tightlace. Historical re-enactors also wear corsets, but few tightlace.

Tightlacers typically wear a corset for at least 12 hours a day, every day, when they are most active, although more serious tightlacers (particularly those trying to achieve the smallest waist they can) wear corsets for up to 23 hours a day, taking the corset off only in order to bathe.

Tightlacers sometimes have a partner, called a trainer, to help and support them. However, it is possible for somebody to tightlace without a partner. 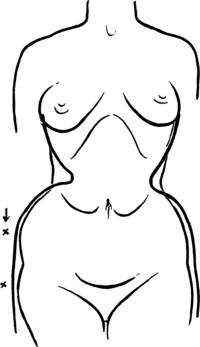 Chest developed before corset worn. A scientific sketch from 1910 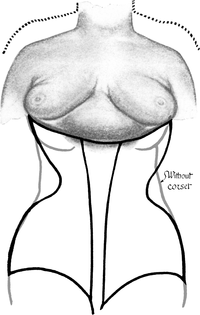 Main article: Effects of tight lacing on the body

A typical training routine begins with the use of a well-fitted corset (most serious tightlacers have at least one custom-tailored corset) and very gradual decreases in the waist circumference. Lacing too tight too fast can cause extreme discomfort and potential short-term problems such as shortness of breath and faintness, indigestion, and chafing of the skin.

The primary effect of tightlacing is the decreased size of the waist. The smallest waist recorded is that of Ethel Granger, who tightlaced for most of her life and achieved a waist of 13 inches (33 cm): a reduction of over ten inches.[2] Such extreme reductions take a very long time to achieve. At first, corsets with waist measurements four inches smaller than the tightlacer's natural waist size are recommended. The length of time it will take a tightlacer to get used to this reduction will vary on his or her physiology; a large amount of fat on the torso and strong abdominal muscles will mean that it takes longer for the tightlacer to wear their corset laced closed at the back. Thereafter, reducing another couple of inches is not much more difficult, but each inch after a six-inch reduction can take a year to achieve.

The diminished waist and tight corset reduce the volume of the torso. This is sometimes reduced even further by styles of corset that force the torso to taper towards the waist, which pushes the lower ribs inwards. As a consequence, internal organs are moved closer together and out of their original positions in a way similar to the way that a pregnant woman's expanding uterus causes the organs to be displaced.

The volume of the lungs diminishes and the tightlacer tends to breathe intercostally – that is, with the upper portion of the lungs only, rather than the whole (see shallow breathing). Intercostal breathing is what gives the image of "heaving bosoms".[citation needed] Due to the lower portion of the lungs being used less there is often a mucosal build-up there; a slight and persistent cough is the sign of the body trying to clear this (and might also have led to the Victorian hypothesis that corsets caused tuberculosis).

The liver is pressed upwards. As it continually renews itself, it adapts to fit its new position, and in a long-term tightlacer it can develop ridges where it rests against the ribs. It is also possible that tightlacing exacerbates the tendency of some livers to develop accessory lobes, to the point where the accessory lobe becomes as large as the main portion of the liver. The point where the lobe and liver connect can be quite thin, and again, this might have led to one of the Victorian myths about tightlacing: that a tightlacer can wear her corset so tight that it "cuts" her liver in half.

Theoretically it is possible to fracture the ribs through tightlacing, but the necessary pressure would be brutal and the tightlacer would feel acute pain.