United States Court of Appeals for the Fifth Circuit

United States Court of Appeals for the Fifth Circuit

The United States Court of Appeals for the Fifth Circuit (in case citations, 5th Cir.) is a federal court with appellate jurisdiction over the district courts in the following districts:

History of the court 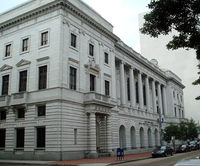 This court was created by the Evarts Act on June 16, 1891, which moved the circuit judges and appellate jurisdiction from the Circuit Courts of the Fifth Circuit to this court. At the time of its creation, the Fifth Circuit covered Florida, Georgia, Alabama, Mississippi, Louisiana, and Texas.

On October 1, 1981, under Public Law 96-452, the Fifth Circuit was split: Alabama, Georgia, and Florida were moved to the new Eleventh Circuit.

On March 31, 1982, the Fifth Circuit lost jurisdiction over the Panama Canal Zone as the Canal Zone transferred to Panamanian control.

During the late 1950s, Chief Judge Elbert Tuttle and his three colleagues John Minor Wisdom, John Brown, and Richard Rives became known as the "Fifth Circuit Four", or simply "The Four", for decisions crucial in advancing the civil rights of African-Americans. In this they were usually opposed by their fellow Fifth Circuit Judge Benjamin F. Cameron of Mississippi, until Cameron's death in 1964.[2]

Hurricane Katrina struck New Orleans on August 29, 2005, devastating the city and slightly damaging the John Minor Wisdom Courthouse. All deadlines concerning filings were extended. The court temporarily relocated its administrative operations to Houston, but the court has now returned to normal operations in New Orleans.

As of October 2011, the active judges on the court are as follows (chief judge in bold)[3]:

Fifty-nine judges formerly served on the court but no longer do[3]:

The court has had 29 seats for active judges. Twelve of these seats were reassigned to the United States Court of Appeals for the Eleventh Circuit, leaving a seventeen-seat court. The seats are numbered in the order in which they were filled. Judges who retire into senior status remain on the bench but leave their seat vacant. That seat is filled by the next circuit judge appointed by the president.