United States Court of Appeals for the Second Circuit

United States Court of Appeals for the Second Circuit 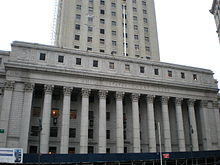 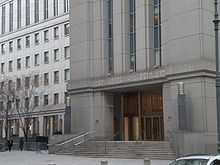 The United States Court of Appeals for the Second Circuit (in case citations, 2d Cir.) is one of the thirteen United States Courts of Appeals. Its territory comprises the states of Connecticut, New York, and Vermont, and the court has appellate jurisdiction over the district courts in the following districts:

The Second Circuit ordinarily has its clerk's office and hears oral arguments at the Thurgood Marshall United States Courthouse in Foley Square in lower Manhattan. Due to renovations at that building, during the summer of 2006 the court temporarily relocated to the Daniel Patrick Moynihan United States Courthouse in New York City across Pearl Street from the Marshall Courthouse. Some of the Court's offices, including the Office of Legal Affairs, have moved to the Woolworth Building for the duration of the renovations, which are expected to take several years.[1]

With 12 active and 12 senior judges, the Second Circuit is midsized among the thirteen United States courts of appeals.

Forty-three judges used to serve on the court, but no longer do[2]:

The court has thirteen seats for active judges, numbered in the order in which they were filled. Judges who retire into senior status remain on the bench but leave their seat vacant. That seat is filled by the next circuit judge appointed by the president.