United States Court of Appeals for the Tenth Circuit

United States Court of Appeals for the Tenth Circuit 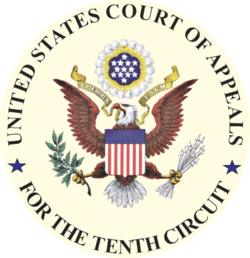 The United States Court of Appeals for the Tenth Circuit (in case citations, 10th Cir.) is a federal court with appellate jurisdiction over the district courts in the following districts:

These districts were part of the Eighth Circuit until 1929. The court is composed of twelve active judges and is based at the Byron White U.S. Courthouse in Denver, Colorado. It is one of thirteen United States courts of appeals. 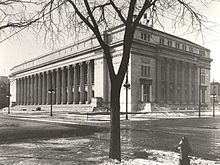 U.S. Post Office and Courthouse, as it appeared around 1916. 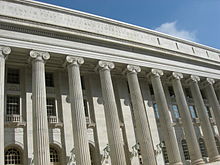 The Byron White U.S. Courthouse, the seat of the U.S. Court of Appeals for the 10th Circuit, as it appears today.

Congress created a new judicial circuit in 1929 to accommodate the increased caseload in the federal courts. Between 1866 and 1912, twelve new states had entered the Union and been incorporated into the Eighth and Ninth Circuits. The Eighth Circuit encompassed 13 states and had become the largest in the nation.[1]

Chief Justice William Howard Taft suggested the reorganization of the Eight Circuit Court in response to widespread opposition in 1928 to a proposal to reorganize the nation's entire circuit structure. The original plan had sprung from an American Bar Association committee in 1925 and would have changed the composition of all but two circuits.[1]

The House of Representatives considered two proposals to divide the existing Eighth Circuit. A bill by Representative Walter Newton would separate the circuit’s eastern and western states. An alternate proposal divided the northern from the southern states. With the judges and bar of the existing Eighth Circuit for Newton's bill and little opposition to dividing the circuit, lawmakers focused on providing for more judgeships and meeting places of the circuit courts of appeals in their deliberations.[1]

Congress passed a statute that placed Minnesota, Iowa, North Dakota, South Dakota, Nebraska, Missouri, and Arkansas in the Eighth Circuit and created a Tenth Circuit that included Wyoming, Colorado, Utah, New Mexico, Kansas, and Oklahoma. Three additional judgeships were authorized and the sitting circuit judges were reassigned according to their residence. The Tenth Circuit was assigned a total of four judgeships.[2]

The court has twelve seats for active judges, numbered in the order in which they were filled. Judges who retire into senior status remain on the bench but leave their seat vacant. That seat is filled by the next circuit judge appointed by the president.