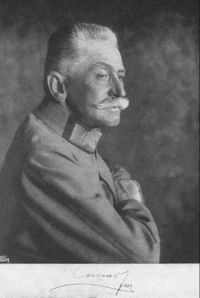 Conrad was born in Penzing, a suburb of Vienna. His father was a retired Hussar colonel, originally from south Moravia. His mother was the daughter of the famous Vienna artist Kübler. Conrad's great grandfather had been raised to the nobility in 1816 adding "von Hötzendorf", the surname of his wife from the Palatinate, as his predicate.

Conrad was educated at the Theresianische Militärakademie and at age 19 received a commission as lieutenant in a Jäger unit.[2][3] After graduating from the Kriegsschule in 1876, he transferred to the General Staff Corps.[4] In 1878-1879, these duties brought him to Bosnia and Herzegovina, when those two Turkish provinces were assigned to the military administration of Austria-Hungary. He was also a member of the staff during the insurrection in Dalmatia, in 1882.

In the fall of 1888, he began a new appointment as a professor of tactics in the Kriegsschule (military academy) in Vienna,[2] a position he prepared for by touring the battlefields of the Franco-Prussian War.[5]

Return to command and Chief of Staff

Conrad requested transfer back to command in 1892 and took charge of an infantry regiment. Later that year he commanded the 55th Infantry Brigade in Trieste and was promoted to major general.[4] After acting against a major Italian uprising in the city in 1902, he was made Feldmarschalleutnant and took command of the 8th Infantry Division at Innsbruck in 1903.[4]

By the time of his appointment to chief of staff for the Austro-Hungarian armed forces in November 1906, he had established a reputation as a teacher and writer. Like other Austro-Hungarian officers of his generation, he had little direct combat experience,[6] but had studied and written extensively about theory and tactics. His published works on infantry tactics sold well and were printed in multiple editions.[7] He was a tireless campaigner for modernization of the armed forces. 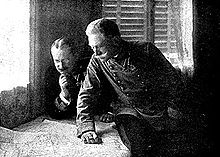 Conrad was one of the main proponents of war with Serbia in response to the assassination of Archduke Franz Ferdinand.

Conrad often proposed unrealistically grandiose plans, disregarding the realities of terrain and climate. The plans that he drew up frequently underestimated the power of the enemy. For example, the Serbian army proved far more effective than he had expected (see Serbian Campaign (WWI) for details). Also, his first offensives against Russia were remarkable for their lack of effect combined with massive human cost. His mistakes led to the disastrous first year of war that crippled Austro-Hungarian military capabilities. The most disastrous defeat came in 1916, in the Brusilov Offensive by Russia. The Austro-Hungarian forces under Conrad's command lost nearly 1.5 million men, and were never again capable of mounting an offensive without German help. Most of Austria's victories were possible only in conjunction with German armies, on which the Austro-Hungarian army became increasingly dependent.

On the other hand, the historian Cyril Falls argues that Conrad was probably the best strategist of the war and that his plans were brilliant in conception. The German generals in the east based most of their successful offensive operations on Conrad's plans.[8] To his admirers he was a "military genius"; one such admirer was the Soviet general and theorist Boris Shaposhnikov in his book Mozg Armii, in which Conrad was presented as a model for a good Chief of the General Staff. On the other hand, "Franz Conrad von Hötzendorf never admitted his share of responsibility for the onset of the First World War or the defeat of Austria-Hungary... he claimed to have been "just a military expert" with no voice in the key decisions."[9]

Following the accession of Emperor Karl to the throne in November 1916, Conrad was elevated to the rank of field marshal, one of only three men in Austria-Hungary to hold that rank at the time.[10] While still the heir-apparent, the new emperor had reported to Franz Josef that the "mismanagement" in the army's high command could not be cleared out until Conrad was replaced, but admitted that finding someone to take his role would not be easy.[10] Yet under the new emperor, Conrad's powers were gradually eroded. In December Karl took supreme command of the army and operational control of all combat units in the army and navy. On March 1, 1917, Karl dismissed Conrad, who then requested retirement. The emperor personally asked him to remain on active duty, and when Conrad accepted, he was placed in command of the South Tyrolean Army Group.[11]

In the late spring of 1918, the failure of the Austro-Hungarian offensives against the Italians, with costly and bloody assaults led by both Conrad and Boroević, brought condemnation upon the imperial leadership.[12] Further complicating Conrad's image was his identification with those in the government intent on continuing the war.[10] In this atmosphere, Conrad, described as a "broken man", was dismissed on July 15, perhaps in an effort to deflect further criticism.[13]

Conrad married Wilhelmine le Beau in 1886, with whom he had four sons. He would later marry Virginia von Reininghaus in 1915, against the wishes of his children.

In military matters, Conrad emphasized the importance of aggressive, well-trained infantry and the strategic and tactical offensive.[4]

Conrad was something of a social Darwinist, and believed a battle between German and Slavic civilization was inevitable. The power of the Magyar elite within Austria-Hungary troubled him, as he believed it weakened and diluted what he saw as an essentially German empire. He also worried about Italian ambitions in the Balkans. However, his greatest ambition was for a pre-emptive war against Serbia in order to neutralize the threat that he believed they posed, and at the same time change the political balance within Austria-Hungary against the Magyars by incorporating more Slavs. According to Hew Strachan, "Conrad von Hötzendorf first proposed preventive war against Serbia in 1906, and he did so again in 1908-9, in 1912-13, in October 1913, and May 1914: between 1 January 1913 and 1 January 1914 he proposed a Serbian war twenty-five times."

Regarding personal names: Graf is a title, translated as Count, not a first or middle name. The female form is Gräfin.