He was a 13th century Maharashtrian Hindu saint (Sant - a title by which he is often referred), poet, philosopher and yogi of the Nath tradition whose works Bhavartha deepika teeka (a commentary on Bhagavad Gita, popularly known as "Dnyaneshwari"), and Amrutanubhav are considered to be milestones in Marathi literature.

According to Nath tradition Sant Dnyaneshwar [1] was the second of the four children of Vitthal Govind Kulkarni and Rukmini, a pious couple from Apegaon near Paithan on the banks of the river Godavari. Vitthal had studied Vedas and set out on pilgrimages at a young age. In Alandi, about 30 km from Pune, Sidhopant, a local Yajurveda brahmin, was very much impressed with him and Vitthal married his daughter Rukmini.

After some time, getting permission from Rukmini, Vitthal went to Kashi(Varanasi in Uttar Pradesh, India), where he met Ramananda Swami and requested to be initiated into sannyas, lying about his marriage. But Ramananda Swami later went to Alandi and, convinced that his student Vitthal was the husband of Rukmini, he returned to Kashi and ordered Vitthal to return home to his family. The couple was excommunicated from the brahmin caste as Vitthal had broken with sannyas, the last of the four ashrams. Four children were born to them; Nivrutti in 1273, Dnyandev (Dnyaneshwar) in 1275, Sopan in 1277 and daughter Mukta in 1279. According to some scholars their birth years are 1268, 1271, 1274, 1277 respectively. It is believed that later Vitthal and Rukmini ended their lives by jumping into the waters at Prayag where the river Ganges meets Yamuna hoping that their children would be accepted into the society after their death.

The couple set out on a pilgrimage with their children to Tryambakeshwar, near Nashik, where their elder son Nivrutti (at the age of 10) was initiated in to the Nath tradition by Gahininath. The paternal great grandfather of Dnyaneshwar had been initiated into the Nath cult by Goraksha Nath (Gorakh Nath). The orphaned children grew up on alms. They approached the brahmin community of Paithan to accept them but the brahmins refused. According to the disputed "Shuddhi Patra" the children were purified by the brahmins on condition of observing celibacy. Their argument with the brahmins earned the children fame and respect due to their righteousness, virtue, intelligence, knowledge and politeness. Dnyaneshwar became the student of Nivruttinath along with his younger siblings Sopan and Mukta at the age of 8. He learnt and mastered the philosophy and various techniques of kundalini yoga. 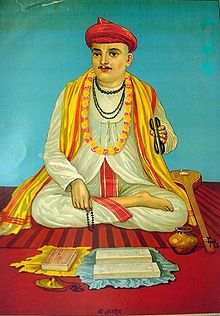 The child moved to Nevasa, a village in Ahmednagar district, where Dnyaneshwar began his literary work when Nivruttinath instructed him to write a commentary on Bhagavad Gita. The Dnyaneshwari or Bhavartha Deepika Teeka was written down by Sacchidananandbaba from discourses by Dnyaneshwar. By the time the commentary was complete Dnyaneshwar was only 15 years old.

Considered a masterpieces of Marathi literature, the Dnyaneshwari's 18 chapters are composed in a metre called "ovi". Dnyaneshwar liberated the "divine knowledge" locked in the Sanskrit language to bring that knowledge into Prakrit (Marathi) and made it available to the common man. He was confident that he would write in marathi in as good or better manner than Sanskrit.

Amrutanubhav, written some time after, is difficult and finds fewer readers[citation needed]. Containing 10 chapters and 806 ovi, the basis of this book is non dualism (advaita siddhanta). The seventh and biggest chapter (295 ovi) is the most important. Apart from Dnyaneshwari and Amrutanubhav works like Changdev Paasashti (a collection of 65 ovi addressed to an allegedly 1400 years old yogi named Changdev Maharaj), Haripath and around 1000 "abhanga" (authorship of many is disputed due to differences in writing style) are attributed to Dnyaneshwar.

The siblings Muktabai, Sopan, Dnyaneshwar and Nivruttinath seated on the flying wall greet Changdev seated on a tiger. In the centre, Changdev bows to Dnyaneshwar.

Nivruttinath was the elder brother of Dnyaneshwar. Nivrutti was an authority on philosophy of the Nath sect. Gahininath, one of the nine Nath gurus, accepted Nivrutti as his disciple and initiated him into the Nath sect, instructing him to propagate devotion to Krishna. Dnyaneshwar accepted his elder brother as his own guru. After the early Samadhi of Dnyaneshwar, Nivrutti travelled with his sister Mukta on a pilgrimage along the Tapi river where they were caught in a thunderstorm and Mukta was swept away. Nivrutti took to salvation (Samadhi) at Tryambakeshwar. Around 375 abhangas are attributed to him but, the authorship of many of them is disputed due to difference in writing style and philosophy.

Sopandev was a younger brother Sopandev attained ‘samadhi' at Saswad near Pune. He wrote a book "Sopandevi" based on the Bhagvadgita's Marathi interpretation along with 50 or so abhangas. Muktabai was the youngest of the siblings, Muktai or Muktabai was known for her simple and straightforward expression of thoughts. She could be considered as one of the first poetesses in Marathi along with Mahadamba. There are around 40 abhangas attributed to her. She accepted Yogi Changdev as her disciple. 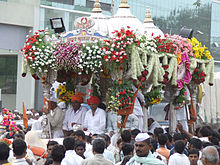 Dnyaneshwar's palkhi (palanquin), holding the footwear of the saint, is carried with honour in a silver bullock cart from Alandi to Pandharpur.

Dnyaneshwar was probably introduced into the Vaishnava Sampradaya (or Vitthala Sampradaya) of Pandharpur (founder of the Varkari movement), influenced by the piety of contemporary members of the movement such as Namdev, Gora Kumbhar, Savta Mali, Janabai, Narhari Sonar, Chokha Mahar and Sena Nhavi, after his writing of Dnyaneshwari since there is no mention of it in that work.[citation needed] The Varkaris soon considered him their teacher and spiritual leader, who initiated his contemporaries associated with the Dvaita (dualism) school of the bhakti movement into Advaita (non-dualism).[citation needed] He strongly advocated jnana yukta bhakti (devotion guided by knowledge) and believed that one can not be liberated unless one attains the true and divine knowledge of Brahman.

Entering into a state of Samadhi

After having composed Amritanubhava, Dnyaneshwar made a pilgrimage to northern India with Namdev and other saints. After completing this pilgrimage he expressed his intention to enter into a state of Samadhi because he felt that the mission of his life was complete. Although many scholars believe that his disappearance at a young age could be the handiwork of those who were against his Bhagwat dharma. It is widely propagated that at the age of 21 on 13th day of the second half of Kartik in Shaka 1218,[3] Dnyaneshwar entered into a permanent state of Sanjeevan Samadhi [2] at Alandi in Maharashtra, India.[4]

An account of this incident is described by the contemporary Saint Namdev in a set of Abhangas named as Samadheeche Abhanga (translation: The Abhangas of Samadhi) .

Stories recounted in many holy books of the Bhagawata Sampradaya sect about Dnyaneshwar’s life are full of miracles, such as the baking of bread (mānde, or roti in Hindi) on his heated back, and his making a wall move.

Dnyaneshwar wrote the Pasayadan which is a prayer for the general well being of the people. Pasaydan is included at the end of the Dynaneshwari.