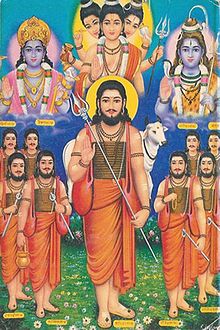 The Navnath
For the star known as El Nath, see Beta Tauri.

The Sanskrit word nāthá or नाथ, is the proper name of a Hindu initiatory tradition and the word itself literally means "lord, protector, refuge". The related Sanskrit term Adi Natha means first or original Lord, and is therefore a synonym for Shiva, Mahadeva, or Maheshvara, and beyond these supramental concepts, the Supreme Absolute Reality as the basis supporting all aspects and manifestations of consciousness.

The Nath tradition is a heterodox siddha tradition containing many sub-sects. It was founded by Matsyendranath and further developed by Gorakshanath. These two individuals are also revered in Tibetan Buddhism as Mahasiddhas (great adepts) and are credited with great powers and perfected spiritual attainment.

The Natha Sampradaya (Devanagari:नाथ संप्रदाय), is a development of the earlier Siddha or Avadhuta Sampradaya,[1] an ancient lineage of spiritual masters. Its founding is traditionally ascribed as an ideal reflected by the life and spiritual attainments of the guru Dattatreya, who was considered by many to have been a human incarnation of Lord Vishnu born to Rishi Atri and Anasuya mata. Shiva.[2] The establishment of the Naths as a distinct historical sect purportedly began around the 8th or 9th century with a simple fisherman, Matsyendranath (sometimes called Minanath, who may be identified with or called the father of Matsyendranath in some sources).[3]

One story of the origin of the Nath teachings is that Matsyendranath was swallowed by a fish and while inside the fish overheard the teachings given by Shiva to his wife Parvati. According to legend, the reason behind Shiva imparting a teaching at the bottom of the ocean was in order to avoid being overheard by others. In the form of a fish, Matsyendranath exerted his hearing in the manner required to overhear and absorb the teachings of Shiva. After being rescued from the fish by another fisherman, Matsyendranath took initiation as a sannyasin from Siddha Carpati. It was Matsyendranath who became known as the founder of the specific stream of yogis known as the Nath Sampradaya.

Matysendranath's two most important disciples were Caurangi and Gorakshanath. The latter came to eclipse his Master in importance in many of the branches and sub-sects of the Nath Sampradaya. Even today, Gorakshanath is considered by many to have been the most influential of the ancient Naths. He is also reputed to have written the first books dealing with Laya yoga and the raising of the kundalini-shakti.[2]

There are several sites, ashrams and temples in India dedicated to Gorakshanatha. Many of them have been built at sites where he lived and engaged in meditation and other sadhanas. According to tradition, his samadhi shrine and gaddi (seat) reside at the Gorakhnath Temple in Gorakhpur. However, Nityananda stated that the samadhi shrines (tombs) of both Matsyendranath and Gorakshanath reside at Nath Mandir near the Vajreshwari temple about a kilometer from Ganeshpuri, Maharashtra, India.[4]

The Natha Sampradaya does not recognize caste barriers, and their teachings were adopted by outcasts and kings alike. The heterodox Nath tradition has many sub-sects, but all honor Matsyendranath and Gorakshanath as the founders of the tradition.

The Natha Sampradaya is traditionally divided into twelve streams or Panths. According to David Gordon White, these panthas were not really a subdivision of a monolithic order, but rather an amalgamation of separate groups descended from either Matsyendranath, Gorakshanath or one of their students.[3] According to the Shri Amrit Nath Ashram website, the twelve Natha Panthi are as follows:

However, there have always been many more Natha sects than will conveniently fit into the twelve formal panths.[3] Thus less populous sannyasin sub-sects such as the Adinath Sampradaya or Nandinatha Sampradaya are typically either ignored or amalgamated into one or another of the formal panths.

Reference to the Adinath Sampradaya is pointed out by Rajmohan Nath (1964) in the following list of the twelve sub-sects:[5]

A recent modern Natha of the Adinath Sampradaya was Shri Gurudev Mahendranath (1911-1991), who received initiation in 1953 from H.H. Shri Sadguru Lokanath, the Avadhut of the Himalayas. In 1978, he founded the International Nath Order in order to make the Natha way of life available in the West. He wrote many essays and articles, some of which were collected as The Scrolls of Mahendranath, first published in 1990. His successor, Shri Kapilnath, continues to teach and initiate sincere seekers.[6]

Some people contradict this, paraphrasing from Shree Nath Deepa-Prakash (Preface ;line14;7th edition) which supposedly contradicts the above statement. On 15th May' 1935 the Padukas of Maharaj were consecrated at Indore temple. On that occasion, he was questioned on appointment of a successor to carry forward the work of Nath Paramapara, he instantly replied "Nobody has given me this position, nor will I leave it for anyone." He further stated that a trust be formed to look after the Nath-Karya. Of course the statement is true, because as per the tradition at Chitrakoot, no presiding Nath ever appoints a successor in his lifetime. The statement by Madhavnath holds true for all Naths who ever graced the Chitrakoot seat, including the current incumbent. So there is no contradiction.[8]

The Natha initiation itself is conducted inside a formal ceremony in which some portion of the awareness and spiritual energy (shakti) of the Guru is transmitted to the shishya (student). The neophyte, now a Nath, is also given a new name with which to support their new identity. This transmission or "touch" of the Guru is symbolically fixed by the application of ash to several parts of the body.

In The Phantastikos, Shri Gurudev Mahendranath, a Guru of the Adinath Sampradaya, wrote,

"The passage of wisdom and knowledge through the generations required the mystic magick phenomenon of initiation, which is valid to this day in the initiation transmission from naked guru to naked novice by touch, mark, and mantra. In this simple rite, the initiator passes something of himself to the one initiated. This initiation is the start of the transformation of the new Natha. It must not be overlooked that this initiation has been passed on in one unbroken line for thousands of years. Once you receive the Nath initiation, it is yours throughout life. No one can take it from you, and you yourself can never renounce it. This is the most permanent thing in an impermanent life."[9]

Indian alchemy (known as Rasayana) and the ritual, spiritual and medicinal usage of mercury, cinnabar and other minerals and crystal preparations and elixirs was a practice of Nath

The aims of the Nathas

According to Muller-Ortega (1989: p.37), the primary aim of the ancient Nath Siddhas was to achieve liberation or jivan-mukti during their current lifespan.[10] According to a recent Nath Guru, Shri Gurudev Mahendranath, another aim was to avoid reincarnation. In The Magick Path of Tantra, he wrote about several of the aims of the Naths,

"Our aims in life are to enjoy peace, freedom, and happiness in this life, but also to avoid rebirth onto this Earth plane. All this depends not on divine benevolence, but on the way we ourselves think and act."[11]

Sonepur literature and the Twilight Language

Nayak (2006: p.72) holds the great fertile locality of Sonepur and its literature which employed the 'Twilight Language' (Sanskrit: sandhya bhasa) is championed by such as the Charyapada, Matsyendranath, Daripada and the Nath:

"The growth of literature at Sonepur can be traced to Charyapada, to Matsyendranath and Daripada of the Natha cult. They wrote esoteric poetry in language known as Sandhya bhasa. The local idioms they used are still in currency in this area."[12]

Nayak (2006: p.72) opines that the mystic poetry of the Natha influenced the Panchasakha literature of Jagannath, Balarama, Yasowanta, Achyuta and Ananta:

"The mystic poetry of the Natha cult which flourished from 8th to 11th century largely influenced the Panchasakha literature of Jagannath, Balarama, Yasowanta, Achuyta and Ananta. The Nath literature of Sonepur seems to have set the tone and temper of the literature the successive ages pursued."[13]

Yogiraj Gurunath Siddhanath, operates from Mother center in Pune and for further details you can visit www.hamsa-yoga.org"