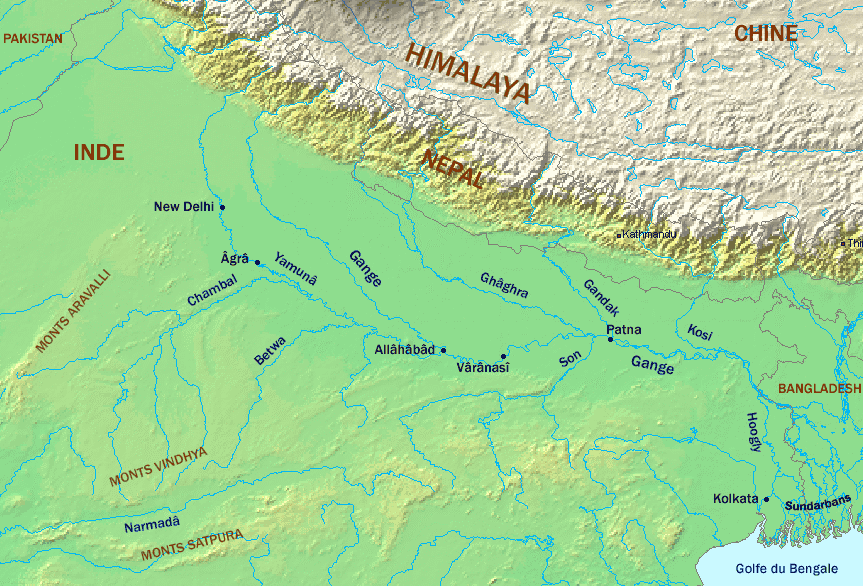 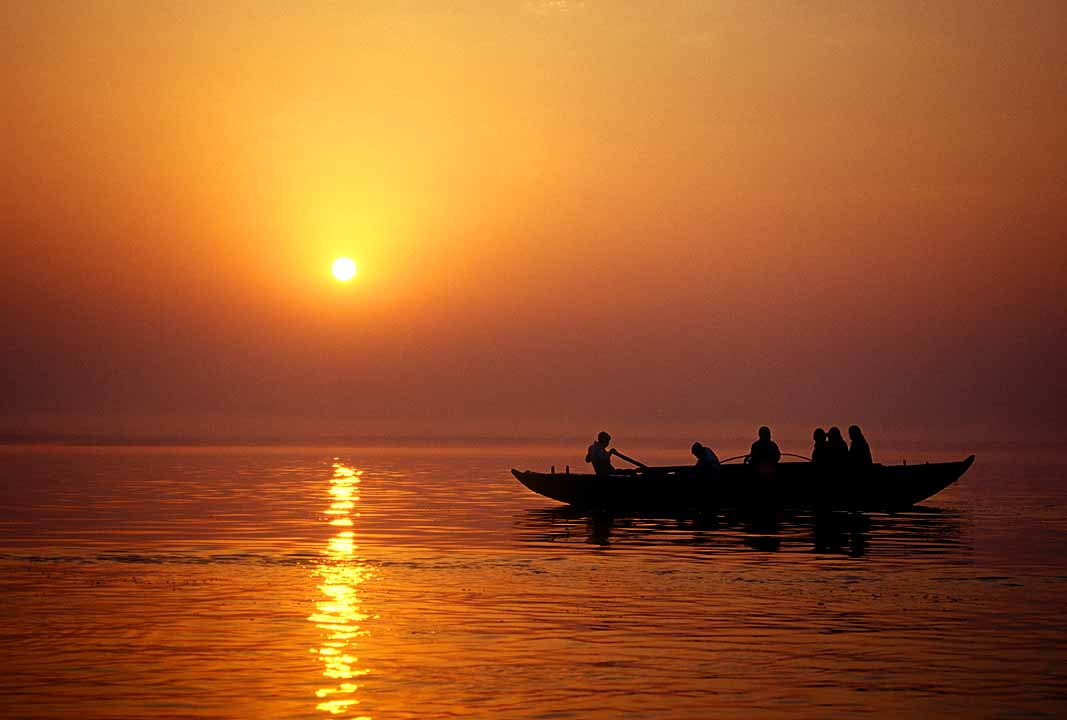 image_size = 250
image_caption = The Ganges in The Ganges (IPAEng|ˈgænʤiːz, also Ganga audio|hi-Ganga.ogg|pronunciation, : _hi. गंगा, IAST1|"Gaṅgā" in most Indian languages) is the major river in the flowing east through the eponymous plains of northern into . The 2,510 km (1,557 mi) river begins at the in the Indian state of , in the central , and drains into the through its vast delta in the . It has enjoyed a position of reverence for millennia among India's Hindus, by whom it is worshipped in its personified form as the goddess "Ganga".

The Ganges and its tributaries drain a largendash about one million square kilometresndash and fertile basin that supports one of the world's highest-density human populations. It should be noted that almost half of the population of India live on one-third of the landscape within 500 km of the n range along the Gangetic plains north of Devanagari.

The Ganges, above all is the river of India, which has held India's heart captive and drawn uncounted millions to her banks since the dawn of history. The story of the Ganges, from her source to the sea, from old times to new, is the story of India's civilization and culture, of the rise and fall of empires, of great and proud cities, of adventures of man…

The "ganga" originates in the after the confluence of six rivers: the Alaknanda meets the Dhauliganga at , the Nandakini at , the Pindar at , the Mandakini at and finally the Bhagirathi at (after which point the river is known as the Ganges) in the Indian state of . The Bhagirathi is considered the source stream; it originates at the , at an elevation of 7,756 m (25,446 ft). The streams are fed by melting snow and ice from glaciers including glaciers from peaks such as and .

After travelling 200 km through the Himalayas, the Ganges emerges at the pilgrimage town of in the . At Haridwar, a dam diverts some of its waters into the , which links the Ganges with its main tributary, the Yamuna. The Ganges, whose course has been roughly southwestern until this point, now begins to flow southeast through the plains of northern India.

Further, the river follows an 800 km curving course passing through the city of before being joined from the southwest by the Yamuna at . This point is known as the . Sangam, is a sacred place in Hinduism. According to ancient Hindu texts, at one time a third river, the Sarasvati, met the other two rivers at this point

Joined by numerous rivers such as the Kosi, Son, Gandaki and Ghaghra, the Ganges forms a formidable current in the stretch between Allahabad and in . On its way it passes the towns of , , and . At Bhagalpur, the river meanders past the , and begins to run south. At , the river begins its attrition with the branching away of its first distributary, the Bhāgirathi-Hooghly, which goes on to form the . Near the border with the , built in , controls the flow of the Ganges, diverting some of the water into a feeder canal linking the Hooghly to keep it relatively silt-free.

After entering , the main branch of the Ganges is known as the until it is joined by the the largest distributary of the . Further downstream, the Ganges is fed by the , the second largest tributary of the Brahmaputra, and takes on the Meghna's name as it enters the . Fanning out into the 350 km wide , it finally empties into the . Only two rivers, the Amazon and the Congo, have greater discharge than the combined flow of the Ganges, the and the Surma-Meghna river system.

Situated on the banks of River Ganges, is considered by some to be the most holy city in Hinduism.The Ganga is mentioned in the Rig-Veda, the earliest of the Hindu scriptures.It appears in the nadistuti (Rig Veda 10.75), which lists the rivers from east to west. In RV 6.45.31, the word Ganga is also mentioned, but it is not clear whether this reference is to the river.According to Hindu religion a very famous king Bhagiratha did for many years constantly to bring the river Ganga, then residing in the , down on the Earth to find salvation for his ancestors, who were cursed by a seer. Therefore, Ganga descended to the Earth through the lock of hair (Jata) of god to make whole earth pious, fertile and wash out the sins of humans. For Hindus in India, the Ganga is not just a river but a mother, a goddess, a tradition, a culture and much more.

According to Hindus the river Ganga (feminine) is sacred. It is worshiped by Hindus and personified as a Devi goddess, who holds an important place in the Hindu religion. Hindu belief holds that bathing in the river (especially on certain occasions) causes the forgiveness of sins and helps attain salvation. Many people believe that this will come from bathing in the Ganga at any time. People travel from distant places to immerse the Cremation and ashes collection ashes of their family / kin in the waters of the Ganga; this immersion also is believed to send the departed soul to heaven. Several places sacred to Hindus lie along the banks of the river Ganga, including Haridwar and Varanasi. People carry sacred water from the Ganges that is sealed in copper pots after making the pilgrimage to Varanasi. It is believed that drinking water from the Ganga with one's last breath will take the soul to heaven.

Some Hindus also believe life is incomplete without bathing in the Ganga at least once in one's lifetime. Some Hindu families keep a vial of water from the Ganga in their house. This is done because it is prestigious to have water of the Holy Ganga in the house, and also so that if someone is dying, that person will be able to drink its water. Many Hindus believe that the water from the Ganga can cleanse a person's soul of all past sins, and that it can also cure the ill. The ancient scriptures mention that the water of Ganges carries the blessings of Lord Vishnu's feet; hence Mother Ganges is also known as "Vishnupadi", which means "Emanating from the Lotus feet of Supreme Lord Sri Vishnu."

Some of the most important Hindu festivals and religious Congregation (worship)happen here.Congregations are celebrated on the banks of the river Ganga, such as the every twelve years at Media:Allahabad and the Chhath Chhat Puja.

Indian Mythology states that Ganga, daughter of Himavan, King of the Mountains, had the power to purify anything that touched her. Ganga flowed from the heavens and purified the people of India, according to myths. After the funeral, Indians often immerse the bodies of their dead in the Ganga, which is believed to purify them of their sins.

During the early Vedic Ages, the Indus and the Sarasvati River were the major rivers, not the Ganges.But the later three Vedas seem to give much more importance to the Ganges, as shown by its numerous references.

Possibly the first Westerner to mention the Ganges was . He did so several times in his work Indika: "India, again, possesses many rivers both large and navigable, which, having their sources in the mountains which stretch along the northern frontier, traverse the level country, and not a few of these, after uniting with each other, fall into the river called the Ganges. Now this river, which at its source is 30 stadia broad, flows from north to south, and empties its waters into the ocean forming the eastern boundary of the Gangaridai, a nation which possesses a vast force of the largest-sized elephants." (Diodorus II.37.)

In Rome's Piazza Navona, a famous sculpture, "Fontana dei Quattro Fiumi" (fountain of the four rivers) designed by Gian Lorenzo Bernini was built in 1651. It symbolizes four of the world's great rivers (the Ganges, the Nile, the Danube, and the Río de la Plata), representing the four continents known at the time..

The Ganges Basin with its fertile soil is instrumental to the agricultural economies of India and Bangladesh. The Ganges and its tributaries provide a perennial source of irrigation to a large area. Chief crops cultivated in the area include rice, sugarcane, lentils, oil seeds, potatoes, and wheat. Along the banks of the river, the presence of swamps and lakes provide a rich growing area for crops such as legumes, chillies, mustard, sesame, sugarcane, and jute. There are also many fishing opportunities to many along the river, though it remains highly polluted.

Tourism is another related activity. Three towns holy to Hinduismndash , , and ndash attract thousands of pilgrims to its waters. Thousands of Hindu pilgrims arrive at these three towns to take a dip in the Ganges, which is believed to cleanse oneself of sins and help attain salvation. The rapids of the Ganges also are popular for river rafting, attracting hundreds of adventure seekers in the summer months.

The Ganges river's long held reputation as a purifying river appears to have a basis in science. The river water has a unique and extraordinary ability to retain oxygen. As reported in a National Public Radio program, and are killed off, preventing large-scale epidemics. The river has unusual ability to retain dissolved oxygen, but the reason for this ability is not known. [Self-purification effect of bacteriophages, oxygen retention mystery: [http://www.npr.org/templates/story/story.php?storyId=17134270 Mystery Factor Gives Ganges a Clean Reputation] by Julian Crandall Hollick. National Public Radio.]

A UN Climate Report issued in 2007 indicates that the Himalayan glaciers that feed the Ganges may disappear by 2030, after which the river's flow would be a seasonal occurrence resulting from s. [ [http://www.boston.com/news/world/asia/articles/2007/06/24/global_warming_threatens_to_dry_up_ganges/ The Boston Globe] ]