The Sarasvati River (Sanskrit: सरस्वती नदी sárasvatī nadī) is one of the chief Rigvedic rivers mentioned in ancient Hindu texts. The Nadistuti hymn in the Rigveda (10.75) mentions the Sarasvati between the Yamuna in the east and the Sutlej in the west, and later Vedic texts like Tandya and Jaiminiya Brahmanas as well as the Mahabharata mention that the Sarasvati dried up in a desert. The goddess Sarasvati was originally a personification of this river, but later developed an independent identity and gained meaning.

The identification of the Vedic Sarasvati River with the Ghaggar-Hakra River was accepted by Christian Lassen,[1] Max Müller,[2] Marc Aurel Stein, C.F. Oldham[3] and Jane Macintosh.[4]

Sarasvatī is the Devi feminine of an adjective sarasvant- (which occurs in the Rigveda[5] as the name of the keeper of the celestial waters), derived from Proto-Indo-Iranian sáras-wn̥t-iH (and earlier, PIE *séles-wn̥t-ih2), meaning "with (many) pools".

Sarasvatī is cognate to Avestan *Haraxwaitī, which has been speculated[8] to refer to Arədvī Sūrā Anāhitā, the Avestan mythological world river, which would point to an already Proto-Indo-Iranian myth of a cosmic or mystical *Sáras-vn̥t-iH River. In the younger Avesta, Haraxwaitī is identified with a region described to be rich in rivers, and the Old Persian cognate Hara[h]uvatiš was the name of area of the Afghani Helmand (*Setumant) river, the origin of the Greek name Arachosia.

The Sarasvati River is mentioned in all books of the Rigveda but not in the fourth one.

Like two bright mother cows who lick their youngling,
Vipas and Sutudri speed down their waters.

Citra is King, and only kinglings [rājaka] are the rest who dwell beside Sarasvati.

This stream Sarasvati with fostering current comes forth, our sure defence, our fort of iron.
As on a chariot, the flood flows on, surpassing in majesty and might all other waters.
Pure in her course from mountains to the ocean, alone of streams Sarasvati hath listened.
Thinking of wealth and the great world of creatures, she poured for Nahusa her milk and fatness. 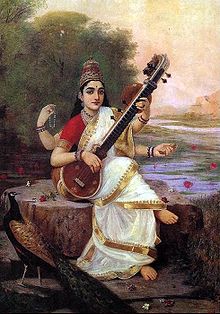 In the Rigveda, the name Sarasvati already does not always relate to a river and its personification exclusively; in some places, the goddess Saraswati is abstracted from the river.

The Sarasvati is mentioned in 13 hymns of the late books (1 and 10) of the Rigveda.[11] Only two of these references are unambiguously to the river: 10.64.9, calling for the aid of three "great rivers", Sindhu, Sarasvati and Sarayu; and 10.75.5, the geographical list of the Nadistuti sukta. The others invoke Sarasvati as a goddess without direct connection to a specific river. In 10.30.12, her origin as a river goddess may explain her invocation as a protective deity in a hymn to the celestial waters. In 10.135.5, as Indra drinks Soma he is described as refreshed by Sarasvati. The invocations in 10.17 address Sarasvati as a goddess of the forefathers as well as of the present generation. In 1.13, 1.89, 10.85, 10.66 and 10.141, she is listed with other gods and goddesses, not with rivers. In 10.65, she is invoked together with "holy thoughts" (dhī) and "munificence" (puraṃdhi), consistent with her role as a goddess of both knowledge and fertility.

In a supplementary chapter of the Vajasaneyi-Samhita of the Yajurveda (34.11), Sarasvati is mentioned in a context apparently meaning the Sindhu: "Five rivers flowing on their way speed onward to Sarasvati, but then become Sarasvati a fivefold river in the land."[14] According to the medieval commentator Uvata, the five tributaries of the Sarasvati were the Punjab rivers Drishadvati, Satudri (Sutlej), Chandrabhaga (Chenab), Vipasa (Beas) and the Iravati (Ravi).

The first reference to the disapparance of the lower course of the Sarasvati is from the Brahmanas, texts that are composed in Vedic Sanskrit, but dating to a later date than the Veda Samhitas. The Jaiminiya Brahmana (2.297) speaks of the 'diving under (upamajjana) of the Sarasvati', and the Tandya Brahmana (or Pancavimsa Br.) calls this the 'disappearance' (vinasana). The same text (25.10.11-16) records that the Sarasvati is 'so to say meandering' (kubjimati) as it could not sustain heaven which it had propped up.[15] The Plaksa Prasravana (place of appearance/source of the river) may refer to a spring in the Siwalik mountains. The distance between the source and the Vinasana (place of disappearance of the river) is said to be 44 asvina (between several hundred and 1600 miles) (Tandya Br. 25.10.16; cf. Av. 6.131.3; Pancavimsa Br.[16]

According to the Mahabharata, the Sarasvati dried up in a desert (at a place named Vinasana or Adarsana);[17] after having disappeared in the desert, reappears in some places;[18] and joins the sea "impetuously".[19] MB.3.81.115 locates Kurukshetra to the south of the Sarasvati and north of the Drishadvati. Dried up seasonal Ghaggar River in Rajasthan and haryana reflects the same geographical view as described in Mahabharata.

The Sarasvati River of late Vedic and post-Vedic times is generally identified with the Ghaggar River. But the implication of a river of substantially greater volume makes the same identification of the early Vedic references problematic: either the Ghaggar was a more powerful river in earlier times, or the early Vedic Sarasvati was located elsewhere[citation needed].

Evidence from survey fieldwork and recent satellite imagery have been adduced to suggest that the Ghaggar-Hakra system in the undetermined past had the Sutlej and the Yamuna as tributaries, with the Rann of Kutch as the likely remains of its delta. In this scenario, geological changes diverted the Sutlej towards the Indus and the Yamuna towards the Ganges, following which the river did not have enough water to reach the sea any more and dried up in the Thar desert. It has been proposed that the Sarasvati of the early Rigveda corresponds to the Ghaggar-Hakra before these changes took place (the "Old Ghaggar"), and the late Vedic end Epic Sarasvati disappearing in the desert to the Ghaggar-Hakra following the diversion of Sutlej and Yamuna.

The wide river bed (paleo-channel) of the Ghaggar river suggest that the river once flowed full of water during the great meltdown of the Himalayan Ice Age glaciers, some 10,000 years ago, and that it then continued through the entire region, in the presently dry channel of the Hakra River, possibly emptying into the Rann of Kutch. It supposedly dried up due to the capture of its tributaries by the Indus system and the Yamuna river, and later on, additionally, the loss of water in much of its catchment area due to deforestation and overgrazing.[23] This is supposed by some to have happened at the latest in 1900 BCE [24][25]

Painted Grey Ware sites (ca. 1000 BCE) have been found in the bed and not on the banks of the Ghaggar-Hakra river, suggesting that the river had dried up before this period.[26]

Suggestions for the identity of the early Rigvedic Sarasvati River include the Helmand River in Afghanistan, separated from the watershed of the Indus by the Sanglakh Range. The Helmand historically besides Avestan Haetumant bore the name Haraxvaiti, which is the Avestan form cognate to Sanskrit Sarasvati. The Avesta extols the Helmand in similar terms to those used in the Rigveda with respect to the Sarasvati: "the bountiful, glorious Haetumant swelling its white waves rolling down its copious flood".[27]

Kocchar (1999) argues that the Helmand is identical to the early Rigvedic Sarasvati of suktas 2.41, 7.36 etc., and that the Nadistuti sukta (10.75) was composed centuries later, after an eastward migration of the bearers of the Rigvedic culture to the western Gangetic plain some 600 km to the east. The Sarasvati by this time had become a mythical "disappeared" river, and the name was transferred to the Ghaggar which disappeared in the desert.

The identification of the Helmand with the early Rig Vedic Sarasvati is not without difficulties. However, the geographic situation of the Sarasvati and the Helmand rivers are similar. Both flow into a terminal lakes: the Helmand into a swamp in the Iranian plateau (the extended wetland and lake system of Hamun-i-Helmand). This matches the Rigvedic description of the Sarasvati flowing to the samudra, which at that time meant 'confluence', 'lake', 'heavenly lake, ocean'; the current meaning of 'terrestrial ocean' was not even felt in the Pali Canon.[28] In post-Rig Vedic texts (Brahmanas) the Sarasvati ("she who has (many) lakes"), is said to disappear ("dive under") in the desert.