All mtDNA haplogroups found outside of Africa are descendants of either haplogroup N or its sibling haplogroup M. M and N are the signature haplogroups that define the out of Africa migration and the subsequent spread to rest of the world. The global distribution of haplogroups N and M, indicates that very likely, there was one particularly major prehistoric migration of humans out of Africa, and both N and M were part of the same colonization process.[13] 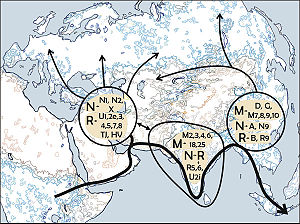 Suggested routes of the initial settlement of Europe based on mtDNA haplogroups M and N, Metspalu et al. 2004. A major population split near the Persian Gulf would explain the ubiquity of Haplogroup N and the absence of Haplogroup M in West Eurasia

There is widespread agreement in the scientific community concerning the African ancestry of haplogroup L3 (haplogroup N's parent clade).[8] However, whether or not the mutations which define haplogroup N itself first occurred within Asia or Africa has been a subject for ongoing discussion and study.[8]

The out of Africa hypothesis has gained generalized consensus. However, many specific questions remain unsettled. To know whether the two M and N macrohaplogroups that colonized Eurasia were already present in Africa before the exit is puzzling.

Also related to the origins of haplogroup N is whether ancestral haplogroups M, N and R were part of the same migration out of Africa, or whether Haplogroup N left Africa via the Northern route through the Levant, and M left Africa via Horn of Africa. This theory was suggested because haplogroup N is by far the predominant haplogroup in Western Eurasia, and haplogroup M is absent in Western Eurasia, but is predominant in India and is common in regions East of India. However, the mitochondrial DNA variation in isolated "relict" populations in southeast Asia and among Indigenous Australians supports the view that there was only a single dispersal from Africa. Southeast Asian populations and Indigenous Australians all possess deep rooted clades of both haplogroups M and N.[13] The distribution of the earliest branches within haplogroups M, N, and R across Eurasia and Oceania therefore supports a three-founder-mtDNA scenario and a single migration route out of Africa.[15] These findings also highlight the importance of Indian subcontinent in the early genetic history of human settlement and expansion.[16]

The hypothesis of Asia as the place of origin of haplogroup N is supported by the following:

According to Toomas Kivisild "the lack of L3 lineages other than M and N in India and among non-African mitochondria in general suggests that the earliest migration(s) of modern humans already carried these two mtDNA ancestors, via a departure route over the Horn of Africa.[10]

Haplogroup N is derived from the ancestral L3 haplotype that represents the 'Out of Africa' migration. Haplogroup N is the ancestral haplogroup to almost all European and Oceanian haplogroups in addition to many Asian and Amerindian ones. It is believed to have arisen at a similar time to haplogroup M. Subclades such as Haplogroup U6, are also found at moderate to low frequencies in the Northwest and East Africa, due to a back migration from Asia around 35,000 years ago.[1][3][6]

In the book The Real Eve, Stephen Oppenheimer refers to haplogroup N as "Nasreen" as haplogroup N may have arisen near the Persian Gulf. In his popular book The Seven Daughters of Eve, Bryan Sykes named the originator of this mtDNA haplogroup "Naomi".

Additionally there are several unnamed N* lineages in South Asia, Australia and among the Ket people of central Siberia.[18]