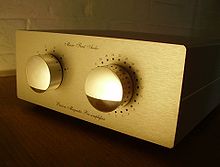 An example of a typical high-end stereo preamplifier.

In general, the function of a preamplifier is to amplify a low-level signal to line-level. A list of common low-level signal sources would include a pickup, microphone, turntable or other transducers. Equalization and tone control may also be applied.

In a home audio system, the term 'preamplifier' may sometimes be used to describe equipment which merely switches between different line level sources and applies a volume control, so that no actual amplification may be involved. In an audio system, the second amplifier is typically a power amplifier (power amp). The preamplifier provides voltage gain (e.g. from 10 millivolts to 1 volt) but no significant current gain. The power amplifier provides the higher current necessary to drive loudspeakers.