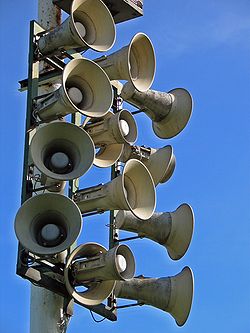 A public address system (PA system) is an electronic amplification system with a mixer, amplifier and loudspeakers, used to reinforce a sound source, e.g., a person giving a speech, a DJ playing prerecorded music, and distributing the sound throughout a venue or building.

Simple PA systems are often used in small venues such as school auditoriums, churches, and small bars. PA systems with a larger number of speakers are widely used in institutional and commercial buildings, to read announcements or declare states of emergency. Intercom systems, which are often used in schools, also have microphones in each room so that the occupants can reply to the central office.

Sound reinforcement systems and PA systems may use some similar components, but with differing application. Sound reinforcement systems are for live music or performance, whereas PA systems are for reproduction of speech and recorded music in buildings and institutions.[1][not in citation given] In colloquial British English, a PA system installed for public address in a building is sometimes referred to as a Tannoy system after the company of that name now owned by TC Electronic Group.[2] Public address system in a school

The simplest PA systems consist of a microphone, a modestly powered mixer amplifier and one or more loudspeakers. Simple PA systems of this type, often providing 50 to 200 watts of power, are often used in small venues such as school auditoriums, churches, and small bars. A sound source such as a CD player or radio may be connected to a PA system so that music can be played through the system.

Public address systems typically consist of input sources, preamplifiers and/or signal routers, amplifiers, control and monitoring equipment, and loudspeakers. Input sources refer to the microphones and CD Players that provide a sound input for the system. These input sources are fed into the preamplifiers and signal routers that determine the zones to which the audio signal is fed. The preamplified signals are then passed into the amplifiers. Depending on a country's regulations these amplifiers will amplify the audio signals to 50V, 70V or 100V speaker line level. Control equipment monitors the amplifiers and speaker lines for faults before it reaches the loudspeakers. This control equipment is also used for separating zones in a PA system. The loudspeaker is used to transduce electrical signals into analog sound signals. 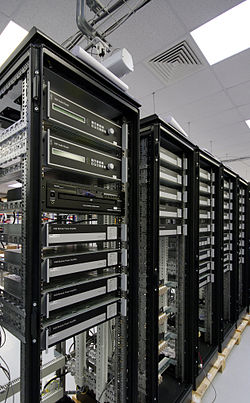 Some PA systems have speakers that cover an entire campus of a college or industrial site, or an entire outdoor complex (e.g., an athletic stadium). More than often this PA system will be used as voice alarm system that make announcement during emergency to evacuate the occupants in a building.

Many retailers and offices choose to use the telephone system as the sole access point for the paging system, because the features are integrated. Many schools and other larger institutions are no longer using the large, bulky microphone PA systems and have switched to telephone system paging, as it can be accessed from many different points in the school.

PA over IP refers to PA paging and intercom systems that use an Ethernet or GSM-R network instead of a centralized amplifier to distribute the audio signal to all paging locations in a building or campus. Network-attached amplifiers and intercom units are used to provide the communication function. At the transmission end, a computer application transmits a digital audio stream via the local area network, using audio from the computer's sound card inputs or from stored audio recordings. At the receiving end, specialized intercom modules (sometimes known as IP speakers) receive these network transmissions and reproduce the analog audio signal. These are small specialized network appliances addressable by an IP address just like any other computer on the network.[3]

Such systems are inter-connected by the networking infrastructure and thus allow loss less transmission to remote locations across the Internet or a local area or campus network. It is also possible to provide for multiple or relocatable transmission control stations on such a network. 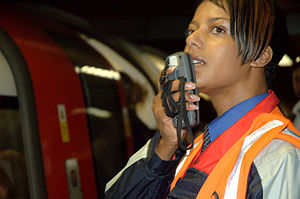 A Long-line public address (LLPA) system is any public address system with a distributed architecture, normally across a wide geographic area. Systems of this type are commonly found in the rail, light rail and metro industries and allow announcements to be triggered from one or several locations to the rest of the network over low bandwidth legacy copper, normally PSTN lines using DSL modems, or media such as optical fiber, or GSM-R, or IP-based networks.[4]

Rail systems typically have an interface with a passenger information system (PIS) server, at each station linked to train describers which state the location of rolling stock on the network from sensors on trackside signaling equipment. The PIS system invokes a stored message to be played from a local or remote digital voice announcement system, or a series of message fragments to be assembled in the correct order, for example: / the / 13.29 / Virgin_Trains / sleeper_service / from / London_Paddington / to / Penzance / .... / will depart from platform / five / this train is formed of / 12_carriages /. Messages are routed via an IP network and are played on local amplification equipment. Taken together, the PA, routing, DVA, passenger displays and PIS interface are referred to as the customer information system (CIS), a term which itself is often used interchangeably with passenger information system.[citation needed] Touring bands will source a large line-array PA system from an audio equipment hire company with reliable service to take from venue to venue along with various other equipment such as lighting and projection. PA hire companies typically will provide "sound solutions" for myriad purposes. Local companies may specialise in small systems tailored to clubs, pubs and small outdoor events whereas larger companies will cater for concert halls.

For popular music concerts, a more powerful and more complicated PA System is used to provide live sound reproduction. In a concert setting, there are typically two complete PA systems: the "main" system and the "monitor" system. Each system consists of microphones, a mixing board, sound processing equipment, amplifiers, and speakers.

At a concert in which live sound reproduction is being used, sound engineers and technicians control the mixing boards for the "main" and "monitor" systems, adjusting the tone, levels, and overall volume of the performance.

All PA systems have a potential for audio feedback, which occurs when sound from the speakers returns to the microphone and is then re-amplified and sent through the speakers again. Sound engineers take several steps to maximize gain before feedback, including ensuring that directional microphones are not pointed towards speakers, keeping the onstage volume levels down, and lowering gain levels at frequencies where the feedback is occurring, using a graphic equalizer, a parametric equalizer, or a notch filter.