A sound wave, in gray, represented digitally, in red (after quantization and zero-order hold). 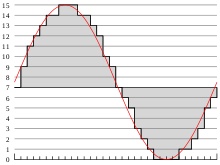 Digital audio has emerged because of its usefulness in the recording, manipulation, mass-production, and distribution of sound. Modern distribution of music across the Internet via on-line stores depends on digital recording and digital compression algorithms. Distribution of audio as data files rather than as physical objects has significantly reduced the cost of distribution.

In an analog audio system, sounds begin as physical waveforms in the air, are transformed into an electrical representation of the waveform, via a transducer (for example, a microphone), and are stored or transmitted. To be re-created into sound, the process is reversed, through amplification and then conversion back into physical waveforms via a loudspeaker. Although its nature may change, analog audio's fundamental wave-like characteristics remain the same during its storage, transformation, duplication, and amplification.

Analog audio signals are susceptible to noise and distortion, unavoidable due to the innate characteristics of electronic circuits and associated devices. In the case of purely analog recording and reproduction, numerous opportunities for the introduction of noise and distortion exist throughout the entire process. When audio is digitized, distortion and noise are introduced only by the stages that precede conversion to digital format, and by the stages that follow conversion back to analog.

The digital audio chain begins when an analog audio signal is first sampled, and then (for pulse-code modulation, the usual form of digital audio) it is converted into binary signals—‘on/off’ pulses—which are stored as binary electronic, magnetic, or optical signals, rather than as continuous time, continuous level electronic or electromechanical signals. This signal may then be further encoded to allow correction of any errors that might occur in the storage or transmission of the signal, however this encoding is for error correction, and is not strictly part of the digital audio process. This "channel coding" is essential to the ability of broadcast or recorded digital system to avoid loss of bit accuracy. The discrete time and level of the binary signal allow a decoder to recreate the analog signal upon replay. An example of a channel code is Eight to Fourteen Bit Modulation as used in the audio Compact Disc (CD).

The lifecycle of sound from its source, through an ADC, digital processing, a DAC, and finally as sound again.

A digital audio system starts with an ADC that converts an analog signal to a digital signal.[note 1] The ADC runs at a sampling rate and converts at a known bit resolution. For example, CD audio has a sampling rate of 44.1 kHz (44,100 samples per second) and 16-bit resolution for each channel. For stereo there are two channels: 'left' and 'right'. If the analog signal is not already bandlimited then an anti-aliasing filter is necessary before conversion, to prevent aliasing in the digital signal. (Aliasing occurs when frequencies above the Nyquist frequency have not been band limited, and instead appear as audible artifacts in the lower frequencies).

The digital audio signal may be stored or transmitted. Digital audio storage can be on a CD, a digital audio player, a hard drive, USB flash drive, CompactFlash, or any other digital data storage device. The digital signal may then be altered in a process which is called digital signal processing where it may be filtered or have effects applied. Audio data compression techniques — such as MP3, Advanced Audio Coding, Ogg Vorbis, or FLAC — are commonly employed to reduce the file size. Digital audio can be streamed to other devices.

The last step is for digital audio to be converted back to an analog signal with a DAC. Like ADCs, DACs run at a specific sampling rate and bit resolution but through the processes of oversampling, upsampling, and downsampling, this sampling rate may not be the same as the initial sampling rate.

History of digital audio use in commercial recording

The BBC also began experimenting with digital audio in the 1960s. By the early 1970s they had developed a 2-channel recorder and in 1972 they deployed a digital audio transmission system linking their broadcast center to their remote transmitters.[2]

The first 16-bit PCM recording in the United States was made by Thomas Stockham at the Santa Fe Opera in 1976 on a Soundstream recorder. In 1978, an improved version of the Soundstream system was used by Telarc to produce several classical recordings. At the same time 3M was well along in development of their digital multitrack recorder based on BBC technology. The first all-digital album recorded on this machine was Ry Cooder's "Bop 'Til You Drop" which was released in 1979. In a crash program started in 1978, British record label Decca developed their own 2-track digital audio recorders. Decca released the first European digital recording in 1979.[2]

Helped along by introduction of popular digital multitrack recorders from Sony and Mitsubishi in the early 1980s, digital recording was soon embraced by the major record companies. With the introduction of the CD by Sony and Philips in 1982, digital audio was embraced by consumers as well.[2]

Naturally, any digital bus (e.g., USB, FireWire, and PCI) can carry digital audio. Also, several interfaces are engineered to carry digital video and audio together, including HDMI and DisplayPort.