Brassicaceae, a medium sized and economically important family of flowering plants (Angiosperms), are informally known as the mustards, mustard flowers, the crucifers or the cabbage family.

The name Brassicaceae is derived from the included genus Brassica. Cruciferae, an older name, meaning "cross-bearing", describes the four petals of mustard flowers, which are reminiscent of a cross. It is one of eight plant family names that has an accepted alternative name that does not bear the suffix -aceae. According to ICBN Art. 18.5 (Vienna Code) both Cruciferae and Brassicaceae are regarded as validly published.

The family contains over 330 genera and about 3,700 species, according to the Royal Botanic Gardens, Kew. The largest genera are Draba (365 species), Cardamine (200 species, but its definition is controversial), Erysimum (225 species), Lepidium (230 species) and Alyssum (195 species.)

The family is cosmopolitan, but is concentrated in the northern temperate regions and reaches maximal diversity around the Mediterranean area.

The family is included in Brassicales according to the APG system. Older systems (e.g. Arthur Cronquist's) placed them into the Capparales, a now defunct order which had a similar definition.

A close relationship has long been acknowledged between Brassicaceae and the caper family, Capparaceae, in part because members of both groups produce glucosinolate (mustard oil) compounds. Recent research (Hall et al. 2002) suggests that Capparaceae as traditionally circumscribed are paraphyletic with respect to Brassicaceae, with Cleome and several related genera being more closely related to Brassicaceae than to other Capparaceae. The APG II system therefore has merged the two families under the name 'Brassicaceae'. Other classifications have continued to recognize Capparaceae but with a more restricted circumscription, either including Cleome and its relatives in Brassicaceae or recognizing them in the segregate family Cleomaceae. The angiosperm phylogeny website, has recently adopted this last solution, but this may change as a consensus arises on this point. This article deals with Brassicaceae sensu stricto, i.e. treating Cleomaceae and Capparaceae as segregate families. 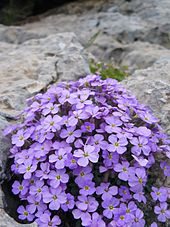 Aubrieta deltoidea (commonly known as purple rock cress) is a perennial wild flower that is used in gardening for its ornamental large inflorescence.

The family consists mostly of herbaceous plants with annual, biennial or perennial lifespans. However, around the Mediterranean they include also a dozen woody shrubs 1m - 3m tall, e.g. in northern Africa (Zilla spinosa and Ptilotrichum spinosum), in the Dalmatian islands (Dendralyssum and Cramboxylon), and chiefly in Canarias with some woody cruciferous genera: Dendrosinapis, Descurainia, Parolinia, Stanleya, etc..

The leaves are alternate (rarely opposite), sometimes organized in basal rosettes; in rare shrubby crucifers of Mediterranean their leaves are mostly in terminal rosettes, and may be coriaceous and evergreen. They are very often pinnately incised and do not have stipules.

The structure of the flowers is extremely uniform throughout the family. They have four free saccate sepals and four clawed free petals, staggered. They can be disymmetric or slightly zygomorphic, with a typical cross-like arrangement (hence the name 'Cruciferae'). They have six stamens, four of which are longer (as long as the petals, so relatively short in fact) and are arranged in a cross like the petals and the other two are shorter (tetradynamous flower). The pistil is made up of two fused carpels and the style is very short, with two lobes. Superior ovary. The flowers form ebracteate racemose inflorescences, often apically corymb-like.

Pollination occurs by entomogamy, nectar is produced at the base of the stamens and stored on the sepals. 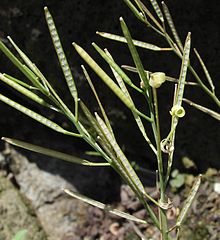 The fruit is a peculiar kind of capsule named siliqua (plural siliquae, American English silique/siliques). It opens by two valves, which are the modified carpels, leaving the seeds attached to a framework made up of the placenta and tissue from the junction between the valves (replum). There is often an indehiscent beak at the top of the style and one or more seeds may be borne there. Where a siliqua is less than three times as long as it is broad, it is usually termed a silicula. The siliqua may break apart at constrictions occurring between the segments of the seeds, thus forming a sort of loment (e.g. Raphanus), it may eject the seeds explosively (e.g. Cardamine) or may be evolved in a sort of samara (e.g. Isatis). Unsurprisingly the fruit is often the most important diagnostic character for plants in this family.

Brassicaceae do not form mycorrhizae, although rare exceptions do exist.

Most members share a suite of glucosinolate compounds that has a typical pungent odour usually associated with cole crops. 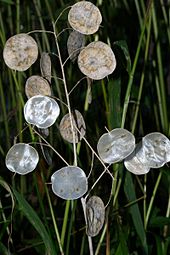 The importance of this family for food crops has led to its selective breeding throughout history. Some examples of cruciferous food plants are the cabbage, broccoli, cauliflower, turnip, rapeseed, mustard, radish, horseradish, cress, wasabi and watercress.

Matthiola (stock), Cheiranthus, Alyssum and Iberis (candytufts) are appreciated for their flowers. Lunaria (honesty) is cultivated for the decorative value of the translucent repulum of the round silicula that remains on the dried stems after dehiscence.

Capsella bursa-pastoris, Lepidium and many Cardamine are common weeds.

Isatis tinctoria (woad) was used in the past to produce the colour indigo.

Arabidopsis thaliana is a very important model organism in the study of the flowering plants (Angiospermae).