Isatis tinctoria
"Woad" redirects here. For the American radio station, see WOAD (AM). For 'Woads' as a fictional name for a tribe[1], see Picts.

/ˈwoʊd/; or glastum) as the common name, is a flowering plant in the family Brassicaceae. It is commonly called dyer's woad, and sometimes incorrectly listed as Isatis indigotica (a newer and invalid name for the same plant)[citation needed]. It is occasionally known as Asp of Jerusalem. Woad is also the name of a blue dye produced from the leaves[2] of the plant.

Woad is native to the steppe and desert zones of the Caucasus, Central Asia to eastern Siberia and Western Asia (Hegi), but is now found in southeastern and some parts of Central Europe as well. Long important as a source of blue dye, it has been cultivated throughout Europe, especially in Western and southern Europe, since ancient times. In medieval times there were important woad growing regions in England, Germany and France, and towns such as Toulouse became prosperous on the woad trade. Woad was eventually replaced by the stronger indigo and then by synthetic indigoes.

The first archaeological finds of woad seeds date to the Neolithic and have been found in the French cave of l'Audoste, Bouches-du-Rhône (France). Named Färberwaid (Isatis tinctoria L.) or German Indigo, of the plant family (Brassicaceae), in the Iron Age settlement of the Heuneburg, Germany, impressions of the seeds have been found on pottery. The Hallstatt burials of Hochdorf and Hohmichele contained textiles dyed with Färberwaid (woad dye). 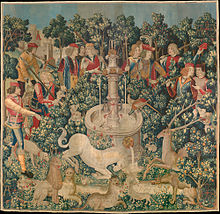 The Hunt of the Unicorn Tapestry, dyed with weld (yellow), madder (red), and woad (blue). 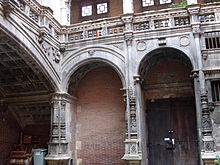 Julius Caesar tells us (in De Bello Gallico) that the Britanni used to colour their bodies blue with vitrum, a word that roughly translates to "glass". While many have assumed vitrum or vitro refers to woad, and this misconception was probably repeated for political reasons,[7] it is probable that Caesar was describing some form of copper- or iron-based pigment.[7] The northern inhabitants of Britain came to be known as Picts (Picti), which means "painted ones" in Latin, and may have been due to these accounts of them painting or tattooing their bodies. 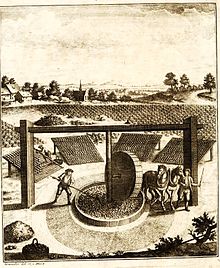 Woad was one of the three staples of the European dyeing industry, along with weld (yellow) and madder (red).[8] Chaucer, mentions them, lamenting their use by the dyer ("litestere") in his poem The Former Age:[9]

No mader, welde, or wood no litestere.
Ne knew; the flees was of his former hewe

The three can be seen together in tapestries such as The Hunt of the Unicorn (1495–1505), though typically it is the dark blue of the woad that has lasted best.

In Viking age levels at York, a dye shop with remains of both woad and madder dating from the 10th century have been excavated. In Medieval times, centres of woad–cultivation lay in Lincolnshire and Somerset in England, Jülich and the Erfurt area in Thuringia in Germany, Piedmont and Tuscany in Italy, and Gascogne, Normandy, the Somme Basin (from Amiens to Saint-Quentin), Britany and above all Languedoc in France. This last region, in the triangle between Toulouse, Albi and Carcassonne, was for long the most productive of woad, or "pastel" as it was known there, one writer commenting that "woad... hath made that country the happiest and richest in Europe."[8] The prosperous woad merchants of Toulouse displayed their affluence in splendid mansions, many of which are still standing. One, Jean de Bernuy, a Spanish Jew who had fled the inquisition, was credit-worthy enough to be the main guarantor of the ransomed King Francis I after his capture at the Battle of Pavia by Charles V of Spain.[8] Much of the woad produced here was used for the cloth industry in southern France,[10] but it was also exported via Bayonne, Narbonne and Bordeaux to Flanders, the Low Countries, Italy, and above all Britain and Spain.

A major market for woad was at Görlitz in Silesia.[11] The citizens of the five Thuringian Färberwaid (dye woad) towns of Erfurt, Gotha, Tennstedt, Arnstadt and Langensalza had their own charters. In Erfurt, the woad-traders gave the funds to found the University of Erfurt. Traditional fabric is still printed with woad in Thuringia, Saxony and Lusatia today: it is known as Blaudruck (literally, "blue print(ing)").

Medieval uses of the dye were not limited to textiles. For example, the illustrator of the Lindisfarne Gospels used a woad-based pigment for blue paint. 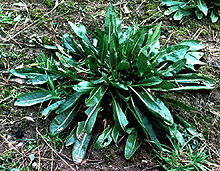 Woad plants in their first year

The dye chemical extracted from woad is indigo, the same dye extracted from "true indigo", Indigofera tinctoria, but in a lower concentration. With the European discovery of the seaway to India, great amounts of indigo were imported. Laws were passed in some parts of Europe to protect the woad industry from the competition of the indigo trade. Indigo was proclaimed to rot the yarns as well. "In 1577 the German government officially prohibited the use of indigo, denouncing it as that pernicious, deceitful and corrosive substance, the Devil's dye."[12] "... a recess of the Diet held in 1577 prohibited the use of 'the newly-invented, deceitful, eating and corrosive dye called the devil's dye.'" This prohibition was repeated in 1594 and again in 1603.[13] In France, Henry IV, in an edict of 1609, forbade under pain of death the use of "the false and pernicious Indian drug".[14]

With the development of a chemical process to synthesize the pigment, both the woad and natural indigo industries collapsed in the first years of the 20th century. The last commercial harvest of woad until recent times occurred in 1932, in Lincolnshire, Britain. Small amounts of woad are now grown in UK and France to supply craft dyers.[15] The classic book about woad is The Woad Plant and its Dye by J. B. Hurry, Oxford University Press of 1930, which contains an extensive bibliography.[16]

In Germany, there are attempts to use woad to protect wood against decay without dangerous chemicals. Production is also increasing again in the UK for use in inks, particularly for inkjet printers, and dyes, as woad is biodegradable and safe in the environment, unlike many synthetic inks. The plant's presence has its problem however since Isatis tinctoria is viewed as an invasive species in parts of the United States.

Indigowoad Root (Chinese: 板藍根; pinyin: bǎn lán gēn) is a traditional Chinese medicine herb that comes from the roots of woad, but often incorrectly listed under the synonymic name, Isatis indigotica. It is also known as Radix isatidis. The herb is cultivated in various regions of northern China, namely Hebei, Beijing, Heilongjiang, Henan, Jiangsu, and Gansu. The roots are harvested during the autumn and dried. The dried root is then processed into granules, which are most commonly consumed dissolved in hot water or tea. The product, called Banlangen Keli, is very popular throughout China, and used to remove toxic heat, soothe sore throat and to treat influenza, measles, mumps, syphilis, or scarlet fever. It is also used for pharyngitis, laryngitis, erysipelas, and carbuncle, and to prevent hepatitis A, epidemic meningitis, cancer and inflammation. Possible minor side effects include allergic reactions and dizziness; only large dosages or long term usage can be toxic to the kidneys. These treatments have not generally been evaluated clinically.

In certain locations the plant is classified as non-native and invasive weed. It is listed as a noxious weed by the agriculture departments of several states in the western United States.[21][22] In Montana, it has been the target of an extensive, and largely successful, eradication attempt.[23]