Cruciferous vegetables
This article is about the use of Brassicaceae as food. For a botanical description of plants in this family (whether or not used for food), see Brassicaceae. 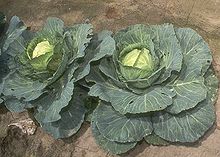 Vegetables of the family Brassicaceae (also called Cruciferae) are called cruciferous vegetables. The vegetables are widely cultivated, with many genera, species, and cultivars being raised for food production such as cauliflower, cabbage, cress, bok choy, broccoli and similar green leaf vegetables. The family takes its alternate name (Cruciferae, New Latin for "cross-bearing") from the shape of their flowers, whose four petals resemble a cross.

Ten of the most common vegetables eaten by people are in a single species (B. oleracea), and are not distinguished from one another taxonomically, but only by the horticultural category of cultivar groups. Numerous other genera and species in the family are also edible. Cruciferous vegetables are one of the dominant food crops worldwide. Widely considered to be healthy foods, they are high in vitamin C and soluble fibre and contain multiple nutrients and phytochemicals with potential anti-cancer properties: diindolylmethane, sulforaphane and selenium. Both diindolylmethane, sulforaphane, and many other sharp-tasting substances in these vegetables are produced from substances called glucosinolates.

Researchers at the University of California, Berkeley, have discovered that 3,3'-diindolylmethane in Brassica vegetables is a strong androgen receptor antagonist in human prostate cancer cells.[1]

Cruciferous vegetables can potentially be goitrogenic (inducing goiter formation). They contain enzymes that interfere with the formation of thyroid hormone.[2][3] Cooking for 30 minutes significantly reduces the amount of goitrogens and nitriles. At high intake of crucifers, the goitrogens inhibit the incorporation of iodine into thyroid hormone and also the transfer of iodine into milk by the mammary gland.[4]

Cruciferous vegetables have recently been implicated in some pharmacological drug interactions. These vegetables are powerful inducers of the microsomal cytochrome P450 enzyme CYP1A2, which is responsible for the metabolism of many pharmacological agents.[5] By causing induction of the enzyme, it may incidentally increase the rate of phase I transformations (see pharmacokinetics) of pharmocological agents that are normally metabolized by this enzyme, expediting the process of drug metabolism. This, in turn, could produce drug plasma concentration that is less than the desired therapeutic range.

It has been found that cruciferous vegetables are less likely to be eaten by people who can taste PTC,[6] due to the existence of compounds related to PTC in such vegetables.

Extensive selective breeding has produced a large variety of cultivars, especially within the genus Brassica. One description of genetic factors involved in the breeding of Brassica species is the Triangle of U.