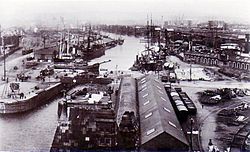 Tiger Bay (Welsh: Bae Teigr) was the local name for an area of Cardiff which covered Butetown and Cardiff Docks. It was re-branded as Cardiff Bay following the building of the Cardiff Barrage which dams the tidal rivers Ely and Taff to create a body of water.

For more details on this topic, see Cardiff Docks.

The development of the Cardiff Docks played a major part in Cardiff’s development by being the means of exporting coal from the South Wales Valleys to the rest of the world, helping to power the industrial age. The coal mining industry helped fund the growth of Cardiff to become the capital city of Wales and helped the Third Marquis of Bute, who owned the docks, become the richest man in the world at the time.

In 1794, the Glamorganshire Canal was completed, linking Cardiff with Merthyr, and in 1798 a basin was built, connecting the canal to the sea. Increasing agitation for proper dock facilities led Cardiff's foremost landowner, John Crichton-Stuart, 2nd Marquess of Bute, to promote the construction of the West Bute Dock, opened in October 1839. Just two years later, the Taff Vale Railway was opened. From the 1850s coal supplanted iron as the industrial foundation of South Wales, as the Cynon Valley and Rhondda Valley were mined.

Exports reached 2 million tons as early as 1862, with the East Bute dock opening in 1859. In 1862, 2,000,000 tons of coal were exported from Cardiff Docks; by 1913, this had risen to 10,700,000 tons. Frustration at the lack of development at Cardiff led to rival docks being opened at Penarth in 1865 and Barry, Wales in 1889. These developments eventually spurred Cardiff into action, with the opening of the Roath Dock in 1887, and the Queen Alexandra Dock in 1907. By then, coal exports from the South Wales Coalfield via Cardiff totalled nearly 9 million tons per annum, much of it exported in the holds of locally-owned tramp steamers.

By 1932, in the depths of the Great Depression which followed the 1926 United Kingdom general strike, coal exports had fallen to below 5 million tons and dozens of locally owned ships were laid-up. It was an era of depression from which Cardiff never really recovered, and despite intense activity at the port during the Second World War, coal exports continued to decline, finally ceasing in 1964.

As Cardiff's coal exports grew, so did its population; dockworkers and sailors from across the world settled in neighbourhoods close to the docks, known as Tiger Bay from the fierce currents around the local tidal stretches of the River Severn.

Migrant communities from up to 45 different nationalities, including Norwegian, Somali, Yemeni, Spanish, Italian, Caribbean and Irish helped create the unique multicultural character of the area.

Tiger Bay had a reputation for being a tough and dangerous area. Merchant seamen arrived in Cardiff from all over the world, only staying for as long as it took to discharge and reload their ships. Consequently the area became the Red-light district of Cardiff, and many murders and lesser crimes went unsolved and unpunished, the perpetrators having sailed for other ports. However, locals who lived and stayed in the area describe a far friendlier place.[1]

After the Second World War most of the industry closed down, and the area became derelict.

In Victorian times, Tiger Bay bore a distinctly rough reputation. The name "Tiger Bay" was applied in popular literature and slang (especially that of sailors) to any dock or seaside neighborhood which shared a similar notoriety for danger.[2]

The 1959 film Tiger Bay included many scenes shot in the docks area and at Newport Transporter Bridge, twelve miles from Cardiff.[3] A 1997 television drama of the same title was also based in the area.[4]

Tiger Bay was mentioned as one of the locations in Ian Dury & The Blockheads' song "Hit Me With Your Rhythm Stick".

On her 2009 album The Performance, Shirley Bassey sings the semi autobiographical "The Girl From Tiger Bay" which was written by the Manic Street Preachers and David Arnold.

For more details on this topic, see Cardiff Bay.

In 1999, new life was injected into the area by the Cardiff Bay Development Corporation, which bulldozed many of the now derelict and decrepit buildings and streets to create new living spaces. This redevelopment was completed by the building of the Cardiff Bay Barrage, one of the most controversial building projects of the day but also one of the most successful,[5] that impounds the Rivers Taff and the Ely to create a massive fresh-water lake. This resulted in the equally controversial renaming area to Cardiff Bay.

HMS Tiger Bay (originally; ARA Islas Malvinas GC82) is a former Argentine Z-28 patrol boat that was captured by the British and brought into service with the Royal Navy at the end of the Falklands War. She is now stationed in Portsmouth Harbour.