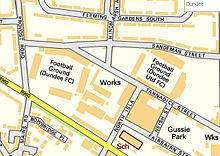 Dundee Football Club, founded in 1893, are a football club based in the city of Dundee, Scotland. They are nicknamed The Dee or The Dark Blues and play their home matches at Dens Park. Their shirt colour is dark blue. Dundee currently play in the Scottish First Division, having been relegated from the Scottish Premier League following the 2004–05 season. For the past five seasons, despite some considerable investment, they have failed to gain promotion back to the top tier of Scottish football.

On 1 November 2010, Dundee were given a record 25-point deduction by the SFL as punishment for going into administration for the second time in seven years. This was enforced alongside a ban on signing any new players whilst still in administration.[1]

The club were relatively unsuccessful in their early days until the Scottish Cup win of 1910, beating Clyde in a twice replayed final.

Dave Halliday had played on the left for his previous clubs, his hometown side Queen of the South and St. Mirren. Halliday went then to Dundee in 1921 with the celebrated Alec Troup already playing on the left wing. Dundee thus converted Halliday to centre forward with prolific results, finishing as Scottish top scorer in the 1923–24 season with 38 goals from 36 appearances - a very good return in the era of the 3 man off side rule. With Halliday Dundee reached the 1924–25 Scottish Cup final eliminating the holders en route, the Airdrieonians side of Hughie Gallacher. Halliday scored 103 goals in just 147 league and cup appearances for the Dees

The first decade after the war saw Dundee come close to a league title in the 1948–49 season, finishing just one point behind champions Rangers. They went on to win two League Cups and reach a Scottish Cup final in 1952 and they also paid a Scottish record fee of £15,000 for Billy Steel. At this time Dundee's home attendances averaged more than 20,000.

In the 1958–59 Scottish Cup Dundee suffered a shock 1–0 defeat to Highland League side Fraserburgh. This is widely regarded as Dundee's most embarrassing defeat in their history.

Bob Shankly (brother of Bill Shankly) was appointed manager in 1959. Dundee won the league title of Scotland's top division, then called the Division One, in the 1961–62 season. With players such as Bobby Cox, Alan Gilzean, Alex Hamilton, Bobby Seith, Gordon Smith and Ian Ure they clinched the title with a win against St. Johnstone, which in turn relegated St. Johnstone to the then Second Division. Gordon Smith earned the unique distinction of being the only player to win the Scottish football championship with three different clubs (Hibs, Hearts and Dundee), none of them either half of the traditionally dominant Old Firm.

The following season the club reached the semi-finals of the European Cup beating 1. FC Köln, Sporting Clube de Portugal and R.S.C. Anderlecht, before losing to A.C. Milan. The Dees reached the Scottish Cup final again in the 1963–64 competition. Shankly moved on from Dundee in February 1965.

The next manager after Shankly was former player Bobby Ancell from the 1947 B Division Championship side. Ancell took Dundee to a 1967-68 League Cup final against the previous season's European Cup winners, Celtic. Ancell's team scored three times at Hampden Park in Celtic's native Glasgow but still lost out 5-3. In the 1967–68 Inter-Cities Fairs Cup Dundee eliminated opposition from Netherlands, Belgium and Switzerland to meet Leeds United in the semi final. After a 1-1 draw at Dens, a 1-0 second leg win took Leeds through.

In 1973 under the management of David White and captaincy of Tommy Gemmell the League Cup returned to Dens following a 1-0 win against Celtic. This is to date the last occasion when one of Scotland's three major trophies went to Dens Park. Dundee lost in the 1980 Scottish League Cup Final to city rivals Dundee United with Billy Williamson playing in blue against his previous club.

In 2000 the club hit the headlines when they signed Argentine international Claudio Caniggia,[2] who later signed for Rangers.[3] Caniggia was only one of many foreign signings in the Dundee side in the early 2000s, which also included former Newcastle United player Temuri Ketsbaia.[4] The signing of such high-profile players along with many others led Dundee to a Scottish Cup final and two top-six finishes. This was achieved under the managership of Ivano Bonetti, who also made a short but notable contribution on the park linking up well with the Caniggia. The attendances at Dundee were still short of the hoped for numbers and Dundee FC's spending significantly out-weighed their income. Dundee were soon forced into administration due to unsustainable spending, however the main factor was the lack of income during the period when the club's plans to sell off players at a profit was doomed when the bottom fell out of the transfer market just at that time.[citation needed]

Before Dundee went into financial trouble they knocked out Glasgow side Partick Thistle 2–0 away from home in the third round of the Scottish Cup. The fourth round saw Dundee knock out Aberdeen 2–0 at Dens Park. Dundee continued their march towards Hampden Park with a 1–1 draw away and a 4–1 extra time victory over Falkirk at Dens booked their place in the semi-finals playing Inverness CT at Hampden Park. The only goal of the game was by Georgi Nemsadze. This secured a 1–0 victory and a place in the Final against Rangers. In the final Barry Smith hit the post for Dundee but Lorenzo Amoruso scored to bring Dundee's cup run to an end.

In 2003, due to the clubs failure to sell on players as anticipated, insufficient income was raised to fund the large wage bill, under owners Peter & James Marr, resulting in a £23 m debt, they were forced to go into administration with many players such as Fabian Caballero, Craig Burley and Georgian captain Giorgi Nemsadze leaving the club in 2005. Despite this huge debt, Dundee survived by selling their stadium in 2003. But the club was then relegated to the second tier of the Scottish leagues, where they have remained since. In mid-2006, it was announced that financial restructuring would see the club become debt-free.

In early 2007 James & Peter Marr severed some of their ties with Dundee, stepping down as Chairman and Chief Executive respectively, when their company P&J Taverns was forced into administration. Bob Brannan and Dave MacKinnon took the Marrs' place.

In 2008 after a poor run in the league, manager Alex Rae was sacked, with former manager Jocky Scott taking over for his third stint with the club.[5] 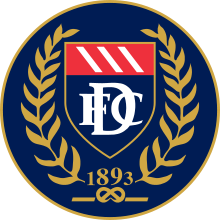 On 20 March 2010, Scott was sacked as manager after a 3-0 defeat at the hands of Airdrie United.[8] He was replaced on the 21 March 2010 by Gordon Chisholm, with Billy Dodds as his assistant.

In September 2010 Dundee was again on the brink of going into administration due to a £365,000 unpaid tax bill. During negotiations with HM Revenue & Customs, the club's offer to pay £100,000 immediately was rejected.[9] On the 14 September it was announced that the club would be going into administration.[10] As punishment for entering administration the Scottish Football League docked Dundee 25 points on 1 November 2010. At the time the punishment was imposed, this left Dundee bottom of the First Division table with -11 points, 20 points behind the second-bottom team. Dundee later appealed their punishment and are to hear the outcome before Christmas 2010. On 10 December 2010 the Dark Blues Business Trust was set up by former Dundee owner Peter Marr to help the club recover from their financial situation. On 17 December 2010 Dundee's appeal was rejected which resulted in Dundee appealing the punishment to the SFA, who also rejected it. Dundee went on a 23 match undefeated streak in the first division beating the previous record set by the team.

Note: Year is year inducted into Hall of Fame