The club has a traditional local rivalry with St. Mirren.[3]

Morton won the Scottish Cup in 1922, and achieved their highest league finish in 1916–17, finishing as runners-up to champions Celtic.

Morton Football Club was established in 1874.[4] In the early 1870s the popularity of football was growing, with many clubs being established around Scotland. At the club's inaugural meeting, the first recorded words were "that this club be called Morton Football Club".[4] The true reason for the name 'Morton' remains unclear, though the general consensus is that the club was named after the 'Morton Terrace', a row of houses next to the original playing field, where some of the players lived.[4] The name would be altered in 1994 to read 'Greenock Morton Football Club', to celebrate the club's links with its hometown.

Morton's greatest success came when they defeated Rangers 1–0 in the 1922 Scottish Cup Final. Jimmy Gourlay scored the winning goal, direct from a free kick in the 11th minute. Straight after the match Morton boarded a train for Hartlepool to play the local side in a pre-arranged friendly match. The celebrations were delayed until the Wednesday when 10,000 locals turned out at Cappielow Park to celebrate.

Morton have made two other major cup final appearances. On Saturday 17 April 1948, Morton drew 1–1 with Rangers in the Scottish Cup Final.[5] Morton's goal was a free kick scored by Jimmy White. The match was replayed on Wednesday 21 April. This time Rangers won 1–0 after extra time. The goal was said to be highly controversial because it was claimed that Morton goalkeeper Jimmy Cowan was blinded by the flash of a camera.[6] These matches were significant because of the huge crowds they attracted. The first match was played in front of 132,629; the replay in front of 133,750, which was, at the time a British record attendance for a midweek match.[7]

Morton's third and final major cup final to date was in the League Cup and this was played on Saturday 26 October 1963 when Rangers (who Morton have faced in all three final appearances) won by 5 goals to nil[8](HT: 0–0) in front of 106,000 supporters.

During the Second World War 'guest' players were common at clubs throughout Great Britain. Morton were particularly fortunate in this respect in that two of English football's greatest ever players turned out at Cappielow. Sir Stanley Matthews[9] and Tommy Lawton[10] made several guest appearances for Morton. When Morton reached the 1948 Scottish Cup Final both players sent telegrams wishing good luck to their former club. Matthews simply said 'I am delighted to see Morton reach the final of the Scottish Cup'.[citation needed] Lawton's was more expressive, he said 'Memories of happy days during the war at Cappielow compel me to wish the Morton manager & the boys all the best of luck in their cup final at Hampden'.[citation needed]

To date Morton have played in a European Club Competition once. After finishing 6th in Scotland's top division in 1967–68 Morton qualified for the Inter-Cities Fairs Cup. They were drawn to play Chelsea but were eliminated at the first hurdle after a 5–0 defeat at Stamford Bridge and a 4–3 defeat at Cappielow.[11]

In 1992–93 Morton lost 3–2 to Hamilton Academical in the Scottish Challenge Cup Final[12] in front of 7,391 fans. The final was played at Love Street, the home of Morton's arch rivals St. Mirren.

After experiencing financial problems the team was relegated from the First Division at the end of the 2000–01 season after a 6-year stay and was put into administration. The club's financial problems continued and a second successive relegation followed the next season. In season 2002–03, Morton's first ever season in the Third Division, the club's financial situation was resolved by the takeover by chairman Douglas Rae. Rae appointed John McCormack as manager,[13] and the team won the Third Division championship at the first attempt, confirming their position with a 1–0 victory over Peterhead in front of a Third Division record crowd of 8,497 people.

After a strong start to the 2003–04 season the team fell away after the turn of the year, and finished in 4th place, well outside the promotion places. This came after being 12 points ahead in the Championship race at the half way stage. This led to unfounded allegations that some players had placed large bets on nearest rivals Airdrie United to win the league, which they eventually did.[citation needed]

Jim McInally was announced as McCormack's successor,[14] and in his first season as manager the club failed to gain promotion to the First Division by a single point, finishing behind Stranraer in 3rd place.

Morton failed to gain promotion to the First Division during the 2005–06 season. Finishing 2nd was not enough, as the SFL playoffs meant that only the championship-winning team would be promoted automatically. Gretna won the division, so Morton entered play-offs alongside Peterhead (3rd), Partick Thistle (4th), and Stranraer (9th in Division One.) Morton's first play-off match was against Peterhead, and the Greenock side were defeated 1–0 over two legs, the only goal a penalty in the second match at Balmoor.[15]

The following season, a week after a 9–1 defeat of Forfar Athletic at Cappielow Park,[16] Morton achieved promotion to the First Division ,[17] and went on to become Second Division Champions.[18]

Jim McInally resigned on 11 February 2008[19] after a run of poor results allowed Morton to slip into 9th place in the First Division and was replaced by Davie Irons, with Derek Collins joining him as Assistant Manager.[20] Morton battled relegation for most of the season and survived on the final day with a 3–0 victory against Partick Thistle, to avoid the relegation playoff by a single goal. Irons was sacked in September 2009 and replaced October by James Grady, until the end of the season.[21] Grady was removed from the club in May 2010,[22] and replaced by Allan Moore.[23]

The team's home strip is traditionally a blue and white hooped shirt with white shorts and white socks, though season 2006–2007 saw the team playing a blue and white striped shirt with white shorts and blue socks. Short-lived yet distinctive designs have been used over the years, including sky blue and white stripes in the style of the Argentine national team and even a blue Morton tartan. The away strip tends to vary much more; for the 2003–2004 season it was an all yellow outfit, changing in 2004–2005 to all white, which in turn became the 3rd team strip in 2005–2006, with the special re-issue of the blue Morton tartan strip. The sponsor's logo on the strip is that of Millions, a brand owned by the Club Chairman's confectionery concern, Golden Casket (Greenock) Ltd.[24] 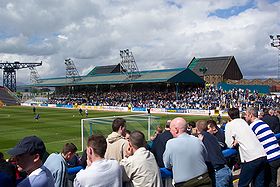 Their stadium is Cappielow Park in Greenock, a ground they have occupied since 1879. Cappielow's etymology is allegedly of Scandinavian origin, although details of this are sketchy. The current capacity is around 11,000, with 5,741 of these being seated. In December 2008, Morton purchased the Reid Kerr sponsored East stand from local rivals St. Mirren for £50,000, to improve the away end at Cappielow.[25] This would also bring the stadium closer to the 6000 covered seating required to host SPL football.

The area currently behind the western goal (upon which the new stand will be built) is known as the Wee Dublin End, which contains non-backed bench seating, converted from the old terracing that once stood there. The main stand contains plastic bucket seating to replace the old wooden benches that were a fixture of the ground until the late 1990s. The "Cowshed" lies to the north of the pitch; formerly a fully terraced arena for both home and away supporters (complete with segregation fence down the middle), it is now for home supporters only, with much of the frontal terracing removed, and plastic bucket seats occupying its place. Behind the eastern goal is the "Sinclair Street" end, with uncovered terracing.

The club has a local rivalry with St. Mirren, from nearby Paisley, in what is known as the Renfrewshire derby. The two clubs originally had derby rivals in their own locality, with Abercorn playing in Paisley,[28] while Morton's main rivals were Port Glasgow Athletic, who ceased running a senior team in the Scottish League in 1912. Port Glasgow Athletic even shared Morton's Cappielow ground from 1917 until 1921 when the needs of the war saw their ground compulsorily purchased for housing for the local shipyards.

Morton also have a traditional, although smaller, rivalry with Kilmarnock although this has diminished in recent years due to Killie's long stay in the SPL and Morton's stay in the lower divisions.

Players who have appeared for first team in any competition / friendly match.

*Note A: Squad numbers are not used by the Scottish Football League

Players with over 50 league appearances. Including those with multiple spells at the club.

All statistics are for league games, post-World War II.[29]

To be included in this list players must have met the following criteria...

This list does not contain caretaker managers such as David Hopkin or Joe McLaughlin.

Morton first entered the Scottish Cup in season 1877/1878, and won it once in 1922. Over the course of Morton's time in the competition has changed format 5 times, to its current format of 8 rounds.

So far Morton have finished the competition in the following rounds, this many times.