The party follow their European counterparts in many ways, arguing that the state should care for its citizens but not get otherwise economically involved. In the late 1990s they positioned themselves as a family-friendly party. The party is an observer member of the European People's Party (EPP).

Knut Arild Hareide is the current leader of the party. Their leader from 1983 to 1995, Kjell Magne Bondevik, was one of the most prominent political figures in modern Norway, serving as Prime Minister from 1997 to 2000 and 2001 to 2005. Under the old leadership of Bondevik and Valgerd Svarstad Haugland, the party was to some extent radicalized and moved towards the left. Due largely to their poor showing in the 2009 elections, the party has seen a conflict between its conservative and liberal wings over which direction their political ideology should shift in the future.[4]

In social policy the Christian Democratic Party generally have conservative opinions. On life issues, the party opposes euthanasia, and abortion, though it can support abortion in cases of rape or when the mother's life is at risk. The party supports accessibility to contraception as a way of lowering abortion rates.[8] They also want to ban research on human fetuses, and have expressed skepticism for proposals to liberalize the biotechnology laws in Norway.[9] Bondevik's second government made the biotechnology laws of Norway among the strictest in the World, with support from the Socialist Left Party and the Centre Party, but in 2004 a case regarding a child with thalassemia brought this law under fire.[10][11] On gay rights issues, the party supports possibilities for gay couples to live together, but opposes gay marriage and gay adoption rights. The party maintains neutrality on the issue of gay clergy, calling that an issue for the church.[12]

Since the party was established, a declaration of Christian faith has been required if a person is to be elected to a position of trust in the party. The increase of support from other religions, including Islam, have stimulated efforts to abolish this rule.[13]

KrF was founded as a reaction to the growing secularism in Norway in the 1930s. Cultural and spiritual values were proposed as an alternative to political parties focusing on material values. The immediate cause of its foundation was the failure of Nils Lavik, a popular figure in the religious community, to be nominated as a candidate for Venstre (the liberal party), for the parliamentary elections in 1933. In reaction to this, Kristelig Folkeparti was set up, with Lavik as their top candidate in the county of Hordaland. He succeeded in being elected to Stortinget, the Norwegian parliament. No other counties were contested. At the next elections, in 1936, the party also ran in Bergen, and succeeded in electing a representative from there as well. In 1945, at the first elections after the Nazi occupation of Norway, the party was organised on a nationwide basis, and won 8 seats.

KrF became part of a short-lived non-socialist coalition government along with Høyre (Conservatives), Venstre and Senterpartiet (Center Party) in 1963. At the elections of 1965, these four parties won a majority of seats in Stortinget and ruled in a coalition government from 1965 to 1971.

KrF opposed Norwegian membership in the European Community ahead of the referendum in 1972. The referendum gave a no-vote, and when the pro-EC Labour government resigned, a coalition government was formed among the anti-EC parties, KrF, Venstre and Senterpartiet. Lars Korvald became KrF's first prime minister for a year, until the elections of 1973 restored the Labour government.

The 1981 elections left the non-socialists with a majority in parliament, but negotiations for a coalition government failed because of disagreement over the abortion issue.[14] However, this issue was later toned down, and from 1983 to 1986, and from 1989 to 1990 KrF was part of coalitions with Høyre and Senterpartiet.

In the 2005 election KrF received only 6.8%, and the party became part of the opposition in the Storting.

Geographically, the Christian Democrats enjoy their strongest support on the south coast. In the 2005 elections, their best results were in Vest-Agder with 18.9% of the vote, compared to a national average of 6.8%.[15]

KrF has also sought support among the Muslim minority in Norway, pointing to their restrictive policies on alcohol and pornography, although party's support for Israel concerns several Muslim voters.[17] 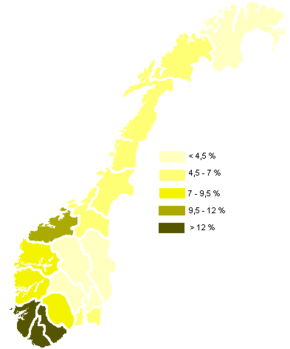 Support for KrF in the counties of Norway at the Norwegian parliamentary elections of 2005. 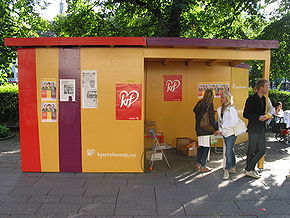 Campaign booth at Karl Johans gate ahead of the Norwegian local elections, 2007.

¹KrF ran on mutual lists with other parties in some constituencies. This figure is an estimate by Statistics Norway.