The Conservative Party (Norwegian: Høyre, H, literally "right") is a Norwegian political party. The current leader (since 2004) is Erna Solberg. The party was since the 1920s consistently the second largest party in Norway, but has been surpassed by the growth of the Progress Party in the late 1990s and 2000s. In 2005, the party achieved the worst election in its entire history, but has seen a strong surge in polls since the 2009 election.

The party regards itself as an opponent of socialism, and advocates economic liberalism and reduction of taxes and public spending. It has historically been the most outspokenly pro-European Union party in Norway, supporting Norwegian membership during both the 1972 and 1994 referendums.[5] The party generally supports privatizations and tougher law and order measures.[8]

Founded in 1884, the Conservative Party is the second oldest party in Norway, only after the Liberal Party. In the interwar era, one of the main goals for the party was to achieve a centre-right alliance against the growing labour movement, when the party went into a decline. From 1950 to 2009, the party participated in six governments; two 1960s national governments (Lyng's Cabinet and Borten's Cabinet), one 1980s Conservative Party minority government (Willoch's First Cabinet), two 1980s three-party governments (Willoch's Second Cabinet and Syse's Cabinet), and finally the 2000s Bondevik's Second Cabinet.[8]

The Conservative Party of Norway was founded in 1884 with Emil Stang as its first Chairman. Ever since its creation, Høyre has been one of the larger political parties in Norway. For many years, it was the largest non-socialist party in Norway and has taken part in many governments. It lost this distinction with a historically bad election in 2005, receiving only 14.1 percent of the vote, and failed again to take back the distinction in 2009. It is currently the third largest party in the Norwegian Parliament, Stortinget, after the Norwegian Labour Party and the Progress Party.

The party is committed to fiscal free market policies, including tax cuts and little government involvement in the economy. Høyre is also the only party in the Storting which proposes a reduction in public spending. The party is often associated with wealth and is often attacked by the left for defending the country's richest. In contrast to the party's center-right economic orientation, Høyre's social policies are quite liberal, with the party's programme supporting liberal policies such as gay adoption rights and even gay marriage. It is also in favour of Norwegian membership in the European Union.

The party has 25,000 registered members (2008). The Central Board of Høyre meets seven times a year to discuss important matters such as budget, organizational work, plans, party platforms, drawing up political lines. 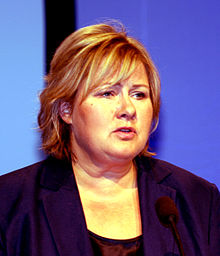 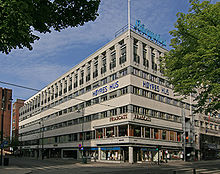