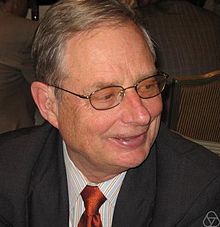 Phillip Griffiths in 2008
(photo from MFO)

Phillip Griffiths (born October 18, 1938, Raleigh, North Carolina) is an American mathematician, known for his work in the field of geometry, and in particular for the complex manifold approach to algebraic geometry. He was a major developer in particular of the theory of variation of Hodge structure in Hodge theory and moduli theory.

He received his B.S. from Wake Forest College in 1959 and his Ph.D. from Princeton University in 1962 working under Donald Spencer. Since then, he has held positions at Berkeley (1962-1967), Princeton (1967-1972), Harvard University (1972-1983), Duke University (1983-1991), and the Institute for Advanced Study (1991 to the present), where he was Director until 2003. He has published on algebraic geometry, differential geometry, geometric function theory, and the geometry of partial differential equations.

In 2008 he was awarded the Wolf Prize (jointly with Deligne and Mumford). He is co-author, with Joe Harris, of Principles of Algebraic Geometry, a well-regarded textbook on complex algebraic geometry.

Griffiths serves as the Chair of the Science Initiative Group.