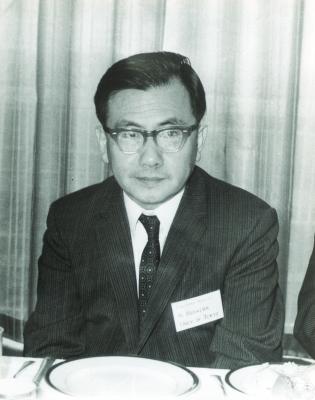 nihongo|Kunihiko Kodaira|小平 邦彦|Kodaira Kunihiko|, &ndash; , was a ese known for distinguished work in and the theory of s, and as the founder of the Japanese school of algebraic geometers. He was awarded a in 1954, being the first Japanese to receive this honour.

He was born in . He graduated from the in 1938 with a degree in mathematics and also graduated from the physics department at the in 1941. During the war years he worked in isolation, but was able to master as it then stood. He obtained his degree from the in 1949, with a thesis entitled "Harmonic fields in Riemannian manifolds". He was involved in cryptographic work from about 1944, at a time of great personal difficulty, while holding an academic post in Tokyo.

In 1949 he travelled to the in at the invitation of . At this time the foundations of Hodge theory were being brought in line with contemporary technique in operator theory. Kodaira rapidly became involved in exploiting the tools it opened up in algebraic geometry, adding as it became available. This work was particularly influential, for example on .

In a second research phase, Kodaira wrote a long series of papers in collaboration with , founding the of complex structures on manifolds. This gave the possibility of constructions of s, since in general such structures depend continuously on parameters. It also identified the sheaf cohomology groups, for the sheaf associated with the , that carried the basic data about the dimension of the moduli space, and obstructions to deformations. This theory is still foundational, and also had an influence on the (technically very different) of . Spencer then continued this work, applying the techniques to structures other than complex ones, such as s.

In a third major part of his work, Kodaira worked again from around 1960 through the , from , from the point of view of complex manifold theory. This resulted in a typology of seven kinds of two-dimensional compact complex manifolds, recovering the five algebraic types known classically; the other two being non-algebraic. He provided also detailed studies of s of surfaces over a curve, or in other language s over s, a theory whose arithmetic analogue proved important soon afterwards. This work also included a characterisation of s as deformations of s in "P"4, and the theorem that they form a single class. Again, this work has proved foundational. (The K3 surfaces were named after Kummer, Kähler, and Kodaira).