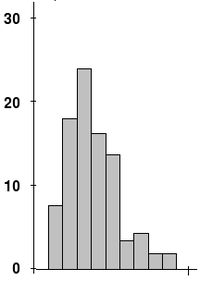 In probability theory and statistics, skewness is a measure of the asymmetry of the probability distribution of a real-valued random variable. The skewness value can be positive or negative, or even undefined. Qualitatively, a negative skew indicates that the tail on the left side of the probability density function is longer than the right side and the bulk of the values (possibly including the median) lie to the right of the mean. A positive skew indicates that the tail on the right side is longer than the left side and the bulk of the values lie to the left of the mean. A zero value indicates that the values are relatively evenly distributed on both sides of the mean, typically but not necessarily implying a symmetric distribution.

The skewness of a random variable X is the third standardized moment, denoted γ1 and defined as

The formula expressing skewness in terms of the non-central moment E[X3] can be expressed by expanding the previous formula,

For a sample of n values the sample skewness is

where k3 is the unique symmetric unbiased estimator of the third cumulant and k2 is the symmetric unbiased estimator of the second cumulant. Unfortunately G1 is, nevertheless, generally biased (although it obviously has the correct expected value of zero for a symmetric distribution). Its expected value can even have the opposite sign from the true skewness. For instance a mixed distribution consisting of very thin Gaussians centred at −99, 0.5, and 2 with weights 0.01, 0.66, and 0.33 has a skewness of about −9.77, but in a sample of 3, G1 has an expected value of about 0.32, since usually all three samples are in the positive-valued part of the distribution, which is skewed the other way.

Skewness can be infinite, as when

or undefined, as when

In this latter example, the third cumulant is undefined. One can also have distributions such as

where both the second and third cumulants are infinite, so the skewness is again undefined.

. This shows that the skewness of the sum is smaller, as it approaches a Gaussian distribution in accordance with the central limit theorem.

Skewness has benefits in many areas. Many models assume normal distribution; i.e., data are symmetric about the mean. The normal distribution has a skewness of zero. But in reality, data points may not be perfectly symmetric. So, an understanding of the skewness of the dataset indicates whether deviations from the mean are going to be positive or negative.

D'Agostino's K-squared test is a goodness-of-fit normality test based on sample skewness and sample kurtosis.

Other measures of skewness 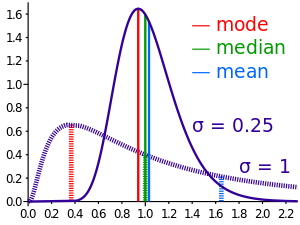 Comparison of mean, median and mode of two log-normal distributions with different skewness.

Karl Pearson suggested simpler calculations as a measure of skewness:[3] the Pearson mode or first skewness coefficient,[4] defined by

as well as Pearson's median or second skewness coefficient,[5] defined by

Starting from a standard cumulant expansion around a Normal distribution, one can actually show that skewness = 6 (mean − median) / standard deviation ( 1 + kurtosis / 8) + O(skewness2).[citation needed] One should keep in mind that above given equalities often don't hold even approximately and these empirical formulas are abandoned nowadays. There is no guarantee that these will be the same sign as each other or as the ordinary definition of skewness.

can be defined,[6][7] where F is the cumulative distribution function. This leads to a corresponding overall measure of skewness defined as the supremum of this over the range 1/2≤u<1,[6] while another measure can be obtained by integrating the numerator and denominator of this expression.[8] Galton's measure of skewness is γ(u) evaluated at u=3/4,[9] while other names for this same quantity are "Bowley Skewness",[10] "Yule-Kendall index"[11] and "quartile skewness". The function γ(u) satifies -1≤γ(u)≤1, and is well-defined without requiring the existence of any moments of the distribution.[8]

Use of L-moments in place of moments provides a measure of skewness known as the L-skewness.

A simple skewness coefficient derived from the sample mean and individual observations:

The skewness coefficient a approaches to normal distribution. If data set has at least 45 values then a is nearly normal. Distribution of a if data are taken from normal or uniform distribution is the same. Behavior of a in other distributions is currently unknown. Although this measure is very easy to understand, analytic approach is difficult.

A value of skewness equal to zero does not imply that the probability distribution is symmetric. Thus there is a need for another measure of asymmetry which has this property: such a measure was introduced in 2000.[13] It is called distance skewness and denoted by dSkew. If X is a random variable which takes values in the d-dimensional Euclidean space, X has finite expectation, X' is an independent identically distributed copy of X and