Orlando-Sanford International Airport (IATA: SFB, ICAO: KSFB, FAA LID: SFB) is a public commercial air service airport in Sanford, Florida, near Orlando. It was originally constructed as a military installation known as Naval Air Station Sanford that was in operation as a Master Jet Base for carrier-based attack and reconnaissance aircraft until 1969.

Due to heavy flight training operations at the airport, it is consistently in the top 30 busiest airports in the world in terms of total flight operations (takeoff and landings). It functions as the Orlando area's secondary commercial airport, but is located farther away from downtown Orlando and the attraction areas of Walt Disney World, Universal Studios Florida and SeaWorld Orlando than the larger, primary airport, Orlando International Airport (MCO/KMCO).

The airport is owned by the Sanford Airport Authority and managed by TBI plc, one of the world's leading airport operators, which owns London Luton Airport, Cardiff Airport, and Belfast International Airport in the United Kingdom, as well as Stockholm-Skavsta Airport in Sweden, and operates airports in South America. Because of that affiliation, Orlando Sanford International Airport is served primarily by British charter air carriers servicing the European market for leisure travel to Central Florida. TBI is also the provider of ground handling services for airlines. Although it is primarily a landing point for European travel, Sanford is also the second largest focus city for Las Vegas-based Allegiant Air and the smallest focus city for Myrtle Beach-based Direct Air.

Decommissioned in 1946 and placed in a caretaker status, the base was recommissioned as Naval Auxiliary Air Station Sanford (NAAS Sanford) in 1950 in response to both the Korean War and the Cold War. Subsequently redesignated as a full naval air station and renamed NAS Sanford, the installation initially served as a base for the AJ Savage attack aircraft. Substantial upgrades followed in order to turn the air station into a Master Jet Base for the carrier-based Douglas A-3 Skywarrior (at the time, designated A3D) nuclear attack aircraft of Heavy Attack Wing ONE (HATWING ONE). In addition to the Skywarrior, other associated land-based training aircraft supporting A3D training, such as the P2V-3W Neptune, were also assigned.[4]

The upgrades to the former NAAS to achieve status as a full-fledged NAS and Master Jet Base included lengthening of the main runway to 8,000 feet (2,400 m) with additional overruns of approximately 2,000 feet (610 m) on both ends; construction of additional new hangars; barracks and administrative support buildings for the air station, heavy attack wing, heavy attack squadrons, and Marine Barracks; installation or upgrades to precision approach radar/ground controlled approach (PAR/GCA), non-directional beacon (NDB) and tactical air navigation (TACAN) navigational aids; a robust storage and distribution system for JP-5 jet fuel (which relied on resupply via a railroad spur into the base); a Navy Dispensary; a Navy Exchange complex and garage/service station/MiniMart; and morale, welfare and recreation facilities that included a base theater, two swimming pools, lakeside recreational facilities and separate clubs for officers, chief petty officers and enlisted personnel. Like Pinecastle AFB (later renamed McCoy AFB), a Strategic Air Command installation approximately 25 miles (40 km) to the south, a commissary and full-fledged Naval Hospital facilities were not considered necessary at NAS Sanford due to the relatively close proximity of a commissary and USAF Hospital at Central Florida's other major military installation at the time, the nearby Orlando AFB (which was transferred to the U.S. Navy control in 1968 and renamed Naval Training Center Orlando), approximately 12 miles (19 km) miles to the south.

NAAS / NAS Sanford also retained control of OLF Osceola into the early 1960s. However, OLF Osceola's 4000 to 5,000-foot (1,500 m) runways lacked sufficient length and pavement strength for contemporary carrier-based jet aircraft like the A3D. As a result, no improvements were made to the OLF's infrastructure and it was effectively abandoned as an operational facility.[3]

On February 6, 1959, NAS Sanford was dedicated as Ramey Field in honor of Lieutenant Commander Robert W. Ramey, USN, who lost his life by electing to guide his crippled A3D Skywarrior away from a residential area. By staying with the aircraft, LCDR Ramey not only gave his flight crew time to bail out of the aircraft, but also saved the lives of numerous families in the residential community.[7][8]

In the early 1960s, the A-3 aircraft began to be replaced by the Mach 2+ North American A-5A Vigilante aircraft. But by 1964, the strategic nuclear strike mission for carrier-based aircraft was eliminated and the Navy's nuclear strike mission under the SIOP was transferred to the Fleet Ballistic Missile (FBM) nuclear submarine force. As a result, all Vigilante squadrons were converted to a carrier-based tactical reconnaissance mission and redesignated as Reconnaissance Attack Squadrons (RVAH). Existing A-5A and A-5B aircraft were modified to the RA-5C Vigilante configuration and the North American production line shifted to producing all subsequent aircraft as RA-5Cs. Heavy Attack Wing ONE was renamed Reconnaissance Attack Wing ONE and NAS Sanford-based squadrons routinely deployed aboard both Atlantic and Pacific Fleet aircraft carriers of the FORRESTAL, KITTY HAWK and ENTERPRISE classes, seeing extensive action during the Vietnam War. Numerous RA-5C flight crews and aircraft were lost to enemy action, with several Sanford-based Naval Aviators and Naval Flight Officers becoming prisoners of war in Vietnam until repatriation in 1973. In addition to RA-5C aircraft, NAS Sanford also continued to operate the TA-3B variant of the Skywarrior, several examples of which were attached to the RA-5C Fleet Replacement Squadron (FRS), Reconnaissance Attack Squadron THREE (RVAH-3) for training Naval Flight Officers as Reconnaissance Attack Navigators (RAN) in the RA-5C. NAS Sanford also operated the R4D-8/C-117 Skytrain as an operational support aircraft assigned to the air station proper.[9][10]

Congress closed NAS Sanford in 1968 due to funding constraints caused by the Vietnam War, transferring the wing and squadrons to the former Turner AFB, renamed as NAS Albany, Georgia. The wing and squadrons subsequently relocated to NAS Key West, Florida during 1974-75 and continued to deploy to both the Atlantic, Mediterranean and Pacific aboard FORRESTAL, KITTY HAWK, ENTERPRISE and NIMITZ class aircraft carriers. RA-5C units remained operational at NAS Key West until the RA-5C's retirement from active service in 1980.[10] A commemorative NAS Sanford Memorial Park, along with plaques and a retired RA-5C Vigilante aircraft on loan from the National Museum of Naval Aviation were dedicated in May 2003 and are positioned on the main entrance road within the Orlando Sanford International Airport perimeter in memory to NAS Sanford personnel who served their country during World War II, Vietnam and the Cold War. A PV-1 Ventura, also on loan from the National Museum of Naval Aviation, is in the process of being restored at the airport and will join the RA-5C on display. An A-3 Skywarrior has also been requested from the Navy for future restoration and display.[11] 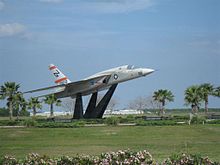 The City of Sanford assumed control of the former NAS Sanford in 1969 and renamed the facility Sanford Airport, hiring the air station's recently retired Executive Officer, Commander J. S. "Red" Cleveland, USN (Ret.), as the first Airport Manager. The city concurrently established the Sanford Airport Authority as its policy and oversight body. For the next twenty-five years, the airport was a general aviation facility, supporting numerous locally-based and transient private and corporate aircraft and periodically hosting combined civilian/military air shows and associated static displays. Initially functioning as an uncontrolled airfield, the former Navy control tower was reactivated in the early 1970s as a non-FAA facility, employing a number of retired enlisted Navy air traffic controllers who had previously served at NAS Sanford.

OLF Osceola was transferred to the control of Seminole County, Florida but was never officially recommissioned as an active airfield. In the 1970s, the former OLF began to be used by general aviation drug smuggling aircraft as a transshipment point. Following a major drug interdiction by local and federal law enforcement agencies, Seminole County placed large "speed bumps at various intervals across the runway to deter future illegal use. By the 1980s, the county began to utilize the site as a landfill and dump, demolishing remaining runway infrastructure.[3]

In 1992, major portions of the action film Passenger 57, starring Wesley Snipes, were filmed at the then-Orlando Sanford Regional Airport, where it represented a small airport in Louisiana. Shortly after filming, a new control tower was constructed and air traffic control operations assumed by the FAA. The former Navy control tower and the large former Navy hangar to which it had been attached were then demolished.

In the mid-1990s, a new passenger terminal capable of accommodating commercial jet airline service, was constructed and charter airlines catering to the heavy British tourist demographic that had previously been utilizing Orlando International Airport were offered greatly reduced landing fees if they would use Orlando Sanford International Airport and many of these carriers subsequently relocated their operations. Scheduled international and domestic air service soon followed, as reflected by current operations by Icelandair and Allegiant Air.

The dominant runway is 9L/27R. This was constructed from the naval air station's original Runway 9/27, which was an 8,000 ft (2,400 m) x 200 ft (61 m) landing area with overruns of 2,145 ft (654 m) and 1,985 ft (605 m), respectively. Parallel Runways 9C/27C and 9R/27L were later constructed, the former on a previous taxiway and the latter as new construction runway, to support light general aviation aircraft. The airport also has available Runway 18/36, another Navy-constructed runway, for rare northerly fronts that occur in the winter, although at 6,002 feet (1,829 m) in length, this runway is not used for normal commercial traffic.

During 2010, Allegiant Air had announced it was moving many of its flights to larger, and more centrally located Orlando International Airport to compete directly with Airtran Airways. However, in October 2010, Allegiant announced that due to passenger's comments, they would be shifting all flights back to Sanford on February 1, 2011.

Several Airlines serve from Europe and the rest of America serve Orlando Sanford. Thomson Airways and Thomas Cook Airlines also make a fuel stop here on the way to Acapulco.

The NTSB factual report dated December 2007 indicates that the accident was caused by an electrical malfunction, including smoke in the cockpit, that occurred on the previous flight and that was not rectified prior to the accident flight, resulting in the subsequent fire. The accident pilot was informed about the known problem prior to flight, but elected to fly the aircraft regardless.