In his first term, he supported the expansion of the fur trade, establishing Fort Frontenac (in what is now Kingston, Ontario) and came into conflict with the other members of the Sovereign Council over its expansion and over the corvées required to build the new forts. In particular, despite the opposition of bishop François de Laval, he supported selling brandy to the First Nations, which Laval considered a mortal sin. The conflict with the Sovereign Council led to his recall in 1682.

His second term was characterised by the defence of Quebec from a British invasion during King William's War, a successful guerrilla campaign against the Iroquois and English settlements which resulted in the elimination of the Iroquois threat against New France, and a large expansion of the fur trade using Canadian coureurs des bois. He died before his second recall to France.

Louis de Buade was born in Saint-Germain-en-Laye, the son of Henri de Buade, colonel in the regiment of Navarre. The details of his early life are meager, as no trace of the Frontenac papers have been discovered. The de Buades, however, were a family of distinction in the principality of Bearn. Antoine de Buade, seigneur de Frontenac, grandfather of the future governor of Canada, attained eminence as a councilor of state under Henri IV; and his children were brought up with the dauphin, afterwards Louis XIII. 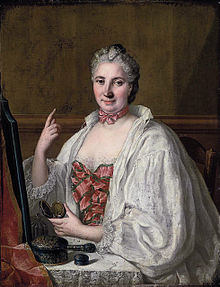 Louis de Buade entered the army at an early age. In the year 1635 he began his military career and he served under the prince of Orange in Holland, and fought with credit and received many wounds during engagements in the Low Countries and in Italy. He was promoted to the rank of colonel in the regiment of Normandy in 1643, and three years later, after distinguishing himself at the siege of Orbitello, where he had an arm broken, he was made marshal de camp. His service seems to have been continuous until the conclusion of the Peace of Westphalia in 1648, when he returned to his father's house in Paris and married, without the consent of her parents, Anne de la Grange-Trianon, a girl of great beauty, who later became the friend and confidante of Madame de Montpensier. The marriage was not a happy one, and after the birth of a son incompatibility of temper led to a separation, the count retiring to his estate on the Indre, where by an extravagant course of living he became hopelessly involved in debt. Little is known of his career for the next fifteen years beyond the fact that he held a high position at court; but in the year 1669, when France sent a contingent to assist the Venetians in the defense of Crete against the Turks, Frontenac was placed in command of the troops on the recommendation of Turenne. In this expedition he won military glory; but his fortune was not improved thereby.

A Seventeenth century painting of Anne de la Grange-Trianon can be seen today at the Chateau de Versailles.

At this period, the affairs of New France claimed the unexpected attention of the French court. From the year 1665 the colony had been successfully administered by three remarkable men: Daniel de Rémy de Courcelle, the governor, Jean Talon, the intendant, and the Marquis de Tracy, who had been appointed lieutenant general for the French king in America; but a difference of opinion had arisen between the governor and the intendant, and each had demanded the others recall in the public interest. At this crisis in the administration of New France, Frontenac was appointed to succeed de Courcelle. 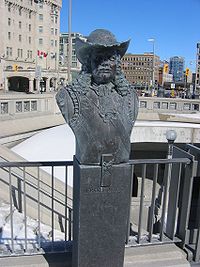 Bust of Frontenac at the Valiants Memorial in Ottawa

The new governor arrived in Quebec on September 12, 1672. From the beginning, it was evident that he was prepared to give effect to a policy of colonial expansion. He was also genuinely ambitious to inaugurate an era of prosperity for Canada.[2] He exercised an independence of action that did not coincide with the views of the monarch or of his minister Colbert. As one of his first acts as governor, he sought to establish in Canada the three estates — nobles, clergy and people — and to establish municipal government in Quebec. The royal policy, however, was adverse to the granting of extensive political rights to the Canadians, and Frontenac's reforms in this direction were disapproved.[2] Measures were adopted to curb his ambition by increasing the power of the Sovereign Council and by reviving the office of intendant.

Frontenac, however, was a man of dominant spirit, jealous of authority, prepared to exact obedience from all and to yield to none. In the course of events he soon became involved in quarrels with the intendant touching questions of precedence and with the ecclesiastics one or two of whom ventured to criticize his proceedings. The church in New France had been administered for many years by the religious orders; for the see of Quebec, so long contemplated, had not yet been erected. But three years after the arrival of Frontenac a former vicar apostolic, François-Xavier de Montmorency-Laval, returned to Quebec as bishop, with a jurisdiction over the whole of New France. In this redoubtable churchman the governor found a vigorous opponent who was determined to render the state subordinate to the church. Frontenac, following in this respect in the footsteps of his predecessors, had issued trading licenses which permitted the sale of intoxicants. The bishop, supported by the intendant, endeavored to suppress this trade and sent an ambassador to France to obtain remedial action. The views of the bishop were upheld and henceforth authority was divided. Troubles ensued between the governor and the Sovereign Council, over its expansion and over the corvées required to build the new forts. In particular, despite the opposition of bishop François de Laval, he supported selling brandy to the First Nations, which Laval considered a mortal sin. As the king and his minister had to listen to and adjudicate upon the appeals from the contending parties their patience was at last worn out, and both governor and intendant were recalled to France in the year 1682.

During Frontenac's first administration many improvements had been made in the country. The defenses had been strengthened, a fort was built at Cataraqui (now Kingston, Ontario), bearing the governors name, and conditions of peace had been fairly maintained between the Iroquois on the one hand and the French and their allies, the Ottawas and the Hurons, on the other. The progress of events during the next few years proved that the recall of the governor had been ill-timed. The Iroquois were assuming a threatening attitude towards the inhabitants, and Frontenac's successor, La Barre, was quite incapable of leading an army against such cunning foes. At the end of a year, La Barre was replaced by the marquis de Denonville, a man of ability and courage, who, though he showed some vigor in marching against the western Iroquois tribes, angered rather than intimidated them, and the massacre of Lachine on August 5, 1689 must be regarded as one of the unhappy results of his administrations.

The affairs of the colony were now in a critical condition; a man of experience and decision was needed to cope with the difficulties, and Louis XIV, who was not wanting in sagacity, wisely made choice of the choleric count to represent and uphold the power of France. When, therefore, on October 17, 1689, Frontenac arrived in Quebec as governor for the second time, he received an enthusiastic welcome, and confidence was at once restored in the public mind.[3] Quebec was not long to enjoy the blessing of peace.

On October 16, 1690 several New England ships under the command of Sir William Phips, governor of Massachusetts, appeared off the Island of Orleans, and an officer was sent ashore to demand the surrender of the fort. Frontenac, bold and fearless, responded with the famous words: "Non, je n'ai point de réponse à faire à votre général que par la bouche de mes canons et de mes fusils." ("I have no reply to make to your general other than from the mouths of my cannons and muskets."). Frontenac handled so vigorously the forces he had collected as completely to repulse the enemy, who in their hasty retreat left behind a few pieces of artillery on the Beauport shore.

The prestige of the governor was greatly increased by this event, and he was prepared to follow up his advantage by an attack on Boston from the sea, but his resources were inadequate for the undertaking. New France now rejoiced in a brief respite from her enemies, and during the interval Frontenac encouraged the revival of the drama at the Chateau St-Louis and paid some attention to the social life of the colony. 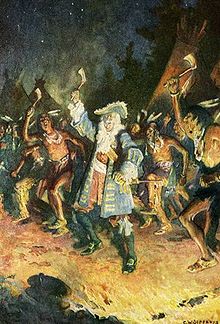 Frontenac with the Indians.

New France had been under constant Iroquois attack during the 17th century. The Iroquois, however, were not yet subdued, and for two years a petty warfare was maintained. The sufferings of the colony, infested by Iroquois war parties, were extreme. The fur trade, which formed its only resource for subsistence, was completely cut off, and a great accumulation of furs remained in the trading posts of the upper lakes, prevented from descending by the watchful enemy.[4] To meet the threat, he dispatched Jean Baptiste Bissot, Sieur de Vincennes to establish a trading post and fort at Kekionga, present day Fort Wayne, Indiana.[5] At a grand council of the friendly tribes, Frontenac took up a hatchet, brandished it in the air, and sang the war song, his officers following his example. The Christian Indians of the neighboring missions rose and joined them, and so also did the Hurons and the Algonquins of Lake Nipissing, while Frontenac led the dance, whooping like the rest. His allies, roused to martial frenzy, promised war to the death, and several years of conflict followed. At length, after three years of destitution and misery, Frontenac broke the blockade of the Ottawa; the coveted treasure came safely to Montreal, and the colonists hailed him as their father and deliverer.[4]

In 1696 Frontenac decided to take the field against the Iroquois, although at this time he was seventy-six years of age. On July 6 he left Lachine at the head of a considerable force for the village of the Onondagas, where he arrived a month later. In the meantime the Iroquois had abandoned their villages, and as pursuit was impracticable the army commenced its return march on August 10. The old warrior endured the fatigue of the march as well as the youngest soldier, and for his courage and prowess he received the cross of St. Louis. Under Frontenac's leadership, the Canadian militia became increasingly adept at guerrilla warfare and took the war into Iroquois territory and attacked a number of English settlements. The result was that the Iroquois would never again be a peril to the colony.

At the time of his second appointment as Governor in 1689, France authorized the importation of slaves to Quebec from the West Indies.

Frontenac died on November 28, 1698 at the Chateau St-Louis after a brief illness, deeply mourned by the Canadian people. The faults of the governor were those of temperament, which had been fostered by early environment. His nature was turbulent, and from his youth he had been used to command; but underlying a rough and hard exterior there was evidence of a kindly heart. He was fearless, resourceful and decisive, and triumphed as few men could have done over the difficulties and dangers of a most critical position.

Quebec's most famous building and landmark, the Château Frontenac, is named after him, as is the Kingston Frontenacs ice hockey team.

Many sites and landmarks were named to honor Louis de Buade de Frontenac. They include: