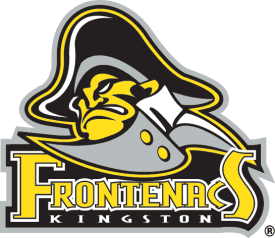 The "Frontenacs" name has been long associated with hockey in the Kingston area. Four other teams have been known as the Frontenacs.

The origin of the name "Frontenacs" comes from , governor of New France who established on the site of present-day Kingston. The area surrounding Kingston is .

The Kingston Canadians arrival in the Ontario Hockey Association (OHA) for the 1973–74 season, was a result of the switch to the (QMJHL) in 1972. During the summer of 1972, the QMJHL had threatened a lawsuit against the OHA to force the Junior Canadiens to return to the Quebec-based league. To solve the problem, the OHA granted the Junior Canadiens franchise a "one-year suspension" of operations, while team ownership transferred the team and players into the QMJHL, renaming themselves the in the process.

The OHA then reactivated the suspended franchise after a one year hiatus, under new ownership and with new players, calling the team the Kingston Canadians. The new Kingston team was essentially an expansion franchise promoted from the OHA's Tier II league, that had only common name to share with the old Junior Canadiens. The Tier II Frontenacs originated in the and date back to at least the early 1940s as the Kingston Victorias. However, in some OHA histories (such as the annual Media Guide) the Kingston team is still shown as the legitimate successors of the Junior Canadiens' legacy.

Following a change in ownership the club was renamed for one season in 1988–89. Due to ownership problems, the team was sold again following that season.

In 1989 the new ownership, including Wren Blair and Bob Attersley, renamed the team Kingston Frontenacs after the EPHL team of which they had both been members. The uniforms and logos were revived from the old franchise. The city embraced and welcolmed the new ownership.

Wren Blair and Bob Attersley were both hockey legends in their own right. In 1997 Wren Blair would be honoured with the Bill Long Award for distinguished service in the OHL.

The club was sold to the Springer family of Kingston in June 1998, with Doug Springer becoming the Owner and Governor.

The Frontenacs franchise is in quest of its first and first . The was the closest the team has come to either, where they lost the conference final to Peterborough. Had the Frontenacs won the conference that year, they would have also qualified for the Memorial Cup playing in the finals versus the host S.S.Marie Greyhounds.

The lone division title won by the Frontenacs was in the 1994–95 season where the team won the OHL East Division, represented by the . The Kingston franchise has the second-longest championship drought in the OHL (second to the by one year), and the fourth-longest in the .

Larry Mavety has coached the Frontenacs for most of the team's history. He was the coach and general manager of the Frontenacs for six years before stepping aside as coach in 2003 to concentrate on the general manager role. Mavety also was the Matt Leyden Trophy as he OHL Coach of the Year in 1989–1990. Mavety returned to coaching 12 games into the 2007–08 season on an interim basis after was relieved of his duties.

In 2003, Jim Hulton returned to his home town to become coach of the Frontencs. He played OHL hockey in Kingston with the Kingston Raiders team of 1988–89.

The Kingston Frontenacs have had one coach go on to the NHL as a coach and former NHL player. Dave Allison played with the Montreal Canadiens for 3 games in 1983–1984, and coached the Ottawa Senators for part of the 1995–1996 season.

Bruce Cassidy was announced as the new Frontenacs coach on , . He is a former NHL player with the Chicago Black Hawks, and previously coached the .

"(Multiple years in parentheses, totals include all incarnations of the Kingston franchise)"

is the only former member of the Kingston franchise to be inducted into the , getting the honour in 2004. In 1977–1978, Coffey played for the Kingston Canadians, as a late season addition from the North York Rangers. He played 8 regular reason games and 5 playoff games with the Canadians.

Four other numbers have been "honoured" from the , although they are not retired and remain in use. (#5 Mike O'Connell, #7 Tony McKegney, #10 Brad Rhiness, #14 Ken Linseman)

The original uniforms and logos of the OHL Frontenacs were revived from the EPHL franchise, which was affiliated with the Boston Bruins. The logo featured a yellow letter 'K' with a black outline, surrounded by black spokes leading to a yellow circle border with the name Kingston Frontenacs in black.

In 2002, the team adopted a new logo with a stylized Count Frontenac. The jerseys feature a star striping pattern similar to Dallas of the NHL, and a modified version of the former "K" logo is used on the shoulder.

In 2007, the Frontenacs unveiled a 3rd jersey, which will be black, yellow and white, and very similar looking to the jerseys from the early 1970s. The "K" logo will be used on the front of the jersey. The Frontenacs began wearing these jerseys on , , which was the same night that they opened their new arena.

The former home arena of the Frontenacs was the , with a 3,079 seated, and 3,300 including standing room. Built in , its ice size has unique dimensions of 200' x 92'. The Frontenacs' final game was played at the Memorial Center on February 15, 2008, a 6–4 win over the . Kyle Paige scored the final goal ever at the Memorial Centre.

The Kingston Frontenacs began play at their new downtown arena, the on February 22, 2008, in a 3–2 loss to the . The Frontenacs won their first game at the K-Rock Centre on February 24, 2008 defeating the by a score of 7–4.
* [http://www.ohlarenaguide.com/frontenacs.htm K-Rock Centre] The OHL Arena & Travel Guide
* [http://www.ohlarenaguide.com/fronts.htm Kingston Memorial Centre] The OHL Arena & Travel Guide