The Mikoyan MiG-31 (Russian: Микоян МиГ-31; NATO reporting name: Foxhound) is a supersonic interceptor aircraft developed to replace the MiG-25 "Foxbat". The MiG-31 was designed by the Mikoyan design bureau based on the MiG-25.[2]

The MiG-25 "Foxbat", despite Western panic about its tremendous performance, made substantial design sacrifices in capability for the sake of achieving high speed, altitude, and rate of climb. It lacked maneuverability at interception speeds, was difficult to fly at low altitudes, and its inefficient turbojet engines resulted in a short combat range at supersonic speeds.[citation needed] The MiG-25's speed was limited to Mach 2.83 in operations. But it could reach a maximum speed of Mach 3.2 with the risk of damaging the engines beyond repair.[3][4]

Development of the MiG-25's replacement began with the Ye-155MP (Russian: Е-155МП) prototype which first flew on 16 September 1975.[5] Although it bore a superficial resemblance to a stretched MiG-25 with a longer fuselage for the radar operator cockpit, it was in many respects a new design. The MiG-25 used 80% nickel steel in its structure to allow welding.[6] The Ye-155MP doubled the use of titanium to 16% and tripled the aluminium content to 33% to reduce structural mass. More importantly, supersonic speed was now possible at low altitudes. Fuel capacity was also increased, and new, more efficient low bypass ratio turbofan engines were fitted.

The most important development was introducing an advanced radar capable of both look-up and look-down engagement (locating targets above and below the aircraft), as well as multiple target tracking. This finally gave the Soviets an interceptor able to engage the most likely Western intruders at long range. It also reflected a policy shift from reliance on ground-controlled interception (GCI) to greater autonomy for flight crews.

Like its MiG-25 predecessor, the MiG-31 was surrounded by early speculation and misinformation concerning its design and abilities. The West learned of the new interceptor from Lieutenant Viktor Belenko, a pilot who defected to Japan in 1976 with his MiG-25P. Belenko described an upcoming "Super Foxbat" with two seats and an ability to intercept cruise missiles. According to his testimony, the new interceptor was to have air intakes similar to the Mikoyan-Gurevich MiG-23, which the MiG-31 does not have, at least not in production variants. While the MiG-31 was undergoing testing, an unknown aircraft was spotted by a reconnaissance satellite at the Zhukovsky flight test center near the town of Ramenskoye. The images were interpreted as a fixed-wing interceptor version of a swing-wing fighter codenamed "Ram-K". The latter was eventually revealed to be the Sukhoi Su-27 'Flanker', a wholly unrelated design.

Some upgrade programs have found their way in the MiG-31 fleet, like the MiG-31BM multirole version with upgraded avionics, new multimode radar, hands-on-throttle-and-stick (HOTAS) controls, liquid crystal (LCD) color multi-function displays (MFDs), ability to carry the AA-12 'Adder' missile and various Russian air-to-ground missiles (AGMs) such as the AS-17 'Krypton' anti-radiation missile (ARM), a new and more powerful computer, and digital data links.[7] A project to upgrade the Russian MiG-31 fleet to the MiG-31BM standard is nearing completion.[8]

Like the MiG-25, MiG-31 is a large twin-engine aircraft with side-mounted air intakes, a shoulder-mounted wing with an aspect ratio of 2.94, and twin vertical tailfins. Unlike the MiG-25, it has two seats, with the rear occupied by a dedicated weapon systems officer.[citation needed]

The wings and airframe of the MiG-31 are stronger than those of the MiG-25, permitting supersonic flight at low altitudes. Its Aviadvigatel D30-F6 turbofans, rated at 152 kN thrust, allow a maximum speed of Mach 1.23 at low altitude. High-altitude speed is temperature-redlined to Mach 2.83—the thrust-to-drag ratio is sufficient for speeds in excess of Mach 3, but such speeds pose unacceptable hazards to engine and airframe life in routine use.[3]

Given the MiG-31's role as Mach 2.8+ interceptor and the sustained afterburning this requires, its fuel consumption is higher when compared to other aircraft serving in different roles, such as the Su-27. Consequently, the aircraft's fuel fraction has been increased to more than 0.40—16,350 kg (36,050 lb) of high-density T-6 jet fuel. The outer wing pylons are also plumbed for drop tanks, allowing an extra 5,000 L (1,320 US gal) of external fuel. Late-production aircraft have aerial refueling probes.[citation needed]

MiG-31 is limited to only 5 g at supersonic speeds.[3] At combat weight, its wing loading is marginal and its thrust to weight ratio is favorable. However, it is not designed for close combat or rapid turning.[3]

The MiG-31 was the world's first operational fighter with a passive electronically scanned array radar (PESA), the Zaslon S-800. Its maximum range against fighter-sized targets is approximately 200 km (125 mi), and it can track up to 10 targets and simultaneously attack four of them with its AA-9 'Amos' missiles. It is claimed to have limited astern coverage, possibly due to drag chute housing above and between the engines. The radar is matched with an infrared search and tracking (IRST) system in a retractable undernose fairing.[3]

MiG-31 was equipped with RK-RLDN and APD-518 digital secure datalinks. The RK-RLDN datalink is for communication with ground control centers. The APD-518 datalink enables a flight of four MiG-31 to automatically exchange radar-generated data within 200 km (124 mi) from each other. It also enables other aircraft with less sophisticated avionics, such as MiG-25, to be directed to targets spotted by MiG-31.[9]

The MiG-31M-, MiG-31D-, and MiG-31BS-standard aircraft have an upgraded Zaslon-M radar, with larger antenna and greater detection range (said to be 400 km (250 mi) against AWACS-size targets) and the ability to attack multiple targets - air and ground - simultaneously. Zaslon-M have 1.4m diameter (larger) antenna, 50% to 100% better performance than Zaslon. In April 1994 used with an R-37 to hit a target at 300 km distance. Search range 400 km versus a 19/20 sq m RCS target. Tracks 24 targets at once, engages six. Supposedly able to engage launched Pershing-2 missiles in flight with long-range R-37 active radar-guided missiles. The back-seater's controls are replaced with modern multi-function displays. Its electronic countermeasures capabilities have also been upgraded, with new ECM pods on the wingtips.[citation needed]

The aircraft is a two-seater with the rear seat occupant controlling the radar. Although cockpit controls are duplicated across cockpits, it is normal for the aircraft to be flown only from the front seat. The pilot flies the aircraft by means of a centre stick and left hand throttles. The rear cockpit has only two small vision ports on the sides of the canopy. It is argued that the presence of the WSO (Weapon Systems Operator) in the rear cockpit improves aircraft effectiveness since the WSO is entirely dedicated to radar operations and weapons deployment. This decreases the workload of the pilot and increases efficiency. Both cockpits are fitted with zero/zero ejection seats which allow the crew to eject at any altitude and airspeed.[3]

Some upgrade programmes have found their way to the MiG-31 fleet, for example the MiG-31BM multirole version which includes upgraded avionics. In the cockpit this upgrade provides capabilities of using of new weapons, a new multimode radar, HOTAS controls and liquid-crystal (LCD) colour multi-function displays (MFDs). Only a small part of the fleet, however, has been upgraded to this standard.[10]

It has been claimed by Russian Federation Defence Ministry chief Colonel Yuri Balyko, that the upgrade will increase the combat effectiveness of the aircraft several times over.[11]

The MiG-31's main armament is four R-33 air-to-air missiles (NATO codename AA-9 'Amos') carried under the belly. The R-33 is the Russian equivalent of the U.S. Navy's AIM-54 Phoenix. It can be guided in semi-active radar homing (SARH) mode, or launched in inertial guidance mode with the option of mid-course updates from the launch aircraft and switching to SARH for terminal guidance. A more advanced version of the weapon, the Vympel R-37, which is the replacement for the older R-33, features folding stabilizers to reduce its stored size.[citation needed]

Other weapons include the old AA-6 'Acrid', originally deployed on the MiG-25, and the Molniya R-60 or Vympel R-73 short-range IR missiles, carried on wing pylons. Currently the entire MiG-31 fleet is being refitted to carry the newer Vympel R-77 on the wing pylons.[citation needed]

Unlike the MiG-25, the MiG-31 has an internal cannon, a six-barrel, 23 mm GSh-6-23 with 800 rounds of ammunition, mounted above the starboard main landing gear bay. The GSh-6-23 has a claimed rate of fire of over 10,000 rounds per minute. However, after two Su-24 were lost because of premature shell detonation in 1983, plus some different problems with gun usage (system failures, etc.), usage of the GSh-6-23 was stopped by a decision of the Soviet AF Command. The aircraft in the Russian AF were flying with fully operational guns, but without ammunition in January 2009.[12]

A side view of a MiG-31 from 790th Fighter Order of Kutuzov on the runway of Khotilovo airbase, Tver region.

The MiG-31 entered operational service with the Soviet Anti-Air Defense (PVO) in 1982. It was first photographed by a Norwegian pilot over the Barents Sea in 1985. The MiG-31 was sought after for a variety of long-range missions.

Following the collapse of the USSR in 1991, however, the budget for spares (MIG-31 AOG desk was created to solve this problem) and maintenance collapsed, leaving many squadrons unable to maintain their complex aircraft. By 1996, only 20% of remaining aircraft were reportedly serviceable at any time; however, by early 2006, a stronger Russian economy permitted the return to service of around 75% of the Russian Air Force's (VVS') MiG-31s.

Approximately 370 are in Russian service, with another 30 or so in Kazakhstan.[14] The MiG-31 will likely continue serving for years to come, depending on upgrades and future growth of the Russian economy.

On 6 September 2011, a MiG-31 crashed near Bolgary village, Perm region, Russia. The aircraft crashed shortly after take-off, killing both pilots. Another, non-fatal crash occurred in 2010. The entire fleet is grounded pending an investigation.[15][16]

A front view of a MiG-31 on the ramp of Khotilovo airbase, Tver region.

A new version of the MiG-31 with upgraded avionics, the MiG-31B, was introduced in 1990. Its development was the result of the Soviet discovery that Phazotron radar division engineer Adolf Tolkachev had sold information on advanced radars to the West. Tolkachev was executed, and a new version of the compromised radar was hastily developed. Many earlier MiG-31s were upgraded to the new standard, designated MiG-31BS.[citation needed]

Development of a more comprehensive advanced version, the MiG-31M, began in 1983 and first flew in 1986, but the dissolution of the Soviet Union prevented it from entering full production.[citation needed] Since 1991 and especially since 2000, most of the existing aircraft have been upgraded to the MiG-31M standard, also adding some additional features like Global Positioning System (GPS) and GLONASS receivers, and three color CRT MFDs in the rear cockpit.[17] In the VVS, aircraft designations are often repeated through the years.[3]

Several other variants have been developed, including a dedicated anti-satellite missile carrier, the MiG-31D; a similar satellite-launching aircraft, MiG-31A; a proposed multirole version, MiG-31F; and a downgraded export version, MiG-31E; but most have not been built in any quantity, if at all.[citation needed] 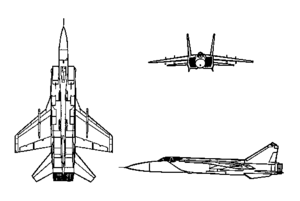