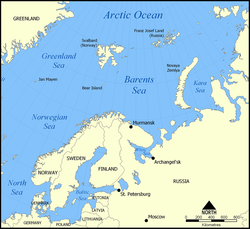 Location of the Barents Sea

The Barents Sea (Norwegian: Barentshavet, Russian: Баренцево море or Barentsevo More) is a marginal sea of the Arctic Ocean,[1] located north of Norway and Russia.[2] Known in the Middle Ages as the Murman Sea, the sea takes its current name from the Dutch navigator Willem Barents. It is a rather deep shelf sea (average depth 760 feet (230 m) and maximum depth 1,480 feet (450 m)), bordered by the shelf edge towards the Norwegian Sea in the west, the islands of Svalbard (Norway) in the northwest, and the islands of Franz Josef Land and Novaya Zemlya (Arkhangelsk Oblast) in the northeast and east. Novaya Zemlya separates the Kara Sea from the Barents Sea. Significant fossil fuel energy resources exist in the Barents Sea region.[3] 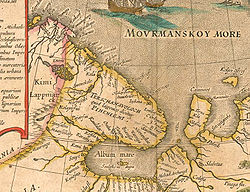 The southern half of the Barents Sea, including the ports of Murmansk (Russia) and Vardø (Norway) remain ice-free year round due to the warm North Atlantic drift. In September, the entire Barents Sea is more or less completely ice-free. Until the Winter War (1939–40), Finland's territory also reached to the Barents Sea, with the harbor at Petsamo being Finland's only ice-free winter harbor.

There are three main types of water masses in the Barents Sea: Warm, salty Atlantic water (temperature >3°C, salinity >35) from the North Atlantic drift, cold Arctic water (temperature <0°C, salinity <35) from the north, and warm, but not very salty coastal water (temperature >3°C, salinity <34.7). Between the Atlantic and Polar waters, a front called the Polar Front is formed. In the western parts of the sea (close to Bear Island), this front is determined by the bottom topography and is therefore relatively sharp and stable from year to year, while in the east (towards Novaya Zemlya), it can be quite diffuse and its position can vary a lot between years.

The lands of Novaya Zemlya attained most their early Holocene coastal deglaciation approximately 10,000 years before present.[4]

The International Hydrographic Organization defines the limits of the "Barentsz Sea" [sic] as follows:[5]

On the West. The Northeastern limit of the Norwegian Sea [A line joining the Southernmost point of West Spitzbergen [sic] to North Cape of Bear Island, through this island to Cape Bull and thence on to North Cape in Norway (27°45'E)].

On the South. The northern limit of the White Sea [A line joining Svyatoi Nos (Murmansk Coast, 39°47'E) and Cape Kanin]. 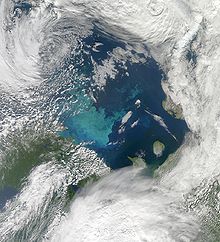 Phytoplankton bloom in the Barents Sea. The milky-blue colour that dominates the bloom suggests that it contains large numbers of coccolithophores.

Due to the North Atlantic drift, the Barents Sea has a high biological production compared to other oceans of similar latitude. The spring bloom of phytoplankton can start quite early close to the ice edge, because the fresh water from the melting ice makes up a stable water layer on top of the sea water. The phytoplankton bloom feeds zooplankton such as Calanus finmarchicus, Calanus glacialis, Calanus hyperboreus, Oithona spp., and krill. The zooplankton feeders include young cod, capelin, polar cod, whales and Little Auk. The capelin is a key food for top predators such as the North-East Arctic cod, harp seals, and seabirds such as Common Guillemot and Brunnich's Guillemot. The fisheries of the Barents Sea, in particular the cod fisheries, are of great importance for both Norway and Russia.

SIZEX-89 was an international winter experiment where the main objectives were to perform sensor signature studies of different ice types in order to develop SAR algorithms for ice variables such as ice types, ice concentrations and ice kinematics.[6] Although previous research suggested that predation by whales may be the cause of depleting fish stocks, more recent research suggests that marine mammal consumption has only a trivial influence on fisheries and a model examining the impact of fisheries and climate was far more accurate at describing trends in fish abundance.[7] There is a genetically distinct Polar Bear population associated with the Barents Sea.[8]

The harbour of the Murmansk Fjord.

The Barents Sea was formerly known to Russians as Murmanskoye Morye, or the "Sea of Murmans" (i.e., Norwegians), and it appears with this name in sixteenth-century maps, including Gerard Mercator's Map of the Arctic published in his 1595 atlas. Its eastern corner, in the region of the Pechora River's estuary, has been known as Pechorskoye Morye, that is, Pechora Sea.

This sea was given its present name in honor of Willem Barents, a Dutch navigator and explorer. Barents was the leader of early expeditions to the far north, at the end of the sixteenth century. Seabed mapping was completed in 1933 with the first full map produced by Russian marine geologist Maria Klenova.

The Barents Sea was also the site of a notable World War II engagement, a German surface merchant raiding attack on a British convoy that later became known as the Battle of the Barents Sea. Under the command of Oskar Kummetz, the German warships sink minelayer HMS Bramble and destroyer HMS Achates (H12), but in turn lost destroyer Z16 Friedrich Eckoldt and has Admiral Hipper severely damaged by British gunfire. The Germans later retreated and the British convoy arrived safely at Murmansk shortly afterwards.

During the Cold War, the Soviet Red Banner Northern Fleet used the southern reaches of the Sea as a ballistic missile submarine bastion, a strategy that Russia continues. Nuclear contamination from dumped Russian naval reactors is an environmental concern in the Barents Sea.

Oil exploration in the Barents Sea began in the 1970s. Discoveries were made on both the Russian and Norwegian sides. The first major producing field will be Snøhvit in the Norwegian sector. The largest discovery to date is the Shtokman field in the Russian sector. For decades there was a boundary dispute between Norway and Russia, with the Norwegians favouring the Median Line and the Russians favouring a meridian based sector. A compromise treaty announced 27 April 2010 settled the border in the approximate middle of these two stances.[9]