MiG aircraft were also used by the Chinese, North Korean, and North Vietnamese in aerial confrontations with American and allied forces. The Soviet Union sold many of these planes within its sphere of influence.

In 2006, the Russian government merged 100% of Mikoyan shares with Ilyushin, Irkut, Sukhoi, Tupolev, and Yakovlev as a new company named United Aircraft Corporation.[2] Specifically, Mikoyan and Sukhoi were placed within the same operating unit.[3] 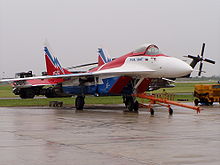 MiGs follow the convention of using odd numbers for fighter aircraft. However, this naming convention is maintained not directly by MiG, but by ordering institutions, such as Ministry of Defence or Council of Ministers' Military-Industrial Commission (while in Soviet Union). The original designations for MiG aircraft are 2- or 3-digit numbers, separated by a dot. 1.44 or 1.42 is an example of original naming. Although the MiG-8 and MiG-110 exist, they are not fighters. The MiG-105 "Spiral" was designed as an orbital interceptor, contemporaneous with the U.S. Air Force's cancelled X-20 Dyna-Soar.