For the butterfly, see Chliaria kina.

The Blue Tit (Cyanistes caeruleus[2] or Parus caeruleus[3]) is a 10.5 to 12 cm (4.2 to 4.8 inches,) long passerine bird in the tit family Paridae. It is a widespread and common resident breeder throughout temperate and subarctic Europe and western Asia in deciduous or mixed woodlands. It is a resident bird; i.e., most tits do not migrate.

This species was first described by Linnaeus in his Systema naturae in 1758 as Parus caeruleus.[4]

Most authorities retain Cyanistes as a subgenus of Parus, but the British Ornithologists' Union treats Cyanistes as a distinct genus. This is supported by mtDNA cytochrome b sequence analysis which suggests that Cyanistes is not only distinct, but not close to other tits (Gill et al., 2005). 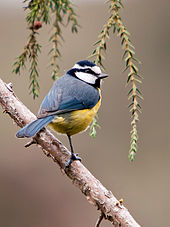 The systematics of the Blue Tit complex are disputed. There are currently at least nine recognised subspecies:[5]

The two traditional subspecies found in the Canary Islands (teneriffae) and northwest Africa from northern Morocco to northern Libya (ultramarinus) are distinctive. The Canary Islands subspecies has a black cap, and the African form has a blue back. Research is underway to split these populations into distinct species, with a peculiar "leapfrog" distribution (Kvist et al., 2005; Kvist, 2006; Sangster, 2006):

The former would contain three or four subspecies (palmensis, ombriosus and ultramarinus/degener), the latter the nominate P. t. teneriffae and the unnamed distinct form of Gran Canaria.

Pleske's Tit (Cyanistes × pleskei) is a not uncommon hybrid between this species and the Azure Tit in western Russia. 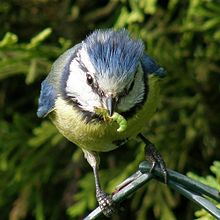 With food for its chicks in France

The common blue tit has an azure blue crown and dark blue line passing through the eye, and encircling the white cheeks to the chin, giving the bird a very distinctive appearance. The forehead and a bar on the wing are white. The nape, wings and tail are blue; the back is yellowish green; the under parts mostly sulphur-yellow with a dark line down the abdomen. The bill is black, the legs bluish grey, and the irides dark brown. The sexes are similar, but under ultraviolet light, males have a brighter blue crown. Young Blue Tits are noticeably more yellow.

The yellowness of the tummy is indicative of the number of yellowy-green caterpillars eaten, due to high levels of carotene pigments in the diet.[8]

This is a common and popular European garden bird, due to its perky acrobatic performances when feeding on nuts or suet. It swings beneath the holder, calling "tee, tee, tee" or a scolding "churr".

The song period lasts almost all the year round, but is most often heard during February to June.

The Blue Tit and the related hybrids are considered native species in areas of the European continent with mainly temperate or Mediterranean climate (except Iceland and Malta) and parts of the Middle East and North Africa.[1]

The Blue Tit has an average life expectancy of one-and-a-half to three years.[10][7] The longest recorded lifespans by country for the species are: 9 years 9 months 2 days in the United Kingdom,[11] and 11 years 7 months in the Czech Republic.[12] 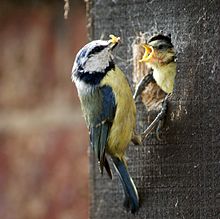 Feeding the young at a nest box in England

It will nest in any suitable hole in a tree, wall, or stump, or an artificial nest box, often competing with House Sparrows or Great Tits for the site. Few birds more readily accept the shelter of a nesting box; the same hole is returned to year after year, and when one pair dies another takes possession. It is estimated by the RSPB that there are 3,535,000 breeding pairs in the UK.[9]

The bird is a close sitter, hissing and biting at an intruding finger. In the South West of England such behaviour has earned the Blue Tit the colloquial nickname "Little Billy Biter".[by whom?] When protecting its eggs it raises its crest, but this is a sign of excitement rather than anger, for it is also elevated during nuptial display. The nesting material is usually moss, wool, hair and feathers, and the eggs are laid in April or May. The number in the clutch is often very large, but seven or eight are normal, and bigger clutches are usually laid by two or even more hens. It is not unusual for a single bird to feed the chicks in the nest at a rate of one feed every ninety (90) seconds during the height of the breeding season. Its colourful mix of blue, yellow, white and green make the blue tit one of the most attractive resident garden birds. Almost any garden with a peanut feeder will attract them and they readily breed in nest boxes. In winter they form flocks with other tit species and a garden with four or five at a bird table at any one time, may be feeding 20 or more at the same time.

Blue and Great Tits form mixed winter flocks, and the former are perhaps the better gymnasts in the slender twigs. A Blue Tit will often ascend a trunk in short jerky hops, imitating a Treecreeper. As a rule the bird roosts in ivy or evergreens, but in harsh winters will nest wherever there is a suitable small hole, be it in a tree or nesting box. Blue tits are very agile and can hang from almost anywhere.

Eating peanuts from a garden bird feeder in England

The Blue Tit is a valuable destroyer of pests, though it has not an entirely clean sheet as a beneficial species. It is fond of young buds of various trees, and may pull them to bits in the hope of finding insects. No species, however, destroys more coccids and aphids, the worst foes of many plants. It takes leaf miner grubs and green tortrix moths (Tortricidae). Seeds are eaten, as with all this family.

Blue Tits are able to culturally transmit learning to other Tit species. An example of this, dating from the 1920s, is the ability to open milk bottles with foil tops, to get at the cream underneath.[13] Such behaviour has been suppressed recently by the gradual change of human dietary habits (low-fat or skimmed milk instead of full-fat), and the way of getting them (from a supermarket, instead of the milkman).[14]

The small size of the blue tit makes it vulnerable to prey by larger birds, as well as some mammals such as grey squirrels.

The successful breeding of chicks is dependent on sufficient supply of green caterpillars as well as satisfactory weather. Breeding seasons may be affected badly if the weather is cold and wet between May and July,[15] particularly if this coincides with the emergence of the caterpillars on which the nestlings are fed.

Blue Tits are known to be host to feather mites, and rarely lice and flat flies. In Europe the only feather mite species known to live on the Blue Tit host is Proctophyllodes stylifer. P. stylifer however seems to be of no concern to the bird as, until now, it is only known to feed on dead feather tissue. P. stylifer lives all its developemental stages, i.e. egg, larva, protonymph, tritonymph and adult, within the plumage of the same host. The usual sites where P. stylifer is encountered are the remiges and the rectrices of the bird where they can be found tandemly positioned between the barbs of the rachis[16].

The Blue Tit is classified as a Least Concern species on the IUCN Red List (version 3.1),[1] and as a Green Status species, since 1996, by the Royal Society for the Protection of Birds in the United Kingdom.[9][7]